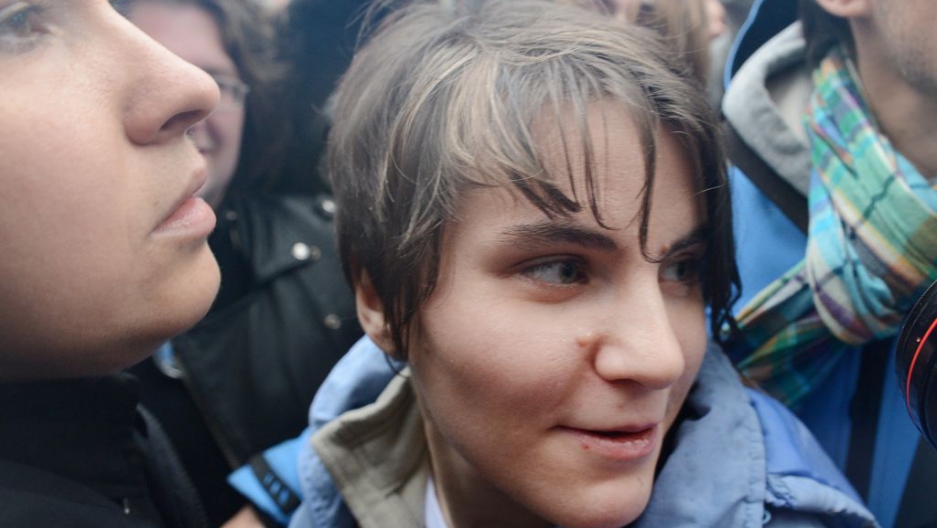 Yekaterina Samutsevich walks free after judges in Moscow suspended her sentence for "hooliganism" on Oct. 10, 2012. Two of her fellow members of Pussy Riot are still in jail.
Credit: NATALIA KOLESNIKOVA
Share

One member of Pussy Riot, Yekaterina Samutsevich, has been released on appeal – but two of her band mates remain in jail.

Samutsevich, 30, had her two-year prison sentence suspended at an appeal hearing for all three women in Moscow on Wednesday, RIA Novosti reported.

The judges accepted her lawyer's argument that Samutsevich had not taken part in the group's infamous "punk prayer" for Vladimir Putin's downfall, since security guards at Christ the Savior Cathedral had detained her before she could join fellow members on the altar.

They did not agree, however, with the other women's defense that their actions were a purely political protest – and not, as they stand convicted of, "hooliganism motivated by religious hatred."

Alyokhina, 24, and her band mate Nadezhda Tolokonnikova, 22, will now be taken to prison colonies to serve out their term, according to the Guardian.

The paper's correspondent, Miriam Elder, says the women hugged Samutsevich goodbye before she walked out of the courtroom, and into the arms of her father.

Defense lawyers have accused President Putin of "illegally influencing the court," RIA Novosti said, after he told a TV interviewer last weekend that the women had got what they deserved.

The defense team says it plans to take the case to the European Court of Human Rights, RIA reported.

Alyokhina had earlier warned the court that even if they were jailed, "we won't stay silent – even in Mordovia, or Siberia – however uncomfortable that is for you."