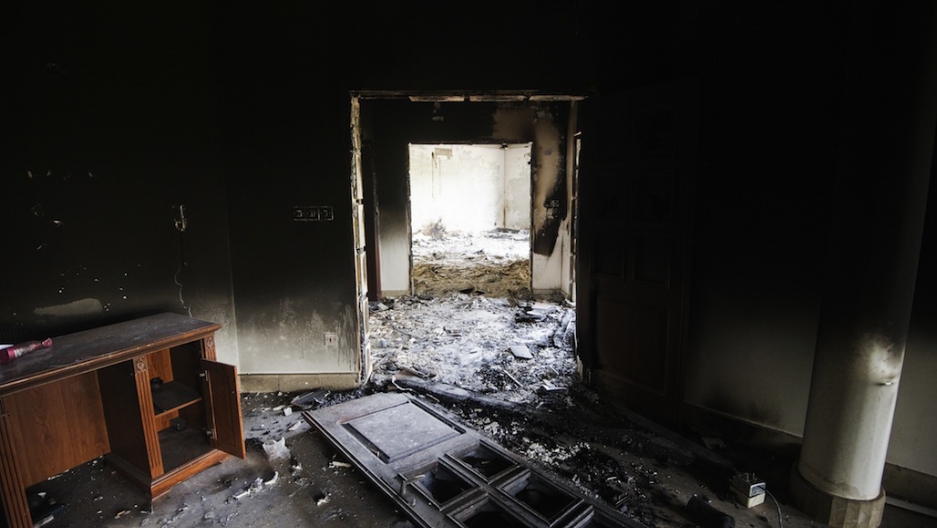 A picture shows damage inside the burnt US consulate building in Benghazi on September 13, 2012, following an attack on the building late on September 11 in which the US ambassador to Libya and three other US nationals were killed. Libya said it has made arrests and opened a probe into the attack, amid speculation that Al Qaeda rather than a frenzied mob was to blame.
Credit: GIANLUIGI GUERCIA
Share

At a congressional hearing on the Sept. 11 violence at Benghazi's US consulate on Wednesday, the dispute over security measures at the compound before the attack continued to escalate as a political issue between Republicans and the Obama administration.

A Special Forces soldier who commanded the security team in Benghazi until just before the attack told the congressional hearing that there were never enough personnel to protect the consulate, according to NBC News.

Lt. Col. Andrew Wood, who was stationed in Libya from Feb 12 to Aug. 14., told the hearing: "The security in Benghazi was a struggle and remained a struggle throughout my time there ... Diplomatic security remained weak."

He added, "The RSO (regional security officer) struggled to obtain additional personnel [in Benghazi], but was never able to attain the numbers he felt comfortable with."

Wood told the House Oversight and Government Reform Committee that because of the weak protection at the consulate, there was just one US diplomat stationed in Benghazi in April, The Washington Post reported.

Mitt Romney has made the president's response to the consular attack a focal point in criticism of Obama and his administration, and several members of the GOP have gone after the "lack of preparedness" at the US diplomatic post, CNN reported.

The department maintains that they did not conclude the violence was fueled by protests over the anti-Islam film "Innocence of Muslims," but instead was a planned terrorist attack, according to The Post.

Eric Nordstrom, the former Regional Security Officer at the US Embassy in Libya, also told investigators that the security in Libya was “inappropriately low," ABC News reported.

More from GlobalPost: US Embassy in Cairo Twitter feed gets feisty

"We have always made clear that we are giving the best information we have at the time. And that information has evolved," Patrick Kennedy, Under Secretary of State for Management, said in a prepared statement, referring to UN Ambassador Susan Rice's comments on September 16 that critics called deceptive.