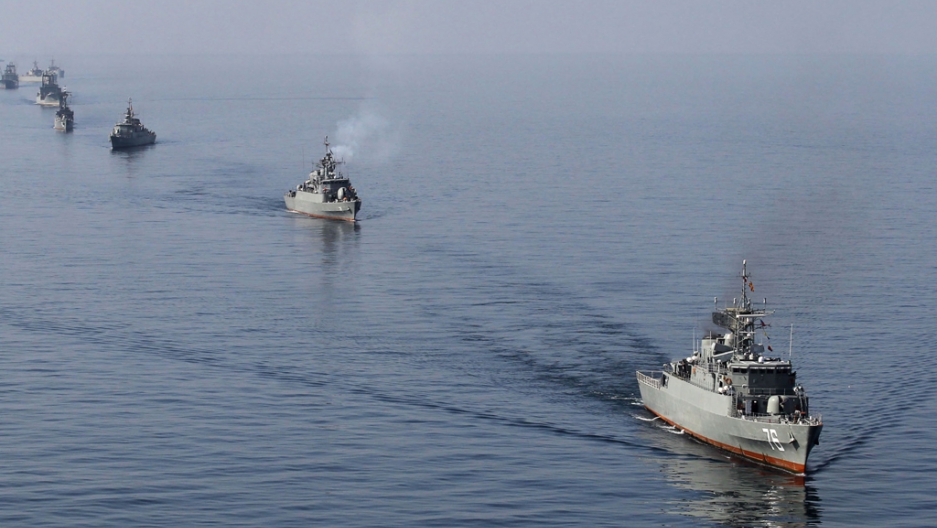 Iranian Navy boats take part in maneuvers during the "Velayat-90" navy exercises in the Strait of Hormuz in southern Iran on January 3, 2012. The United Arab Emirates opened an oil pipeline on July 15, 2012 to bypass the Strait of Hormuz, in light of Iran threatening to block the passage.
Credit: EBRAHIM NOROOZI
Share

LONDON — October, month of surprises: We have come to expect the unexpected.

Whether it's Black Tuesday (the Wall Street crash of Oct. 29, 1929), news of an impending deal to end a long, unpopular war (Henry Kissinger, “peace is at hand” in Vietnam, Oct. 26, 1972), or just the unlikely revival of a team with a well deserved reputation for choking (Boston Red Sox, October 2004), the term “October Surprise” has entered the dictionary, and rightfully so.

This year, the question hanging over the contest between Republican challenger Mitt Romney and President Barack Obama is particularly poignant: Will Israel strike at Iran’s nuclear program before the election? That scenario, Republican advisers fear, could result in an election eve surge of support for the sitting president by 5 to 7 points — the traditional reaction when US forces gird for possible action.

Republicans today are white hot about what some see as yet another example of the October surprise phenomenon: last week’s Labor Department revision to unemployment figures that tugged them conveniently down (for President Obama, at least) from 8.1 to 7.8 percent.

More from GlobalPost: Who flew the drone over Israel?

But the results of an Israeli decision to strike Iran between now and Nov. 6 would not only deal a potentially fatal blow to Mitt Romney’s presidential ambitions; it could also tip the entire world into something economists universally fear: a coordinated global recession prompted by a huge spike in global oil prices.

Robert McNally, who was senior international energy advisor in the White House's National Security Council during the last administration, says a dangerous gap has developed between what he calls “planet officialdom” and “planet market” on the likelihood of an Israeli strike in the very near future.

In effect, McNally says, past experience — the Gulf War and more recent Iraq War — has convinced oil traders and other market players whose activities move prices that the US military would quickly restore the flow of oil through the Strait of Hormuz should Iran take steps to interrupt that narrow channel, through which  17 million barrels of oil move per day, or 17 percent of all “sea-traded” oil.

But a decade of war games by US Navy planners have showed that is not a given. According to a source at the US Naval War College in Newport, Rhode Island, who asked to remain anonymous due to the sensitive nature of the information, several recent simulations showed it could take up to a month to re-open the Strait, and that Iran could inflict significant damage to US naval vessels attempting to do so.

There’s another problem: the vast majority of so-called “surplus capacity” — the extra production-ready capacity to increase global supply — lies north of Hormuz in Saudi Arabia and other Gulf facilities. For years, Western efforts to prevent a catastrophic increase in energy prices as result of a Persian Gulf crisis have relied on two levers: surplus Saudi production capacity, and release from US and European strategic petroleum reserves (SPRs).

Those two elements appeared to meet economists’ definition of an effective counterbalance to a panicked, supply starved market: the ability to replace up to 5 percent of global demand within 30 days and sustain it for 90 days.

More from GlobalPost: Is Netanyahu losing his mind?

Today, most oil experts agree, the numbers just don’t add up. Jim Krane, a Cambridge University expert on Gulf oil, says Saudi Arabia has lost its ability to be the “swing producer” who controls oil prices — the very essence of the protection-for-production alliances it has enjoyed with the United States since the mid-1970s.

“With domestic electricity demand rising 10 percent per year in Saudi Arabia, the kingdom now devours more than a quarter of its oil production — nearly three million barrels per day,” Kane wrote in The Wall Street Journal. “In the medium-term, Saudi Arabia is in danger of losing its all-important ‘reserve margin’ of oil production that so often calms market volatility. Loss of this spare capacity would remove a crucial safety mechanism from the global economy, to say nothing of tying America's hands when it comes to future moves against oil states.”

All of this is a prescription for market panic, record oil prices and a sharp dive for all of the world’s major economies back toward the economic abyss.

Given the nuclear question at the heart of the Iran standoff, perhaps it’s not surprising that more light is being shined on the military and political aspects of an October crisis in the Gulf.

Then again, there is a compelling precedent.

In 1980, officials of Ronald Reagan’s presidential campaign feared that President Jimmy Carter, then holding a slim lead, would announce a last-minute deal to free American hostages being held in Iran to seal his re-election. According to Iranian officials involved in those talks, Reagan campaign emissaries won a promise from Iran, which by that point loathed Carter, not to release the hostages before the vote. Congressional investigations subsequently disputed the charges, but questions remain.

Could Romney’s campaign, on far better terms with Benjamin Netanyahu than Obama’s White House, be trying to engineer something similar?

It’s quite possible. But the fact is that Netanyahu can add the numbers, too, and faces his own dilemma. Yes, a strike before the election could help ensure a second term for a president he clearly finds hard to deal with. Yet there will never be a moment when Barack Obama is as likely to stand unquestioningly behind an Israeli action as on the eve of a tight re-election battle.

With all this swirling, and with a third US carrier task force in the Gulf along with a French carrier, uncertainty prevails. With even the most perfectly designed and executed Israeli attack likely to set back Iran’s nuclear program only a few years, many are hoping that Iran’s current economic collapse will convince Israel and its hawkish American supporters to be patient.