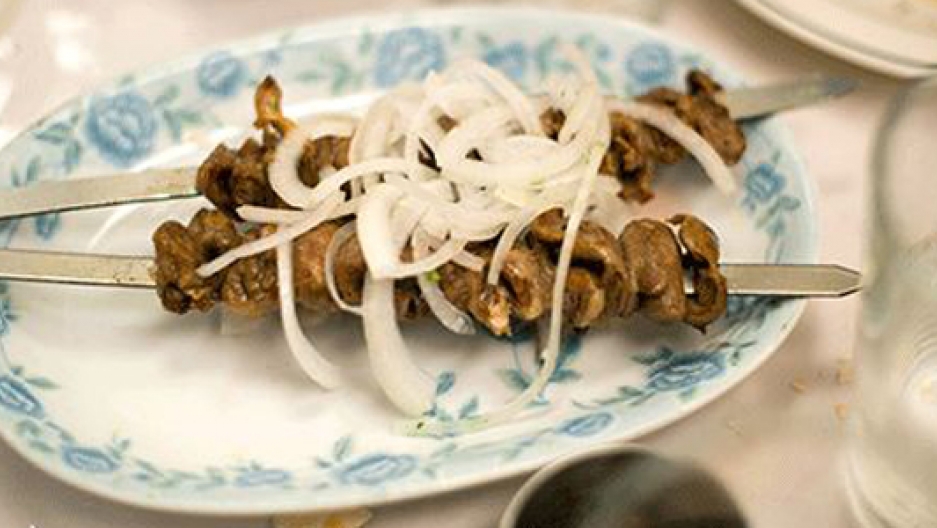 Share
There are picky eaters and then there are the Gastronauts of the world. "What's the oddest thing, by American standards, you've ever tried?" I asked Irina Lust. "The blood thing," she answered. "We had a blood dinner, everything was bloody. And I loved it. It's like red wine almost, but more like aged and spoiled and stinky but it tastes good. I like it." Lust is a member of the Gastronauts, a club for adventurous eaters in New York. The group spent one recent evening eating Uzbek, Bukharan Jewish food in Queens. "Eyeballs, that's probably my favorite weird thing I've had through doing this. Ben Raisher is another Gastronaut. "They're genuinely really amazing. I would eat eye balls every day if it was practical, he said." For better or worse, it's not. But even the most adventurous eaters have their likes and dislikes. Curtis Calleo is the Gastronauts' founder. Calleo said he can eat anything. Almost. "I don't like beans that much." In fact, Calleo would rather eat fried crickets and eyeballs than… beans. "I love eyeballs. I've had goat eyeballs that were spectacular." And he recently ate a tasty rat. It's Calleo's version of sushi — a food that he was kind of freaked about trying. "But then I put it in my mouth and I start to chew and I taste it," Calleo said, "and I go, 'ok do this is rat. And I'm eating it and it tastes good.'" And yes, Calleo laughed and said he would rather eat rat than beans. Why would someone choose rat over beans? Kelila Jaffe is the food program coordinator at NYU. She said the reason is simple. "You can kind of sum it up in three words: salt, fat and sugar." Beyond salt, fat and sugar she said there are a couple of theories. "You eat what you eat because the environment formed your culture, and it's very environmentally deterministic," Jaffe said. Because you only have certain things available to you. That's one possible reason certain cultures see insects as a tasty snack. Bugs are plentiful and a great source of protein. Then there's the other side of the debate. We eat what we eat because that's what our parents ate. It's what we recognize as food culturally. Take cheese. Jaffe says when cheese was first introduced into eastern Asia it was viewed as really disgusting. "Cheese is made from milk which is this white secretion that is squeezed out of the mammories of animals," Jaffe said. "And then you take it, introduce things like bacteria and mold, let it get funky. Until it actually stinks. And then you eat it. It's kind of gross." And once culture comes in, our food preferences can become even more complicated. So how DO we decide what's off limits? Is it nature? Or nurture? "Generally, things like stones and feces is pretty much a universal avoidance," said Psychologist Paul Rozin. He studies how humans relate to food at the University of Pennsylvania. He said it's mostly nurture. After all, humans are omnivores — there are a lot of different things we could eat. "You know, we don't eat bats, we don't eat rats," Rozin said. "We don't eat the most common mammals. Think about all the animals we could eat — we're practically eating nothing." Rozin said that's because almost all the food taboos in the world, are about animals. He said we think by eating animals we'll become more animalistic. So, instead of asking why we find meats, like rat, disgusting instead Rozin says we should be wondering — why do we make exceptions for beef or chicken? Well, we like them. And, in this culture, we disguise the origin of our animal food. Krissa Corbett Cavouras is a recovering picky eater in New York. "I don't even eat sunny side up eggs, I eat them scrambled. I want the yolk and the whites to have done their beautiful magic together in a quiche," Cavouras said. I convinced her to join me and Ben Raisher, the Gastronaut, at a Philippine restaurant Maharlika for a Balut tasting. Wondering what Balut is? Nicole Ponseca, restaurant owner, explained that it's a boiled, fertilized, duck egg. She brought out a plateful for Raisher and Cavouras to try. "Oh, it just looks so good," Raisher said, slurping it down. Cavouras was having a hard time. "So I'm looking at what I think is the yolk mostly. It's sort of veiny," Cavouras said. "But what jarred me was this little leg in here." When you crack the shell of your balut, you'll see a yolk, some white, the "soup." Really, it's embryonic fluid and a duck fetus. Ben ate most of the Balut. Cavouras did try the eggy part and the broth but she drew a line at the fetus. She says normally her food doesn't come with a face. "This is the most adventurous thing I've ever eaten by a power of, I'm gonna go with 5," Cavouras said. Raisher chimed in, "I don't know if you could call this the most adventurous thing I've had. Because in the Phillipines this is normal, this is not weird." "This literally is the equivalent of like, a hoho," restaurant owner Nicole Ponseca said, laughing. But Ponseca, who grew up eating Balut, said she's freaked out by milk. And that's the thing. Hoho or embryo, what seems good to you and gross to someone else, is kind of like turning milk into cheese. It all comes down to culture. What's the most adventurous thing you've eaten? Add your thoughts in the comments below.