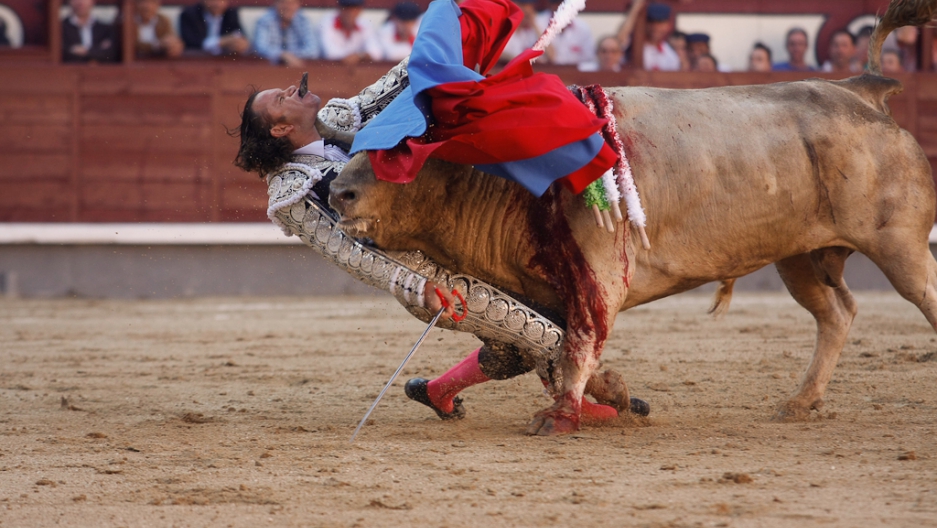 Spanish Bullfighter Julio Aparicio is gored by a bull during a bulfight of the San Isidro Feria at the Las Ventas bullring in Madrid, on May 21, 2010.
Credit: Alberto Simon
Share

A bullfighting festival gone-wrong in the small northern Colombian town of Sabanalarga left 30 people injured over the weekend.

According to Fox News, dozens of spectators ventured into the ring for a turn at taunting or chasing a bull, either on foot or on horseback. Many of the amateurs were tossed into the air by the bull's horns, leaving 10 of the 30 injured hospitalized in serious condition. The festival, which ended on Sunday, is held in honor of the Virgin of Mercedes.

Known as a "corraleja" in Spanish, the festival has taken place in the municipality at the beginning of every October since 1920, reported Stuff.co.nz. It is the only time amateur matadors are allowed to take part and jump into the ring.

Colombian paper El Heraldo identified one of the seriously injured men as 23-year-old Rafael Estrada, and said he died in the hospital from severe neck wounds and head trauma. According to festival attendees, Estrada had been trampled on several occasions, which ultimately lead to his death.

Some participants entered the ring intoxicated, giving them a false sense of security and increasing the risk of injury, reported Fox. In spite of the risks, hundreds of young men take part in the festival every year.

"If it made me afraid, I wouldn't do it," said bullfight participant Luis Arrieta, according to Fox. "You just do your job and keep going."