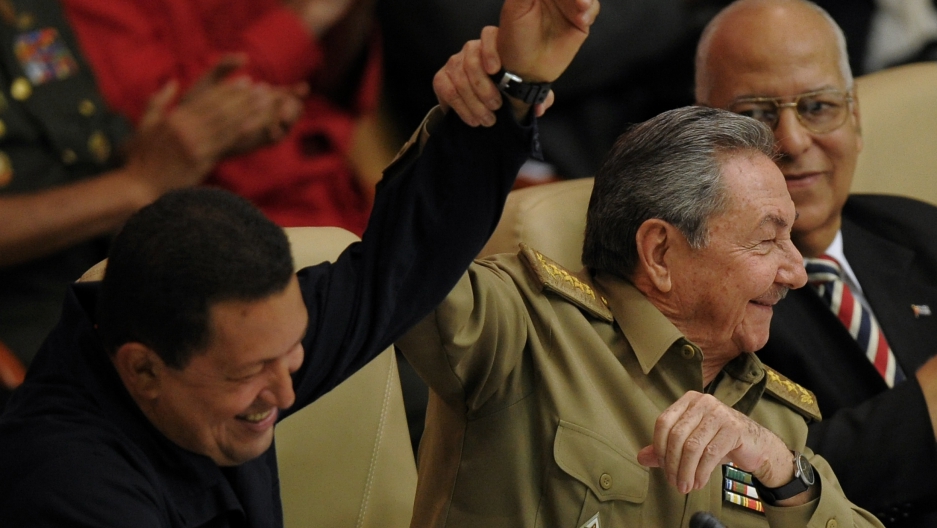 HAVANA, Cuba — In perhaps the most important election for Cuba in 50 years, the biggest winners were Fidel and Raul Castro.

And their names weren’t even on the ballot.

Hugo Chavez’s victory Sunday in Venezuela’s presidential contest was also a re-election of sorts for the Castros. When Chavez was diagnosed with cancer last year, it was Cuba’s leaders and their doctors who nursed Chavez back to health, restoring his strength in time for the campaign.

Now, by giving Chavez a new six-year term through 2019, Venezuelan voters have also essentially renewed their contract with Cuba, a deal worth tens of billions to Havana.

More than two decades after Cuba lost its Soviet benefactor, the Castros and their socialist system have come to depend heavily on the munificence of Chavez to keep the lights on and the air conditioners running. Trade between the two countries reached at least $6 billion last year.

Venezuela floats Cuba roughly 100,000 barrels of oil per day on easy credit terms, covering two-thirds of the island’s energy needs. And Chavez pays the Castro government billions more to send tens of thousands of Cuban doctors, nurses and other professionals to serve Venezuela’s poor — the same Venezuelans who have backed Chavez at the polls again and again.

Sunday’s vote put the entire partnership at risk. Opposition candidate Henrique Capriles had made a campaign issue of Venezuelan subsidies to Cuba, insisting that his country’s oil wealth would be better spent at home.

A Capriles victory would likely have dealt the island’s fragile economy a major blow, and had many Cubans fearing a new period of austerity and power blackouts.

Instead, Chavez’s re-election fluffs up a financial cushion for President Raul Castro, who is moving ever-so-slowly to implement long-overdue reforms to the island’s failed state-run economy. Had Chavez lost, Castro might have been forced to accelerate the adoption of additional market-oriented elements into Cuba’s socialist model.

Chavez’s victory also means that if Republican Mitt Romney wins the US presidency next month and makes good on a pledge to re-tighten economic sanctions against the island, the Castro government can simply shrug it off. With Venezuela’s backing assured, Havana will have little need to accede to US demands for democratic reforms.

On Monday the front page of Cuba’s Communist Party newspaper Granma carried a congratulatory note from Raul Castro to Chavez. “Your decisive victory ensures that the struggle will continue for genuine Latin American integration,” he said.

Cuba isn’t the only beneficiary of Chavez’s “Bolivarian” vision of pan-Latin unification. Some 20 nations in Latin America are members of Chavez’s Petrocaribe alliance, and also receive discounted oil that props up their economies and ensures friendly relations with their governments.

Still, no nation is as dependent as Cuba.

As many as 40,000 Cubans are currently working in Venezuela as doctors, nurses, sports trainers, computer technicians and other professionals, helping Chavez advance his ambitious social agenda.

The fate of those Cuban workers would have been thrown into uncertainty had Chavez lost, but his victory means that legions of Cubans will continue to look to Venezuela as a place to improve their families’ economic fortunes. Many Cubans who struggle on government salaries of $20 a month aspire to a foreign posting in Venezuela, even if it means risking their lives working in some of the country’s grittiest and most dangerous neighborhoods.

More from GlobalPost: Has the myth of Chavez been broken?

Chavez’s health is now the biggest unknown in the future of the Cuba partnership. The Venezuelan constitution mandates new elections in the event that the president dies during the first four years of his term. No other figure in Chavez’s circle appears to enjoy the same degree of popularity that he has.

But while Chavez campaigned with less vigor and energy than he has in previous races, he has not appeared to be on the verge of death from the disease, as several media reports have alleged. Since June 2011, Chavez has traveled frequently to Cuba for treatment and at least three surgeries for an undisclosed form of cancer, but now claims to be cancer-free.

In his victory speech, Chavez asked God for “life and health, to keep building this good nation ... this socialist nation,” a sign that health concerns were still on his mind.

As other Latin American leaders sent him their congratulations, a statement from Fidel Castro has been noticeably absent. The elder Castro, 86, hasn’t appeared in public in months, and has all but stopped publishing his blog-like “Reflections.”

Castro supporters and family members say he’s busy working on a book — with Chavez as his co-author.

More from GlobalPost: In-depth coverage and analysis of Venezuela's vote