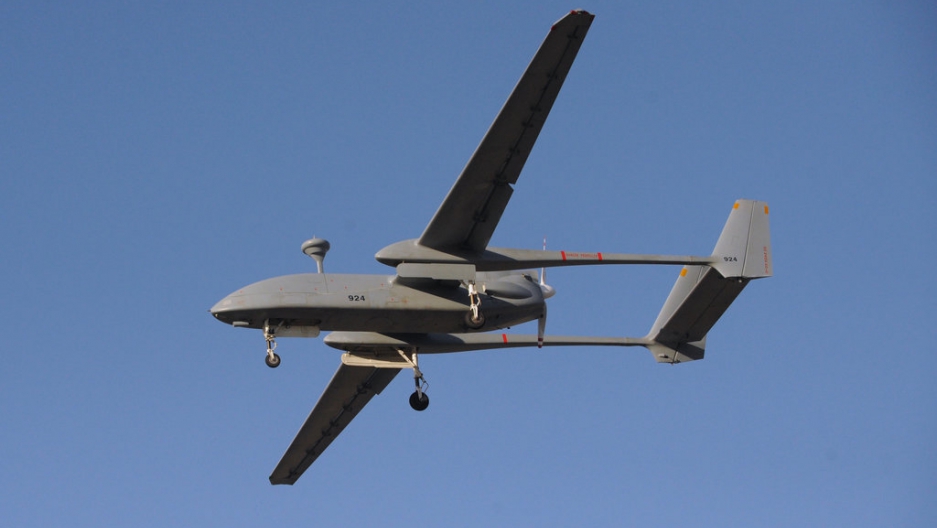 JERUSALEM — In the Middle East, it seems, you never know what is right around the corner. Or, as in the case of this weekend, barely above the clouds.

Just as it seemed the rhetorical war between Israel and Iran was subsiding, a wasp-like drone entered Israeli airspace and was downed by the Israeli air force over a populated area, shattering that new complacency.

In the 10 days since Israeli Prime Minister Benjamin Netanyahu's speech at the United Nations, in which he specified that the next substantial reassessment of Iranian nuclear intentions should take place by "spring of 2013," implying there would be no military action against the Islamic Republic before next summer, Jerusalem had been witness to a notable calming of nerves and oratory.

A number of factors seemed to have shifted the Israeli position from a state of constant warning to a more measured assessment of the nuclear threat. According to Meir Javedanfar, an expert on Iran at the Interdisciplinary Center, Herzliya, one factor is that Israelis have been watching the burgeoning social protests in Iran and the growing strain international sanctions have imposed on the Iranian economy.

More from GlobalPost: The drone age: The dangerous proliferation of unmanned aircraft

"The Israeli public sees what is happening in Iran, and that obviously makes them much more concerned about the legitimacy of going to war," he said. "Also, Israelis have seen the backlash from the Obama administration following Netanyahu's repeated calls to attack, or to set down public red lines — and that has put a supreme strain on our US relations, which is not popular in Israel."

Several other matters seem also to have come into play, including the growing political isolation of Netanyahu, who himself faces elections some time in 2013.

Just under the political radar, a rift between the right wing prime minister and his even more hawkish foreign minister, Avigdor Lieberman, appears to have made it plain to Netanyahu that continuing to threaten Iran with a unilateral strike, and continuing to goad Obama with the threat of Israeli military action, could provoke significant political setback.

Lieberman seems convinced by internal foreign ministry research showing that sanctions are having a significant effect and may even be weakening the Iranian regime.

The strategic leak of that assessment made the day of Netanyahu's speech at the United Nations, appears to have achieved its goal of warning Netanyahu that his coalition faced a significant challenge.

For one, Netanyahu could not convincingly threaten Iran if the support of his own ministers was in question.

"The foreign ministry issued a report saying that the sanctions are having a major effect, and Netanyahu hated this. In a case such as this, when the ministry professionals come to a conclusion that the politicians don't like, the matter goes straight to the minister," said Alon Liel, the former director general of Israel's Foreign Ministry.

"So I think Lieberman was influenced by real intelligence."

In addition to evidence of the sanctions' success, Liel said, conflict in Iran over support for the embattled regime of Bashar al-Assad in Syria, has caught Israeli's attention. The foreign minister, Liel points out, has recently started mentioning a "Persian Spring" in 2013."

"They've basically thrown $10 billion into the sea trying to shore up Assad. I think Lieberman has come to believe that there is nothing immediate to worry about, and this isolates the prime minister, at this point, from his foreign minister, his defense minister, from the president of the state and from the military high command. He must have seen how isolated he is."

The record of political personages listed by Liel include the top rank of those who have publicly come out and condemned the notion that Israel could unilaterally strike Iran's nuclear capacities, and delay Iran's nuclear production.

But two developments of the past weekend threaten, once again, may upend the working assumptions.

On Saturday, an unmanned aerial vehicle, more commonly called a drone, made its way down the Mediterranean coast before turning inland over Gaza and then flying well into Israeli airspace.

While the Israeli army has yet to say what the drone was doing, or who sent it, the veteran military analyst for Yedioth Acharaonoth, an Israeli daily, has accused Iran of furnishing Hezbollah, in Lebanon, with the drone, as a warning to Israel.

The assessment, which has not been denied, points to the opening of a new and more belligerent front.

Simultaneously, Iran may be changing its own tone.

Israeli media has been pointing to an interview granted by the hardline Iranian foreign minister, Ali Akbar Salehi, with the German magazine Der Spiegel, in which he floats the notion of a possible "trade-off."

"If our right to enrichment is recognized," Salehi said, "we are ready for a trade-off. We would, on a voluntary basis, limit the amount of our enrichment."

The grade of nuclear enrichment has been Netanyahu's primary concern, and was highlighted in his UN speech by the use of a graphic ticking bomb.

Salehi added that Iran would require "a guaranteed supply" of appropriate fuels from abroad, for this trade-off to become a possibility.