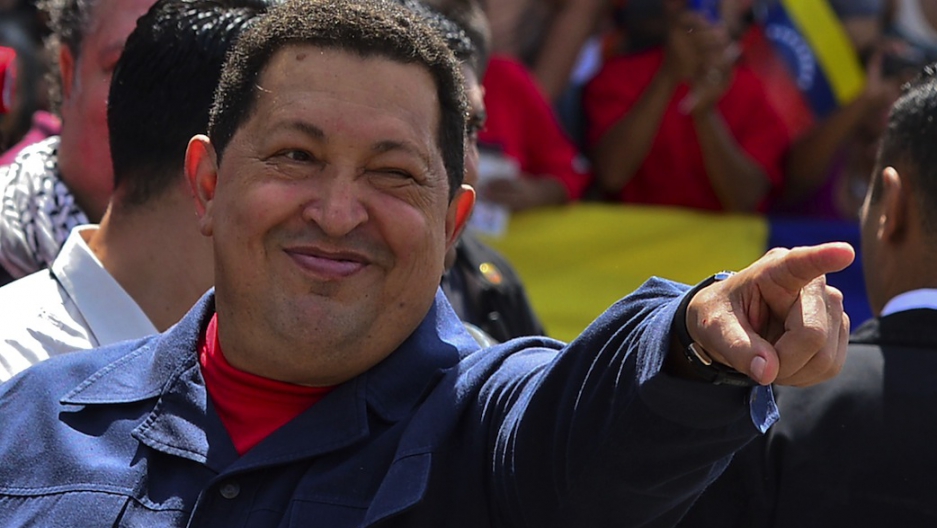 With 90 percent of votes counted, Chavez was ahead of Capriles, 54 percent to 45 percent, National Electoral Council President Tibisay Lucena said.

Lucena said that it was one of the largest turnouts in years, with 81 percent of the nearly 19 million registered voters casting ballots.

GlobalPost's Girish Gupta reported from Caracas that Venezuelans started lining up at the polls as early as 3 a.m. to make sure they were able to vote in the country's tightest presidential election since Hugo Chavez first came to power 13 years ago.

Gupta reported that Chavez voted in the highly politicized barrio of 23 de enero, where walls were plastered, as always, with murals of the president himself, along with other left wing revolutionaries like Che Guevara and Fidel Castro.

Chavez and his supporters were reportedly ecstatic after learning the results.

The Guardian reported that his supporters burst into cheers and songs of "Viva La Patria" and "Ooh Aah, Chávez won't go" upon hearing the election results.

"I'm crying with joy," Alirio Guevara, a fisherman from Vargas, who came to Caracas to vote, told the Guardian at the Chavez campaign headquarters.

"In the next six years, we will deepen the revolution," he said.

Chavez himself tweeted, "Thank you, my God. Thanks to everyone. Thanks my beloved people!!! Viva Venezuela!!!! Viva Bolivar!!!!!"

With his victory, Chavez will have another six years to push for his brand of socialism and an even bigger state role in the economy and cement his legacy, reported NBC News.

Capriles, if he had won, would likely have loosened state control over the economy and increased private investment.

Capriles congratulated Chavez on his win and encouraged his supporters to look to the future, reported AP.

“We have planted many seeds across Venezuela and I know that these seeds are going to produce many trees,” Capriles told supporters in a speech late Sunday.

Chavez's victory Sunday means he will serve until February 2019 if he remains healthy. Chavez is recovering from abdominal cancer and has had three surgeries and several rounds of chemotherapy, reports the Los Angeles Times.

If he serves out the remainder of his new term, Chavez will be the hemisphere's longest serving leader.

More from GlobalPost: In-depth coverage and analysis of Venezuela's vote