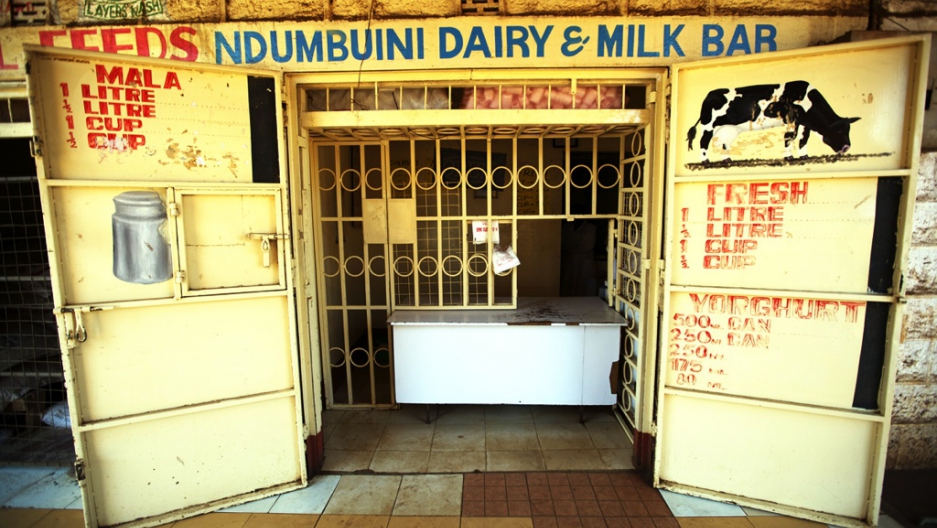 NAIROBI, Kenya — In modern Africa, it can be hard to tell where the city ends and the countryside begins.

Rural Kenyans flocking to the city in ever-greater numbers bring their cows and crops, while the fast-growing cities sprawl outward, gobbling up fields and forests.

The two worlds very much collide, overlap and merge into one another.

The urban farming that results in a place like Nairobi, one of the continent’s fastest-growing capitals, is a far cry from the trendy lifestyle choice sprouting in London or Manhattan. Here, it is born of necessity and offers, at once, a lifeline for cash-strapped families and, researchers warn, the risk of disease.

Driving toward the Nairobi suburb of Dagoretti, tall stalks of maize peak out between the neighboring walls of block apartments and banana trees peer over the tin-roofed shanties. Around corners appear little valleys patch-worked with smallholder plots known as shambas growing kale, spinach and carrots.

Gilbert Njuguna, 65, has always had cows. When Njuguna’s father died, the four-acre family plot was divided between him and his two brothers and his pair of cows would graze the neighborhood or feed on grass foraged from a nearby forest.

Today, the forest has been reduced to a few stands of tall trees, and the once-rural neighborhood has become a bustling satellite town. Yet Njuguna still keeps five cows and grows enough vegetables to feed his family on his little plot that slopes downwards into a river valley.

Five years ago officials from Kenya’s agriculture ministry arrived in Dagoretti to teach people about urban farming and “zero-grazing.” Njuguna’s cows are now kept in a pen and fed on course Napier Grass that he grows on his shamba.

Njuguna’s dairy cows produce 15 liters of milk a day, which he pours, fresh, into bottles and sells for about $0.40 to the nearby keeper of a “Milk Bar.”

The cows also produce a lot of manure. And this Njuguna funnels into an underground cistern where it turns into compost for his fields and produces enough biogas for cooking, saving him the $28 he used to spend on charcoal every month.

This is all good, as the Nairobi-based International Livestock Research Institute, points out.

“The benefits of urban livestock keeping are many: from improved food security, nutrition and health from livestock products, creation of jobs and protection from food price volatility.”

But the organization also warns: “The risks in urban livestock are also large: unsanitary conditions and weak infrastructure mean that livestock can be a source of pollution and disease.”

More from GlobalPost: Africa: The new frontline against Al Qaeda

Diseases that spread from animals to people are called zoonoses, the most famous recent examples being Avian Influenza and SARS. They thrive especially well in the chaotic context of unplanned urban development, where infrastructure fails to keep up with growth.

Africa’s urban population grew from 53 million in 1960 to 400 million in 2010. It is expected to almost double again over the next 20 years. Already about 40 percent of Africans live in urban areas, many in the slums that spread in and around the cities.

“The concentration of people and the mess of urbanization makes the emergence of new diseases more likely,” said Dr. Eric Fèvre, an epidemiologist working at the International Livestock Research Institute.

A study in the journal, “Tropical Animal Health and Production,” found that a quarter of infectious diseases in low-income countries, such as Kenya, come from animals. New examples emerge every four months. But the fear of these diseases is out of step with the real scale of the threat.

The answer, researchers argue, is not to legislate against keeping animals in urban environments, as governments often do, but to embrace and improve urban farming to make it safe and more hygienic.

Milk offers an example of how risks can be reduced, meaning that farmers get the financial benefit, consumers get the health benefit and potential disease can be checked.

Kenyans drink a staggering amount of milk, up to 100 kilograms a year each, with the vast majority bought on the informal market, at street stalls, milk bars or straight from the farmer, rather than processed, packaged and sold at a supermarket.

“In terms of GDP, milk is more important than [the staple crop] maize,” said Amos Omore, a dairy expert.

At the Ndumbuini Dairy and Milk Bar, co-proprietor Moses Mbugua oversees the sale of about 200 liters of milk a day. It is bought in bottles for takeaway, served in very white tea at wooden tables or made into yoghurt. Mbugua said that by boiling the milk for 10 minutes, then cooling and selling it, his customers can be sure of a hygienic product.

The milk bar opens at 5 a.m., when the first farmers arrive with their urns until 10 p.m. The busiest times are in the early morning and evening, directly after milking time. At a cost of $0.57 a liter, it is about half the price of supermarket milk and, Mbugua adds with a grin, “This is the freshest: Straight from the cow!”