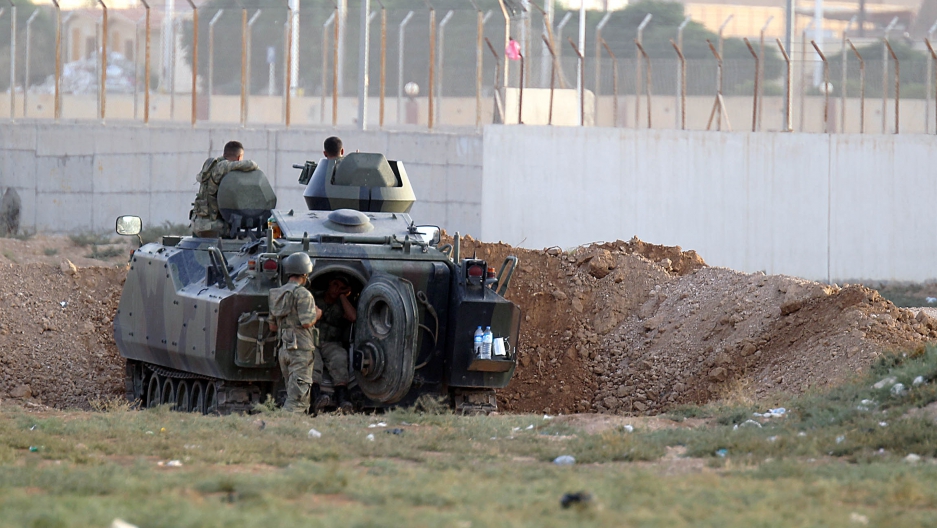 A Turkish army armoured personnel carrier is dug in on the border with Syria near Akcakale on October 7, 2012.
Credit: STR
Share

Tensions between Turkey and Syria have continued for the sixth day with reports that both sides are exchanging mortar fire.

The Turkish government has been bolstering its forces along the 560-mile border after a Syrian shell killed five Turkish citizens in a border town on Wednesday.

Turkish Deputy Prime Minister Besir Atalay said on Friday that Syria had apologized for the accident, AFP reported. But another shell was reported to have fallen into Turkish territory near the border town of Akcakale on Sunday, said the Associated Press, whose correspondent witnessed the explosion.

More from GlobalPost: How bad is it in Syria? Visit a hospital (VIDEO)

On Monday afternoon, Turkish news sources said a Syrian shell landed in the province of Hatay just a few hundred yards into Turkey, according to Reuters.

Both shells were followed by Turkish artillery fire into Syria, a response Turkey has said would proceed any errant bombing on its territory by Syrian forces.

It remains unclear if any targets were hit by Turkish forces.

On Monday, Turkish President Abdullah Gul said that the worst case scenario was now playing out in Syria and that Assad's fall was inevitable.

“The worst-case scenarios are taking place right now in Syria ... Our government is in constant consultation with the Turkish military. Whatever is needed is being done immediately as you see, and it will continue to be done,” Gul said, according to Reuters.

Syria, meanwhile, ramped up its rhetoric to match the escalating tension. The New York Times wrote that Syria had accused Turkey of having "imperialist delusions," in the words of the Times.

The Syrian government continues to deny that there is a popular uprising, instead blaming foreign agitators for the fighting.

Syria has not acknowledged the shelling into Turkey since Wednesday's incident.

The Syrian government has been battling rebels over control of border posts in recent months, both those leading to Turkey and to Lebanon, likely causing artillery shells to fall just over the border.

Syria and Turkey, once allies, have seen tensions mount in recent months.

France24 reported that Turkey has nearly 100,000 Syrian refugees living near the border and continues to openly support the forces opposing the Assad government.