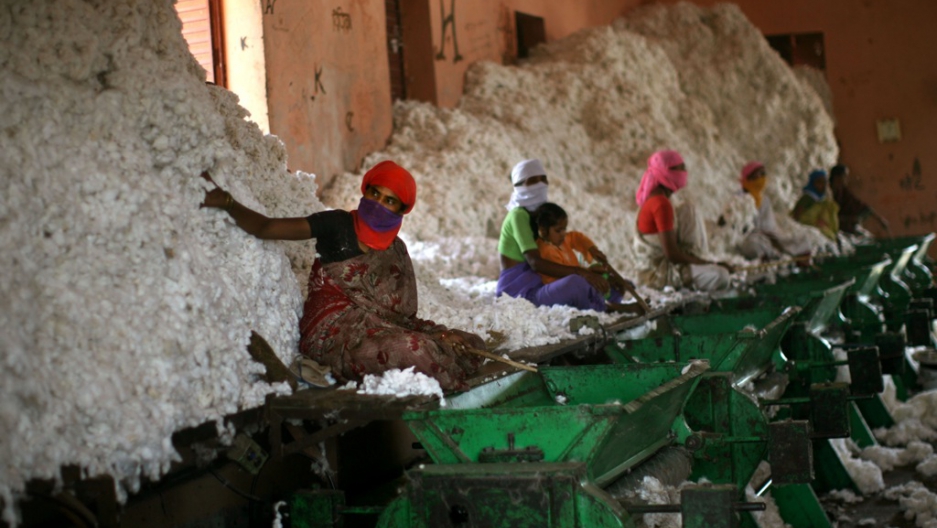 Workers are pictured at a cotton factory on April 9, 2008 near the town of Yavatmal in the Vidarbha region of Maharashtra state, India.
Credit: Uriel Sinai
Share

The third film of San Francisco film-maker Micha X Peled's globalization trilogy blames US agribusiness giant Monsanto for a wave of farmer suicides that has claimed tens of thousands of lives across India's cotton belt.

In "Bitter Seeds," which opens in theatres on the West Coast on Friday, Peled "suggests that impoverished cotton farmers in India have it especially tough because Monsanto has taken over the seed market with a genetically modified seed with hybrid technology that produces high yields but cannot renew itself," according to FirstPost.in.

Today, India's cotton farmers are deep in debt because they bought into Monsanto's genetically modified seeds. Though the seeds produce higher yields because the plants are pest-resistant, they are sterile by design, so farmers have to buy a new seed supply each year in addition to fertilizers and insecticides, the film argues.

“I’m just a dumb filmmaker,” the San Francisco Chronicle quoted Peled as saying. “I don’t have all the answers. But I wanted American viewers to spend a little time living with the experience of what it’s like for other people in other parts of the world to deal with what globalization brought them mostly as a result of what our multinational conglomerates are able to do.

“Hey, we like the cheap prices of shirts, and like the fact that the price of cotton is low. We’re benefiting from it, but what does that mean for the millions of other people?”

Nationwide, there have been more than 250,000 suicides by Indian farmers since 1995, with the cotton-growing districts of Maharashtra leading the way, according to India's Hindu newspaper.

But does Peled really have the facts to back up his claims that Monsanto is to blame?

A report from the International Food Policy Research Institute (IFPRI) in Washington said India’s adoption of pest-resistant Bt cotton varieties had led to massive increases in yield and a 40 percent decrease in pesticide use, FirstPost said. Meanwhile, yields of cotton have nearly doubled since Monsanto’s genetically modified cotton varieties were introduced. And India, which produced a record 35.3 million bales of the crop in the year ending on 30 June, 2012, is now the world's second-largest producer of the cash crop.

In that respect, it may not be the seed company or seed technology that's to blame, but India's financial system.

The IFPRI report said a lack of other sources of financing forced many Indian cotton farmers to borrow money from loan sharks. And high interest, together with predatory lending practices, was a greater reason for their despair than the cost of growing genetically modified cotton alone.