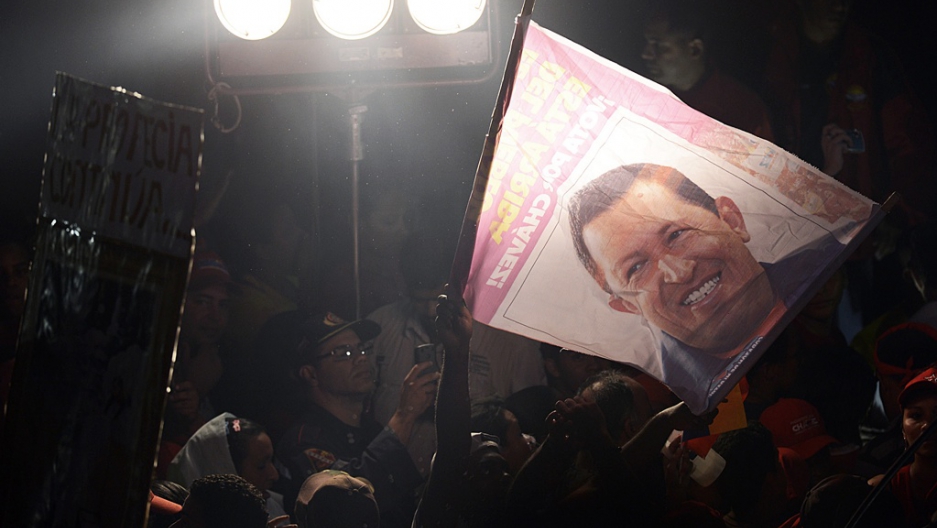 CARACAS, Venezuela — Some Venezuelans woke up Monday jubilant, and perhaps a little hungover, after news of President Hugo Chavez’s re-election.

Others were left questioning whether or not they should flee the country.

“I’m not happy,” said Maria Gomez, an elderly woman waiting for the bank to open in a wealthier area of Caracas. “I really thought the better candidate would win. We’re dead as a country.”

Those in line with her were equally distressed. One engineer said he would move his family to Spain.

Chavez, 58, defeated the youthful challenger Henrique Capriles Radonski — and first real threat to his 13-year hold on power — with 55 percent of the vote. The results came as a shock to many Venezuelans who believed Capriles had a good chance of winning the presidency, or at least drawing Chavez, who will now serve another six years, into a much tighter race.

More than 80 percent of the electorate voted, one of the highest turnouts in decades, demonstrating just how politicized the country has become. Many of the working poor in the “barrios” who had traditionally voted for Chavez said on Sunday they were looking for a change, tired of one of the world’s highest murder rates and the plethora of problems Venezuela faces.

More from GlobalPost: Complete coverage of the Venezuela election

But it was not enough for Capriles, whose advisers openly wept outside his campaign headquarters Sunday night. Unlike the 2006 election, which Chavez won in a landslide, many in the opposition genuinely believed this was their chance — that they would finally oust the man who, they say, has run Venezuela into the ground.

Meanwhile, outside the Miraflores presidential palace on Sunday night, Chavez supporters celebrated into the early morning hours. Fireworks were launched among a sea of tens of thousands wearing red. The incessant blaring of air horns was punctuated by motorcycles that roared through the crowd, doing wheelies through giant Chavez banners being strung across the road.

“The people have made their choice, the best thing for the country,” said Janeyvie Gonzalez, 24, as she pushed through the crowd.

Leaning against a wall of the palace, Isa Ramos, 27, said the results demonstrated the will of the people.

“We are patriotic,” she said. “We have chosen independence; we are constructing a new socialism, unique to Venezuela.”

Despite enduring his first close election, and a continuing battle with cancer, few expect Chavez to slow down.

“Venezuela will continue along the path of democratic and Bolivarian socialism for the 21st century,” Chavez said in a speech following his re-election.

The United States, which has a contentious relationship with the Venezuelan leader, made little secret of its disappointment. A spokesman for the US State Department encouraged the leader to listen to the voices of the opposition.

“We believe that the views of the more than 6 million people who voted for the opposition should be taken into account going forward," said spokesman William Ostick.

But few analysts expect the close election to affect Chavez’s policies. Instead, they say, Chavez is likely to push his 21st century socialism even further.

"Chavez will make his politics more radical in order to defeat the opposition before the regional elections," said Luis Vicente Leon, director of Caracas-based polling firm Datanilisis, which correctly called the election.

Chavez’s support lies predominantly among the poor, which he has been able to help by redistributing the country’s vast oil revenues.
Chavez’s health, however, could force him out of office before his six years are up. Doctors diagnosed the president with cancer last year and his health has been a rollercoaster ever since.

One Twitter hashtag played on Capriles’ “Hay un camino, there is a path,” tagline, suggesting #hayuncancer. Indeed, Chavez’s ill health might be the only path for the opposition to ever take power.
Despite the loss, Capriles managed to bring together an opposition that for more than a decade had been mired in internal bickering and unable to galvanize any meaningful support in the barrios.

"Capriles smashed the myth that the opposition could not unite against Chavez," said Carlos Romero, a political analyst at the Central University of Caracas. "In essence, they broke the myth that it was impossible to get close to Chavez and that he is invincible."