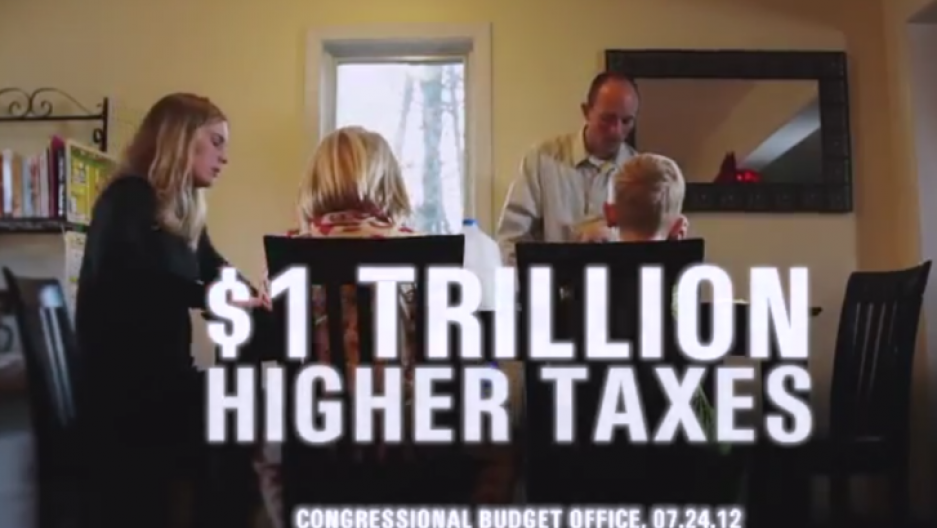 Bob Gardner says this ad from the Romney campaign, and another similar one from the Obama campaign, is so generic it could have been produced for any candidate.

Millions of dollars have been spent on election advertising this year.

But if you try and think back on theme, it's hard to think of any one ad in particular. There's no Daisy ad, so far at least, this year. There's no Morning in America.

At least according to some, the problem with this year's crop of ads isn’t that they’re mean, or contain fuzzy numbers. It’s that they’re boring.

In the 1950s, when the first campaign commercials hit TV, they were created by the top advertising talent on Madison Avenue — starting with 1952’s catchy jingle for Dwight Eisenhower. In 1968, an ad famously belly-laughed at Spiro Agnew as a candidate for vice president.

"The same people that would do great commercials for products and services would also do political commercials," advertising veteran Bob Gardner said. “But this ended a few decades ago. The political priesthood took over and they decided that Madison Avenue did not know how to do political ads, that political ads were a breed apart, and that was not the same thing as selling soap and toothpaste."

Take these two spots about tax policy from the Romney and Obama campaigns.

"They're so similar, one person could've done both," Gardner said.

And he isn’t hopeful for more creative ads later in the campaign.

"I know the Romney people have Madison Avenue as part of the team, but the control is still on the political side,” he said. “If you break the rules and you lose, you’re gone — you're banned from the Beltway."

Gardner has worked on several political campaigns over the years, including Gerald Ford's 1976 presidential race. He even wrote the music and lyrics for the song “I’m Feeling Good About America,” used in a Ford ad.

Gardner believes the Romney campaign missed its chance to introduce the candidate creatively.

"I don't think they defined who Mitt Romney was," Gardner said. "They let the Obama people talk about (Romney) being Bain Capital, and a ruthless capitalist, plutocrat, and I think that really drove up his negative (ratings).”