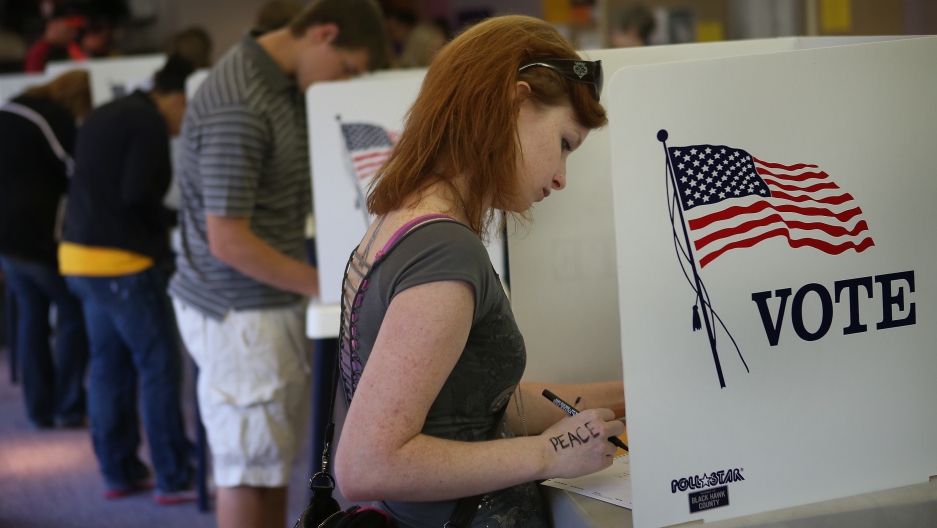 Student Courtney Johnson votes on the campus of the University of Northern Iowa on Sept. 28, 2012 in Cedar Falls, Iowa. Voters filled the polling place which had been set up on campus for early voting following a nearby rally with first lady Michelle Obama.
Credit: Scott Olson
Share

Judging by the brisk pace of early voters in the Auditor’s Office on a sunny Wednesday morning, he could be right.

Iowa is one of more than 30 states to allow “no excuse early voting,” meaning that no justification is needed to cast a ballot before Election Day. Iowa was the first swing state to begin in-person early voting, on Sept. 27. Ohio, another important battleground, opened its voting facilities on Oct. 2.

In Iowa, anyone who wants to vote before Nov. 6 has to request an absentee ballot. That can be done through the mail or in person, at the Auditor’s Office or a satellite station. A registered voter just shows up and fills in the absentee ballot on the spot.

The advantages of casting a ballot early are numerous, according to state officials.

“There is Iowa congeniality, wanting to help people out on Election Day,” said Slockett. Voters do not have to take time off from work, or wait in long lines at peak voting times, he added.

The biggest plus though, may be the removal of a major annoyance.

“If you vote early they stop calling you,” said Slockett. “The campaigns are pretty well organized these days. Once they check you off as having voted, they take you off the list for robo-calls. The sale has been made.”

In Iowa, that figure may be even higher. Statewide, election officials have already received more than 274,000 absentee ballot requests. The majority of the requests are from Democrats — more than 150,000, with just over 61,000 for Republicans. The remainder are from those with no stated party affiliation.

In Johnson County, as much as 55 percent of the vote may come from absentee ballots, according to blogger and activist John Deeth, who has been studying Iowa voting patterns.

Certainly those who monitor polling stations have noticed the increase.

“We saw triple the number of voters this year over 2008,” said Kara Logsden, community services coordinator for the Iowa City Public Library, which hosted a satellite voting station on Sept. 27. According to Logsden, the library is the city’s premier satellite station. “We had 766 votes cast in just one day,” she said.

Iowa is unique among states in that almost any place can serve as a satellite polling station. All it takes is a petition with 100 signatures, and a hospital, a church, or a grocery store can transform itself into an official election site. The minimum time period is six hours, but a site can function for one day or several.

Early voting is a good sign for Democrats, said Slockett. “The Obama campaign has been incredibly effective at getting voters out early,” he said. “They have a very organized campaign and they have worked hard. The Republicans have taken a partisan position on early voting, saying that they are concerned about election fraud. This costs them votes — people like the convenience of being able to vote early.”

“So far we’ve had 9,981 requests from registered Democrats, 1,762 requests from Republicans, and 3,273 requests from those registered as No Party,” he explained. “But the No Party people tend to be young, and they tend to vote in roughly the same proportions as the general population.”

Iowa City is home to the University of Iowa, and is considered something of a liberal bastion in the state. According to Deeth, it may not representative of the state as a whole.

“This is by far the most Democratic county in Iowa,” he said. “But Democratic numbers are up all over the state. The president has a clear advantage right now.”

Iowa is considered a swing state, meaning it is too close to call. With just six electoral votes it would not ordinarily merit so much attention. But in a race as close as this one, every vote counts.

“We’re getting used to all the attention,” laughed Deeth.

Early voting can serve as a hedge against any last-minute attacks by one candidate on his opponent; it also precludes the possibility of any late-breaking news swinging the election one way or the other.

Just take the first presidential debate last Tuesday night. Anyone who had already voted early in Iowa would not have been swayed by the performances of the candidates. Most pundits give the wreath for performance to former Massachusetts Governor Mitt Romney. President Barack Obama, they say, was listless and passive, and missed several opportunities to exploit his challenger’s weaknesses.

More Highway 2012: No knockout for Romney but maybe a turnaround in first debate

But according to some observers, this race has so few undecided voters that the debates will most likely have minimal impact.

“People watch the debates to cheer their candidate on,” said Deeth. “Those few who are undecided don’t really like either one of them, and it would probably be too much work to sit down and watch the whole show.”

Romney did get a bounce in the polls following the debate; his favorability ratings have gone up for the first time in weeks, although it is not yet possible to determine whether this is a momentary reaction or a long-term trend. There are two more presidential debates before Nov. 6, as well as one contest between the vice presidential candidates.

But in Iowa, conventional wisdom holds that early voting will not significantly affect the outcome.

“People’s minds are made up,” said Deeth. “They can’t wait to vote. They say ‘at least now they can stop calling me.’”