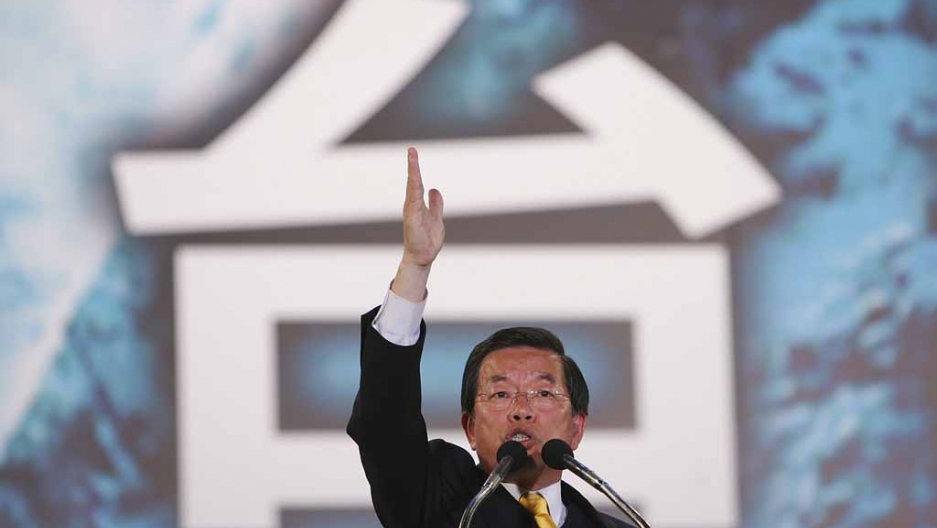 Taiwan's opposition heavyweight, Frank Hsieh of the Democratic Progressive Party, made a trip to the mainland on Thursday.
Credit: MN Chan
Share

TAIPEI, Taiwan — It wasn’t too long ago that the only thing Taiwan and China could agree on was that there was little common ground between them.

But that was before Taiwanese companies helped build the gold rush across the Taiwan Strait and China’s economic might began translating into political and economic gains both in the region and on this diplomatically marginalized island republic.

In perhaps the clearest example yet of how much Beijing is shaping Taiwan’s domestic political landscape, opposition heavyweight Frank Hsieh made a trip to the mainland on Thursday.

Hsieh, a former premier with the independence-leaning Democratic Progressive Party (DPP), is the first senior member of the party to hold out an olive branch to Beijing. China considers Taiwan a renegade province and has vowed to invade the burgeoning democracy should it declare formal independence.

For its part, the DPP is split over whether it should begin a dialogue with Beijing following its loss in last year’s presidential elections to nationalist party Kuomintang (KMT) incumbent Ma Ying-jeou.

More from GlobalPost: From Taiwan to China, workforce ventures across the strait

Under the leadership of Chen Shui-bian, who is now serving a lengthy prison term for corruption, the DPP won the island’s second free presidential elections in 2000, breaking the KMT’s 53-year stranglehold on power.

But Chen’s two-term administration polarized the electorate as China-Taiwan relations plummeted and the United States, a chief backer, sent subtle signals that it preferred the more conciliatory and less explosive approach of the KMT.

“The Hsieh trip is a positive development for the DPP. It’s trying to reach out, increase contacts and build some degree of understanding. It also sends a signal to the outside world that the DPP is more rational by adjusting its [China] policy,” said George W. Tsai, a professor at Taipei's Chinese Culture University, and vice president of the Taiwan Foundation for Democracy.

Tsai says that US influence over the island will wane as China’s increases, assuming that the world’s second-largest economy continues to be politically stable and its economic growth rates remain high.

“The DPP is directly or indirectly under tremendous Chinese pressure. It has to face this reality. The China factor is there, and is going to be there as their influence grows stronger. It will become politically stronger. That’s the inevitable reality. We cannot avoid that,” he said.

It’s a situation that has been compounded by Ma’s administration, which has moved quickly to cement ties by ushering in a number of landmark investment, trade and tourism pacts between the two sides.

The Harvard grad has also said he wants to sign a peace accord with Beijing before he leaves office in 2014. China and Taiwan, under its official moniker the Republic of China, are still technically at war following Chiang Kai-shek’s capitulation to communist forces in the Chinese Revolution and his eventual exodus to the island in 1949.

"The DPP should face China's rise ... if the DPP keeps refusing to change its position and let the Kuomintang and the Chinese communist parties work hand in hand, I'm afraid the DPP will never be able to get back into power," Hsieh said at a media briefing earlier this week.

Highlighting this “hand-in-hand” approach is the ongoing spat with Japan over the Diaoyu Islands, known as the Senkaku in Japan. Taipei and Beijing make similar claims over the oil- and gas-rich rocky outcrop to legitimize one another’s positions.

The US, long Taiwan’s strongest supporter, initially said it had no position in the dispute, but later tipped its hand by also saying it was bound to defend Japan under its security pact with Tokyo if the islands came under attack.

“One can read between the lines. The US plays it very coy. It hasn’t even made a decision on the sovereignty of Taiwan. It has a long history of playing its cards that way. Some call it strategic ambiguity. But regarding Taiwan, 67 years is a heck of a long time to be ambiguous,” said Jerome Keating, a former National Taiwan University professor.

While US official policy on Taiwan is “undecided” over who should have sovereignty over the islands, sources say that Taiwan’s increasing willingness to indirectly work with Beijing against Washington’s interests is starting to ruffle American feathers.

Territory in the South China Sea is equally as hotly disputed. Taiwan and China claim the vast majority of the body of water stretching from China’s eastern seaboard to Malaysia’s Borneo. China and Taiwan claim about 3.5 million square kilometers of the resource-rich sea based on “historical evidence” that Chinese fishermen once plied its waters and trade routes and desolate outcrops were established centuries ago.

“Politically and militarily we can’t cooperate with China, but indirectly we can have some association in the South China Sea or Diaoyu Islands. The US has every right to serve their interests, but if we have to align with somebody on these claims then we need to look after our own,” said Tsai.