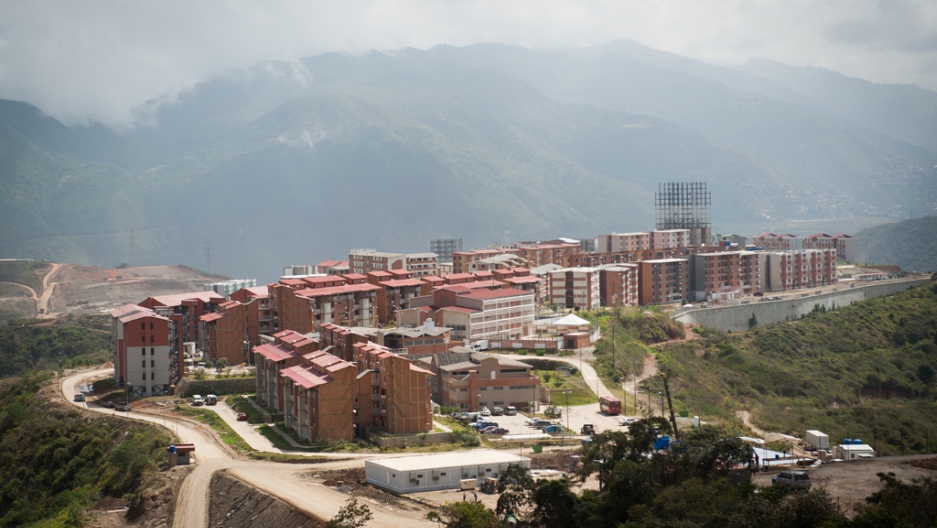 View of Caribia, a town on the outskirts of the Venezuelan capital city of Caracas. President Hugo Chavez had Caribia built as one his "socialist cities," in which he plans to give away 20,000 apartments to Venezuelans.
Credit: Leo Ramirez
Share

CIUDAD CARIBIA, Venezuela — A dirt road winds up into the hills of the Avila mountain, a lush backdrop to Caracas. It is littered with construction equipment and men at work.

After climbing the path through red-painted street lights, the hills reach a plateau on which sits President Hugo Chavez’s flagship housing project, a supposed paradise city built on his self-styled socialism featuring schools, shopping malls and churches. Many of the windows are plastered with posters of Chavez.

The site will one day house 100,000 people in an area of 27 square kilometers (10 square miles), according to the government. The first wave of more than 1,000 families arrived in August last year.

“I’ve got three bedrooms, a living room, kitchen and two bathrooms,” says Angelica Perez, 33, sitting outside a heavily subsidized socialist coffee shop. Perez arrived here from one of the city’s many slums, which are dangerous and lack any serious infrastructure.

“I don’t only support Chavez because I’ve received a house. I consider him the only president that’s done anything for Venezuela. My life has changed completely. We have everything!”

The project is one of many all over the country forming part of the Grand Mission for Venezuelan Housing, an ambitious operation aiming to build 3 million houses by 2019, hoping to yank millions out of poverty.

More from GlobalPost: Bullets to ballots — today's LatAm strongmen cling to power at the polls

“We’ve delivered 253,000 homes in a year and a half,” the 58-year-old president said, speaking in another one of the government’s “socialist cities” two weeks ago. “This has only been possible through revolution: political, economic, social and technical revolution. By 2019, there won’t be a single Venezuelan family without a worthy home.”

It's gifts like these that have helped loft Chavez's approval rating consistently above 50 percent and could help him clinch another six-year term in Sunday's election.

However, all may not be as rosy as it seems. It’s difficult to verify the number of houses built. Some from the private sector may have been artificially added to the count.

And the houses are not the sturdiest. A third-floor wall blew right off one apartment block in Caribia in June, according to a New York Times report.

Critics say the missions are simply a means of buying votes, with cash coming in from high oil prices and unsustainable bond sales. But ultimately this doesn’t matter, at least in electoral terms. Regardless of where the money comes from, the missions’ underlying intention and even the quality of the houses, it seems that when people receive free handouts, their vote is nearly always gained in return. Everyone GlobalPost spoke to in Ciudad Caribia said they would vote for Chavez in Sunday’s election.

State television often shows off government officials giving over houses to the poor, the recipients often crying with joy. Those images go some way in explaining the religious fervor that takes over at the president’s campaign rallies.

“Everyone has a friend of a friend who's been helped by the government,” said Yesman Utrera, 24, speaking in his own barrio in the west of Caracas and hinting at the long and sometimes hopeless wait for their own property that the majority of poor Venezuelans face.

Still, seas of red-clad supporters are descending on towns and cities across the country as Chavez prepares for his toughest election yet, against state governor Henrique Capriles Radonski.

Capriles, 40, is the first opposition leader to have gained support in the barrios, Chavez’s traditional heartland. However, countering the president’s immense state machinery, built up over 13 years in power, is an uphill struggle, as Capriles himself has admitted. “It’s an abuse of power,” he said earlier this year.

“Chavez is the president of a country with many natural resources under executive control,” says Carlos Romero, a political analyst at the Central University of Venezuela. Indeed, with the world’s largest oil reserves to back up the projects as well as strategic alliances with China, Russia and some of Washington’s foes, Chavez can afford to be ambitious.

Romero adds that Chavez has a charisma that his opponents cannot match. Singing, dancing and playing guitar on stage endears many, as does his use of language, often identifying with the country's poor.

When Chavez took to the stage at an auditorium just outside Caracas a couple of weeks ago, he began singing the first line of the country’s national anthem. Immediately everyone stood, many with their hands on their hearts, and Chavez didn’t need to sing another line. His command of the crowd, and by extension many Venezuelans, echoes that of rock stars rather than presidents.

At rallies, his truck is always surrounded by a scrum that competes with the mosh pits of the world’s biggest rock groups. The words from supporters are often the same, littered with cries of “El Comandante” and the good he has done for the country.

While other world leaders are capable of rousing intense passions, Chavez takes it a step further, to Messianic levels. Chavez is not seen as the head of his United Socialist Party of Venezuela (PSUV) but as the government itself. Six months ago, Capriles was inaugurated as the leader of the opposition, a hitherto ragtag team that had never made any ground against the president. Over the last few weeks, his star has been rising, indicated by his featuring on memorabilia all over the Caracas’ streets.

Whether Capriles’ stardom is enough to outshine that of the master of public relations that is Chavez is a question that will be answered on Sunday.

“I will not aspire to be a Messiah,” Capriles said at a huge rally through Caracas last weekend, though it is only through some Messianic populism that he can hope to put an end to Chavez’s long tenure.