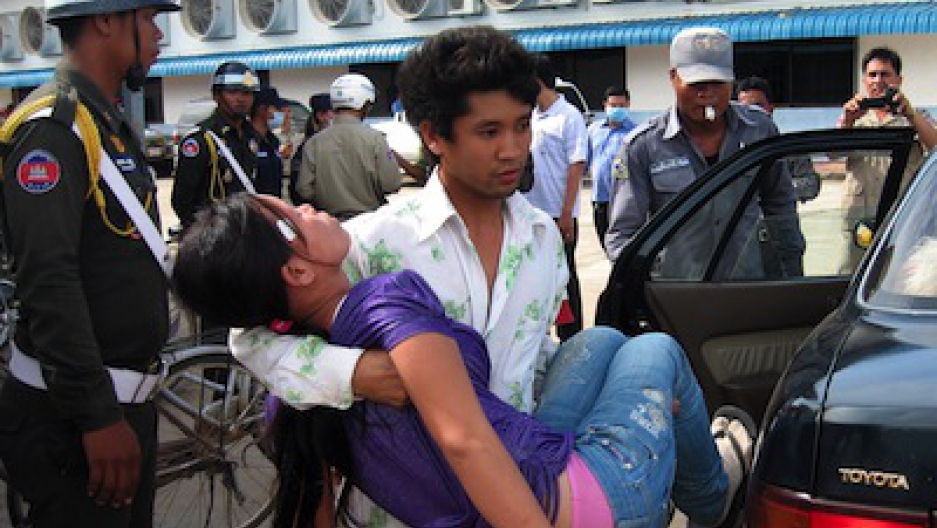 A Cambodian man carries an unconscious woman from a factory in Phnom Penh on October 12, 2009. Cambodia's garment industry is the impoverished nation's largest source of income, providing 80 percent of its foreign exchange earnings and employing an estimated 350,000 people.
Credit: AFP
Share

BANGKOK — In Cambodia, poverty is endemic and its people, largely unskilled and deprived of quality education, will work for dirt-cheap wages.

In other words, it's an ideal location for outsourced garment factories.

Last year, a strange phenomenon -- wave after wave of mass faintings in garment factories -- briefly attracted the media's gaze towards the lives of Cambodians who stitch clothing for Western consumers. This trend was largely presented as a mystery. Time Magazine surmised that "mass hysteria" could be to blame. An executive blamed it on a "strange psychological phenomenon."

But less attention has been paid to recent efforts to understand the fainting spells. According to varied groups' research, it's largely owed to more obvious causes: underfed workers toiling in stifling hot factories.

According to the International Labor Organization: "There is no one cause for the factory fainting incidents. Contributing factors include poor worker nutrition, excessive overtime, high heat levels, poor ventilation, and mass psychogenic illness."

Another outfit, the Netherlands-based Clean Clothes Campaign, also attributes the faintings to noxious chemicals, low blood sugar, malnutrition and, yes, "mass hysteria" among other factors. In 2011, the group reports, there were an astounding 2,400 fainting incidences.

Worse yet, though the faintings don't often attract attention beyond regional media, they're still ongoing. A China Daily report suggests that, in August, another 50-person mass fainting occurred, in part, because workers paired their already-grueling factory schedules with work in the rice fields.

Cambodia's emerging garment industry, which accounts for $2.6 billion in yearly exports to the U.S., is a sorely needed source of jobs. Stitching pants in a hot factory beats pulling rice stalks in a hot field.

But, according to the ILO, Cambodia's factories have made "little significant improvement" in fixing the varied triggers that can cause 100-plus workers to keel over by their sewing machines.