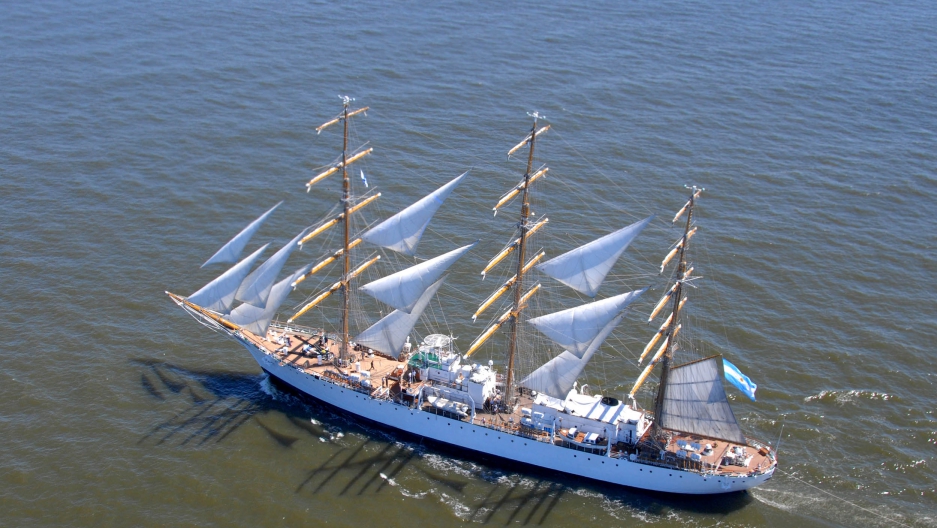 The Argentinian sailing ship ARA Libertad was seized by an American hedge fund as compensation for a bond the government failed to pay in 2001.
Credit: Ricardo Figueredo
Share

The above ship is the ARA Libertad, a training ship owned by the Argentine navy.

And now it's been seized. By a hedge fund. While it was docked in Ghana.

Why? Because Argentina is in a long legal battle with the hedge fund Elliott Capital Management, which has been trying for years and years to get Argentina to pay a 2001 bond it owes in full. Because it's recently won a court judgment saying that Argentina owes it money, it was able to get an injunction from the government of Ghana saying it's entitled to pay the ship.

The hedge fund, run by the US billionaire Paul Singer, has been closely monitoring the course of the Libertad, according to sources familiar with the firm.

Elliott had been waiting for the ship to stop in a port where it would have a chance to enforce legal judgments previously awarded by UK and US courts. The hedge fund declined to comment.

The whole thing is quite dramatic.

There were apparently 200 navy members on board the ship, according to Argentine news outlet Clarin.com.

According to reports, Argentina will be able to get this ship back if it pays an unspecified amount in bond (basically bailing it out).

Here's the full statement from the Argentine government, via Rolf`s Griechenland Blog:

The vulture funds have crossed a new limit in their attacks on the Argentine Republic.  The Frigate Libertad has been held in the Republic of Ghana over a recourse presented by NML Group before the courts of that country.  The Argentine Foreign Ministry has already taken steps with the African nation’s government to clear up the deception that the unscrupulous financiers have mounted.  That measure is in violation of the Vienna Convention on diplomatic immunity.

The vulture fund NML has its headquarters in the Cayman Island, a fiscal lair that it’s worth recalling is a colony of Great Britain, from which those who don’t submit themselves to the laws of any jurisdiction operate and they’ve been denounced both by the G-20 and the United Nations.

The NML Group belongs to international speculator Paul Singer and he is the main financier of the lobby that operates in the courts and the Congress of the United States with the name “ATFA” (Task Force Argentina) to damage our country.  Also, they disseminate false information for the use of some Argentine monopolistic press media, with the goal of extorting Argentina in order to obtain usurious profits from buying Argentine bonds for pennies during the 2001 crisis and refusing to join the 93% of the investors that agreed to the debt restructuring.

That group of lobbyists are the same that tried to harass the President during her recent trip to the United States passing out aggressive fliers against the presidential investiture.  Another of its actions was to place a gigantic rat in the doorway of the Argentine embassy in Washington when the anniversary of our independence was being celebrated.

The Foreign Ministry reiterates that it is the decision of President Cristina Fernández de Kirchner to not bow before the international and local attempts at extortion that have been brought forth by the vulture funds and will continue to denounce them in various forums such as the G-20, the United Nations, CELAC, UNASUR and MERCOSUR, FATF and the other multilateral organizations.

This really seems like the ultimate 21st century finance story.