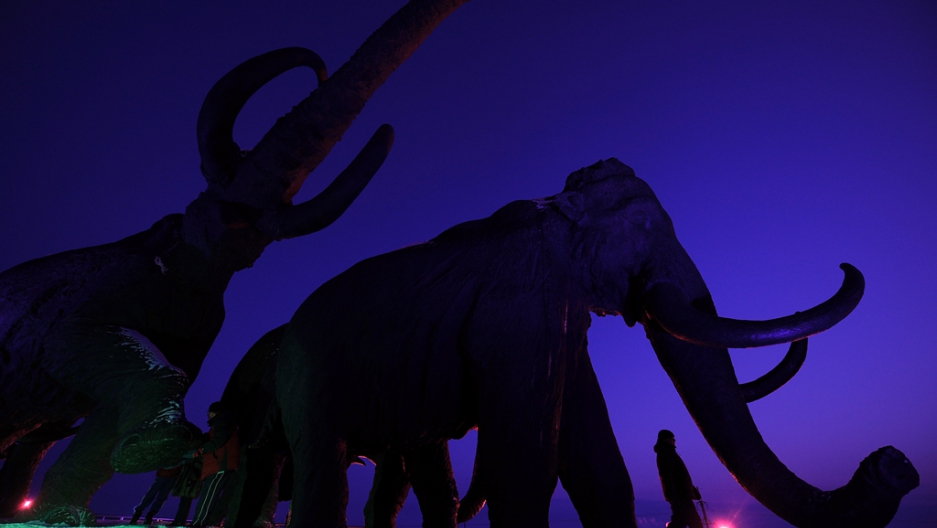 A person walks past giant bronze sculptures of mammoths on March 7, 2011 during the World Biathlon Championships in the Siberian city of Khanty-Mansiysk.
Credit: Natalia Kolesnikova
Share

For a long-extinct Ice age species, mammoths have been making a lot of news lately—and the remarkable, hairy finds simply keep on coming.

An 11-year-old Russian boy has reportedly stumbled upon the 30,000 year old carcass of one of the colossal beasts on the Tamir Peninsula, in a serendipitous scientific discovery. The carcass is already considered one of the most impressive finds in the history of Ice Age paleontology. You can see photos here, at NewScientist.com.

The boy, who hails from the Krasnoyarsk region of Russia, apparently stumbled upon the carcass and told his parents, who quickly alerted scientists, reports the Moscow Times.

The half-ton mammoth has retained some of its organs, and there are also scraps of flesh and fur, which scientists will doubtless find immensely useful for research purposes.

The mammoth carcass is reportedly the best-preserved such find since 1901, when the famous Beresovka Mammoth was found by a local deer hunter in a more southerly portion of the Krasnoyarsk region.

The Beresovka specimen was actually stuffed and is preserved in St Petersburg - you can see a photo here. No word yet on whether the new mammoth find will be displayed to the public in the near future.

The remarkably well preserved corpse may also give new hope to those hoping to clone a fresh, new wooly mammoth or two from preserved DNA.

In September, Russian scientists found a frozen mammoth specimen in Russia's Yakutia region, on the Arctic coast—although it appears that that specimen is not as intact as the newest find.

It's not entirely clear how long wooly mammoths survived or what exactly killed them off, although some estimate that the last died out around 4,000 years ago, likely in Siberia and on certain Siberian islands.