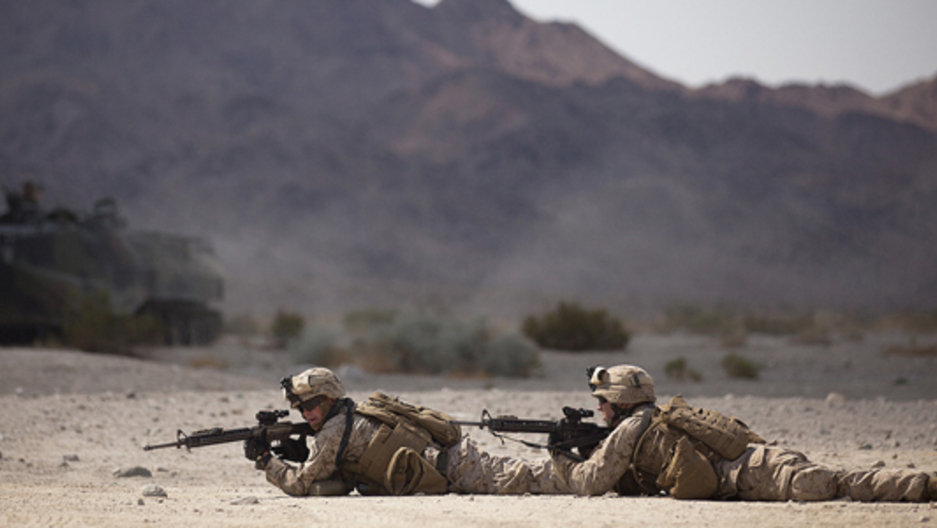 Share
At least half a dozen Syrian rebel fighters regularly gather at a hotel in Antakya to trade notes, and at least a few barbs. Nearly each table has a laptop, as they show off the latest footage of their fighting units, or Kateibas. Mohammed Zatar is commander of the Al-Rab Wolfs brigade in Hama. He showed off the video of his unit's exploits to Jameel, a well-known Syrian activist in Antakya. Jameel nods and explains to me that this is clearly a 'real Kateiba.' "Sometimes, 15-20 percent just release a video about establishing a kateiba but they are not real; they are not active," Jameel said. Jameel, who asked not to use his full name to protect his relatives inside Syria, runs a project trying to categorize and verify the various rebel fighting units in Syria. To-date, he said that more then 800 kateibas have cropped up. But he's dubious about many of them. "The general idea of the Kateiba is that it must be more than 100 people. The difference between real and not real, is that half are actually fighting on the ground and the other half are just collecting weapons or they're fake altogether," Jameel said. Over the past six months, videos posted online have shown everything from units posing with plastic replica guns, to a one-man kateiba asking for Saudi cash to defend his textile factory. But even the units that are fighting can be something of a joke. Alex is an ex-marine who served two tours of duty in Iraq. He asked not to use his real name to protect his identity, since he's been helping the rebels. He laughed and said, "there's no order, there's no structure" to the rebel units. He knows people think he's a spy. But he said he simply felt solidarity with the rebel's cause, and figured they could use his expertise. "I figure its like a women on the side of the road who doesn't know how to change her tire. She's got a flat tire and car full of children. If I know how to change a tire. Why not help?" Alex asked. Within the first few days, he realized that the level of violence in Syria was greater then anything he had seen in Iraq. "I saw more in five days then I saw in my whole time, all my tours in Iraq," he said. He described scenes of massive civilian casualties, and destroyed cities. While he couldn't do anything to stop the regime. He said he could offer basic training to the Syrian rebel units. "We would drive around to different battalion units and I would give them classes on the basic maneuvers and things like that." He said that most units, even if they were involved in the fighting had never gotten even the most rudimentary military training. So he helped. "I would break things down for them," he said. "'This is a good sniper position, this is how you move from A to Z. This is how you keep a clean house. Don't fight in your sandals.' You know what I mean?" Alex said he saw rampant jealousy and infighting between the units, including those who were meant to be fighting in the same area. There are serious issues about how the Syrian rebel units are structured. He described driving out of Aleppo one night trying to convince the head of a well-funded Kateiba to transfer some weapons to a unit fighting inside the city of Aleppo in desperate need of guns. "We are in the middle of the desert," he said, "and we drive and its all farm and there is a villa with a big wall — this is like a movie like in Scarface — they are all sitting around in their tracksuits and like comfortable outside of this city and this guy was not going to budge." The incident showed him the lack of cooperation and unity on the Syrian rebel front, and it left him wondering whether they're going to make it. For now, Alex is planning his next trip back in to help.