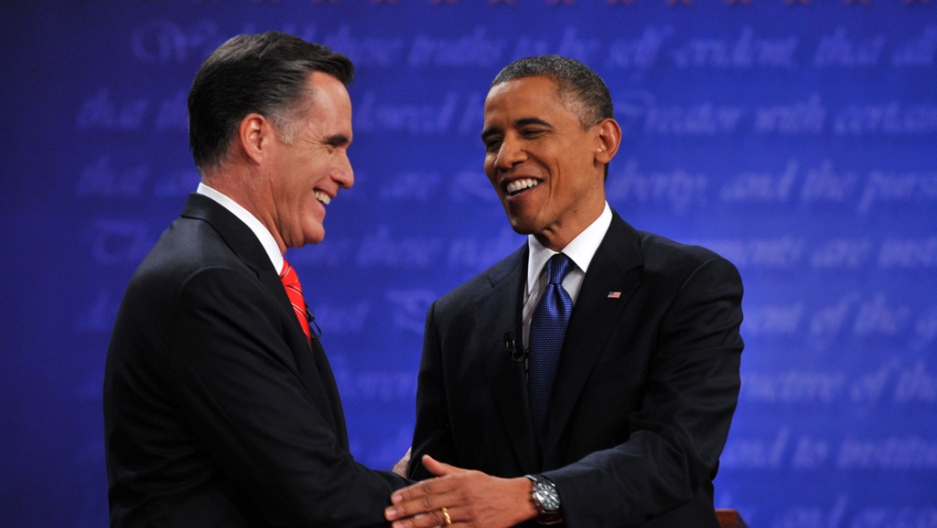 What most viewers saw during the 90-minute battle between President Barack Obama and former Massachusetts Gov. Mitt Romney Wednesday night in Denver was an incumbent intent on educating the electorate on the specifics of his programs, and a challenger determined to engage the same audience by telling them exactly what they wanted to hear.

Guess who came out on top.

The debate was supposed to be devoted to domestic policy, with a strict format giving each candidate equal time.

But moderator Jim Lehrer seemed to lose control very quickly into the process; both men droned on far beyond their allotted time, while Lehrer tried ineffectually to steer them back to the topic at hand.

“It looks like we have a backup NFL official moderating,” said one viewer at a debate watch party in Iowa City.

Both Obama and Romney were heavy on figures, while at the same time managing to be light on specifics. There were few concrete plans presented, just a spreadsheet of pluses and minuses, interpreted to suit each candidate’s position.

Romney was at pains to seem empathetic and “human,” trying to shed the robotic image that has dogged him throughout the campaign. He repeatedly emphasized how much he cared about the middle class, how he would not raise their taxes, he would create jobs and make life better for those who were struggling. But his comments failed to convince a group of mainly liberal professionals in Iowa City.

“Romney doesn’t care about the middle class,” said Merrill Anderson, a leadership coach in Johnston, Iowa. “What he said had no relation whatsoever to what he believes or what he has said in the past.”

Others were less polite. Cries of “You lie!” and various profanities echoed through the room, while grown-ups in their fifties and sixties threw popcorn at the television set.

But despite their liberal leanings, most of the dozen or so people present were disappointed in Obama’s performance, thinking he should have challenged Romney more on his statements.

“I think Romney did himself a lot of good tonight,” said another viewer, who specializes in brain research. “He did it by not telling the truth, but even so ….”

Romney denied that he wanted to privatize Social Security and transform Medicare into a voucher program, positions he has voiced widely in the past. This seemed to leave Obama a bit befuddled, as if he did not quite know where to strike.

“Obama came in thinking Romney was going to be honest about his positions,” said Anderson. “He should have just said, ‘You know, governor, they called you the Etch A Sketch candidate, and they were right.’ But Obama tried to focus more on the issues.”

Romney adviser Eric Fehrnstrom started a firestorm last March when he suggested that the campaign could just erase its previous positions once the primary season ended and the campaign proper began.

“I think you hit a reset button,” he said. “It’s almost like an Etch A Sketch. You can kind of shake it up and we start all over again.”

Romney came into the debate as the underdog. His campaign has been stumbling lately, and he had been trailing in most polls.

Over the past few days, though, some surveys have shown the race tightening up, and the Twitterati were predicting a reset of the campaign itself following tonight’s performance.

The Romney camp’s response was busy rounding up headlines from around the country: “Big, big win for Romney,” “Changed the trajectory of This Race,” and “Rose to the Challenge” were some of the offerings they rebroadcast.

The mainstream pundits were no less negative on the president’s performance.

In fact, Romney did not win the debate so much as Obama lost it.

“I think maybe next time go with half a Xanax, Mr. President,” was one particularly snarky tweet.

Obama was strangely passive, failing to press Romney on some of his weakest points. The president did not mention the “47 percent” video released last month, in which Romney had dismissed almost half the population as irresponsible moochers content to live on government handouts. Many had looked forward to seeing Romney squirm a bit on that issue.

The president also allowed the Massachusetts governor to get away with denigrating Obama’s clean energy bill, while states like Iowa are deeply invested in wind power.

The debate was such a snooze for so many of the viewers that the line that will doubtless be remembered the longest had little to do with policy.

“I’m going to stop the subsidy to PBS,” Romney told Lehrer, who works for the public broadcaster. “I like PBS. I love Big Bird. I actually like you too. But I’m not going to … keep on spending money on things, to borrow money from China to pay for it.”

The remark generated more tweets than any other single issue, and a “Save Big Bird” campaign cannot be far behind.

The fact checkers will be busy for days, comparing and contrasting the various positions the two candidates took in the course of the 90-minute debate.

But chances are the public will not wait for the facts before making their decision on who won and who lost. As history has shown, from Richard Nixon’s disastrous faceoff with John Kennedy in 1960 to Ronald Reagan’s aw-shucks takedown of Jimmy Carter in 1980, debates are more about form than substance.

“By tomorrow the facts will not matter,” said Anderson.

“Mitt Romney connected better with the viewers, giving them what they wanted to hear, regardless of his previous comments or positions,” Anderson added, and went on to compare the Republican candidate to Michael Douglas’ cutthroat character in the “Wall Street” films. “But do we really want to put Gordon Gekko in charge of the free world?”