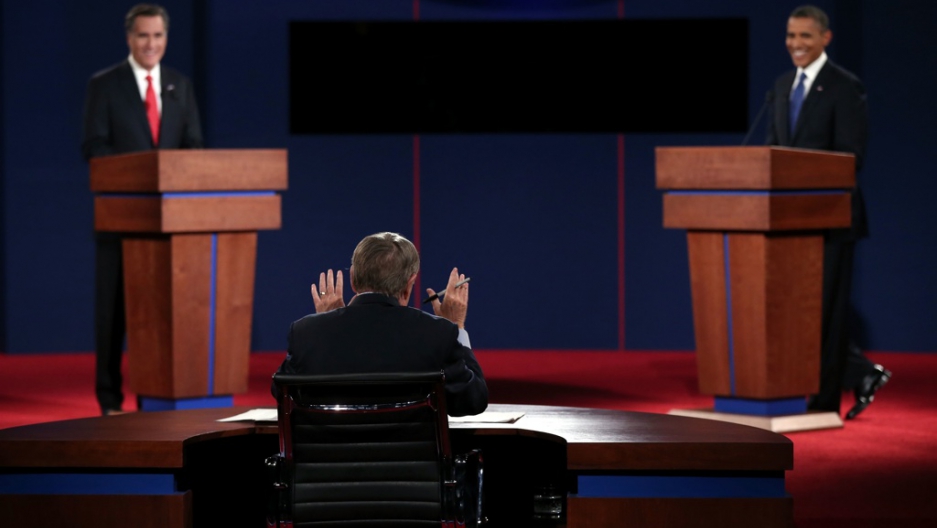 Viewers blasted Jim Lehrer for a weak performance at the Denver presidential debate. On the contrary, he was arguably surprisingly effective.
Credit: Win McNamee
Share

BOSTON — “It looks like we have a backup NFL official moderating,” said one Iowa City viewer within earshot of GlobalPost's Jean MacKenzie.

Jim Lehrer has been roundly and almost unanimously panned for his performance during last night's debate.

From the get-go, Lehrer lost control of the discussion. He allowed the candidates to violate time limits, dismiss his questions and ignore the debate format.

The New York Times' Allesandra Stanley wrote that Lehrer "presided over [the debate] with courtesy, fairness and absolutely no flair for enlivening the discussion." She suggested that Lehrer's performance was the best case for eliminating PBS subsidies, as Romney promised to do.

But was Lehrer's performace really all that bad?

Think about the usual, anodyne and highly structured debate format, in which candidates outline their platforms in rigidly enforced time segments, followed by a single follow-up rebuttal. The result tends to be frustrating and predictable, a laundry list of prepared statements revealing little that we can't learn from their websites.

Last night, Lehrer may have appeared tired and weak. Journalists can have huge egos, and a presidential debate is normally a prime opportunity for highly paid, blow-dried anchors to push around the world's most powerful leaders. In that narrow sense, Lehrer missed an opportunity.

But the PBS NewsHour anchor is no rookie (disclosure: the NewsHour is a syndication partner of GlobalPost). This was his 12th presidential debate. Whether or not he had intended to let the debate turn into a rugby match, the outcome was unusually revealing.

In journalism, when you're eager to get sources to reveal their true character, often the best approach is to let them talk without interruption. That's what Lehrer did.

As a result, the nation witnessed a real debate — and a surprisingly unvarnished display of political character.

Obama demonstrated that he can get stuck in the fine print, unable to prioritize and apparently unwilling or incapable of forcefully defending himself and his party. Although the president spoke longer than his rival, his words often rambled and rang hollow. He mainly droned on about details without delivering memorable lines. He made the same mistake critics have pointed to throughout his tenure: thinking that politics is a gentleman's game, in which strong logic and altruistic intentions prevail.

Under Lehrer's freewheeling oversight, Obama confirmed (unintentionally) that he continues to suffer from Obsessive Bipartisan Disorder. Why didn't he once lash out at the Republicans who have blocked his efforts to create jobs, who have insisted on tax cuts for the super-rich, even as the middle class is being gutted and the nation sinks deeper into debt? Why didn't he tar Romney with the failures of the George W. Bush administration — the unpopular wars, the financial crisis? When Obama mentioned Bush's disastrous 2001 and 2003 tax cuts, he did so without even naming the former president. No one could blame the debate format — or Lehrer — for tying his hands.

Romney quickly seized the advantage, defining Obama's platform for him, as many Republicans since Reagan have so effectively done. And Obama accommodated the challenger, assuming the fetal position just as he had during the health care debate, and as Democrats so often do when under attack ("death panels" meet $716 billion in supposed Medicare cuts). Romney's assaults were met with either silence, or worse, rambling details.

We all know by now that Obama is likeable and that he can be a powerful orator. He came to office under the toughest of circumstances, with the nation on the precipice of economic ruin, and he effectively thwarted the worst of that. But let's face it, last night's performance was a microcosm of what we've come to expect over the past four years: a presidential listlessness that has allowed critical debates to devolve into a muddle, adding to the national malaise.

In short, Obama reminded the nation that he is smart, professorial and well-meaning, but uncertain and tentative as a leader, even after almost four years in office.

Romney, on the other hand, came across as a Gordon Gekko figure: slick, confident, methodical and hyper-prepared, ready to say whatever his audience wanted to hear in order to close the deal, regardless of the facts. He inoculated himself against claims he was distorting the truth — or deploying Etch A Sketch revisionism (as his campaign advisor let slip) — by repeatedly questioning the president's honesty, a line of attack that might play well in key swing states.

The Republican challenger exuded private-sector efficiency. He spoke in Bain board room-ready bullet points, and had zingers ready on his tongue tip. He scored punches on Obama's access to a house and plane as president, even when Romney's own exorbitant wealth is a major vulnerability. He swore, convincingly, that he was concerned about the middle class and the jobless, despite privately disdaining 47 percent of Americans as moochers.

He used numbers to his advantage, and he repeated them, drilling them into the public memory. This morning, Americans know that Democrats made up 87 percent of the legislature in Massachusetts when he was elected, for example. They learned (incorrectly) that Obama doubled the deficit. Most effectively, Romney allowed Obama to drone on, perhaps aware that his best offense was allowing the country to watch the president squirm.

The nation saw Romney as someone who may not represent its broadest interests, but who can handle himself under pressure, who can go on the offensive when needed, who can appear presidential.

No doubt, the debate was frustrating, even cringeworthy. Viewers' eyes glazed under the reams of studies and the tangle of statistics, which will be quickly forgotten. And while the nation failed to learn much about what the candidates stand for, thanks to Jim Lehrer's approach, we got an unusually revealing look at who these two men are, and how they would lead the country.

Once the election is over, after all, there is no moderator to make politics nice.