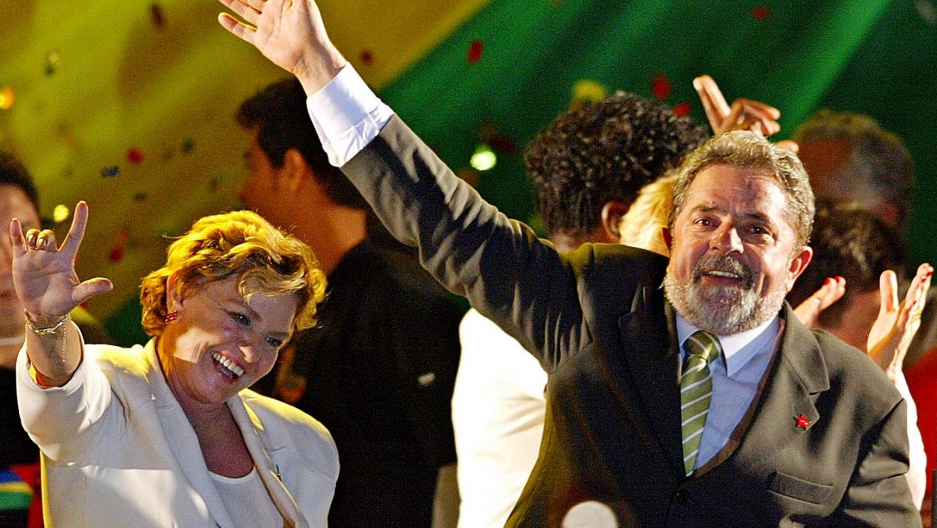 RIO DE JANEIRO, Brazil — In an ad for the re-election campaign of Venezuelan President Hugo Chavez, a kind-faced man introduces himself and weeps as he tells his story. His mother died when he was 8, leaving him on the streets. Then he was lifted from poverty and now lives in a house he calls “paradise,” since the president has been at Venezuela’s helm.

“First my God, then my comandante!” he says.

On the opposing side, candidate Henrique Capriles has donned a blue-and-yellow baseball cap with the pattern of the Venezuelan flag. The Chavez government accused him of breaking election laws that prohibit using national symbols for campaigning. The government lash-out only made the banned hats more popular among street vendors and a symbol to supporters.

Both candidates have campaigned heavily around Venezuela in the lead-up to the oil-rich South American country’s Oct. 7 presidential election. And campaign details like those, insiders say, are touches that show who is behind each candidate — a team of top-notch Brazilian marketeers.

More from GlobalPost: What Venezuela's vote means for Washington and LatAm allies

Political consultants in Brazil are known for their creativity, world-class advertising, emotional appeals, and attention to detail.

At home they became a sensation with quirks like the red Worker’s Party baseball cap and “My name’s Joao” TV ad that helped Brazil’s former President Luiz Inacio Lula da Silva get elected in 2002.

Lula had lost his first three bids for president, but a smart team of campaign advisers helped soften his image, transforming him from radical unionist to a sweet paternal figure.

Now, after Lula put Brazil on the map as a rising global powerhouse, the advisers who helped him win have become coveted names in the world’s elections business.

Joao Santana is a PR master with Brazil’s ruling Worker’s Party who has advised both Lula and his successor, President Dilma Rousseff.

This year he has been working for the Chavez camp, with the task of softening the Venezuelan strongman’s aggressive image, ahead of an election in which a large swath of voters is undecided. But that’s not all.

Earlier this year, Santana split his time between Venezuela and Angola (which, like Brazil, is a former Portuguese colony), where he served as a consultant for the Aug. 31 presidential election there.

On Capriles’ side, Brazilian election newcomers Renato Pereira and Francisco “Chico” Mendez, from a sleek public relations agency called PROLE, have worked to distance the opposition candidate from the most rightist elements of the Venezuelan constituency.

Their cool advertising for the Rio de Janeiro state governor (“Putting together all our forces”) cast an image of a hardworking state government that wanted to revitalize the state.

PROLE is also behind the “Olympic City” marketing campaign, promoting the idea that Rio, which will host the 2016 Olympics, is becoming a more just and prosperous city for all as it grows to fill the demands of the games.

“Brazil is exporting political consultants,” said Israel Navarro, the Latin America editor for Campaigns and Elections magazine, which is based in the US.

Navarro said US advisers traditionally dominated Latin America’s consulting arena. One is Ralph Murphy, who lives in Ecuador and has worked on campaigns there, in Argentina and Venezuela, before Brazilians became a force.

“They deliver results. They do make a difference in campaigns. ... If you compare Brazilian campaigns to other campaigns in Latin America they have a very high level of production and creativity involved.”

Brazilians have become ubiquitous in Latin American elections over the past two decades and have recently started entering Africa, said Carlos Manhanelli, the president of the Brazilian Association of Political Consultants. He has advised eight African elections, often in former Portuguese colonies like Mozambique, Cape Verde and Sao Tome and Principe.

Peruvian President Ollanta Humala, once seen as too close to Chavez, softened his image with the help of Brazilian Workers’ Party consultants Luis Favre and Vladimir Garreta. Duda Mendonça, a marketeer credited with softening da Silva’s image, has worked in mayoral elections in Argentina and Portugal. His colleague, Santana, has advised winning presidential candidates Mauricio Funes in El Salvador and Danilo Medina in the Dominican Republic.

More from GlobalPost: Today's Latin American strongmen cling to power at the polls

In Angola, Africa’s second-largest oil producer, Santana clinched the role of campaign adviser to President Jose Eduardo dos Santos — after a line of Brazilian consultants reportedly attempted to woo him. Widely criticized for cracking down on dissent and for leading a corrupt, unequal oil-rich nation in which the masses still live in poverty, dos Santos is Africa’s second-longest serving leader after 33 years in power.

“The change of the image of Brazil from the [2002-2010] Lula government — whether or not you like Lula you agree Brazil improved its image in the world — helped to open up new markets” for political advisers, said Justino Pereira, himself a political consultant in Sao Paulo and the editor of the Portuguese-language Campaigns and Terms.

“The new marketeers either worked with Lula or other candidates close to him, like Sergio Cabral [the governor of Rio de Janeiro],” he added. “They got a ride on this new Brazil that Lula opened to the world.”

“You have to use all your creativity for each election to fit what the law demands. This creativity leads to an eminence,” said Manhanelli, who identified the baseball cap strategy of Capriles as being a Brazilian touch to the campaign. “Given that our culture is very similar, it is difficult for an American consultant to come to do a campaign here” in Latin America, he said.

Navarro added that one such cultural element is making a strong emotional appeal to voters. That’s what Chavez’s propaganda focusing on individual stories has done.

“That is totally emotional, and that is another element in Brazilian consulting,” Navarro said. “They know how to work that emotional link between the candidate and voter.”