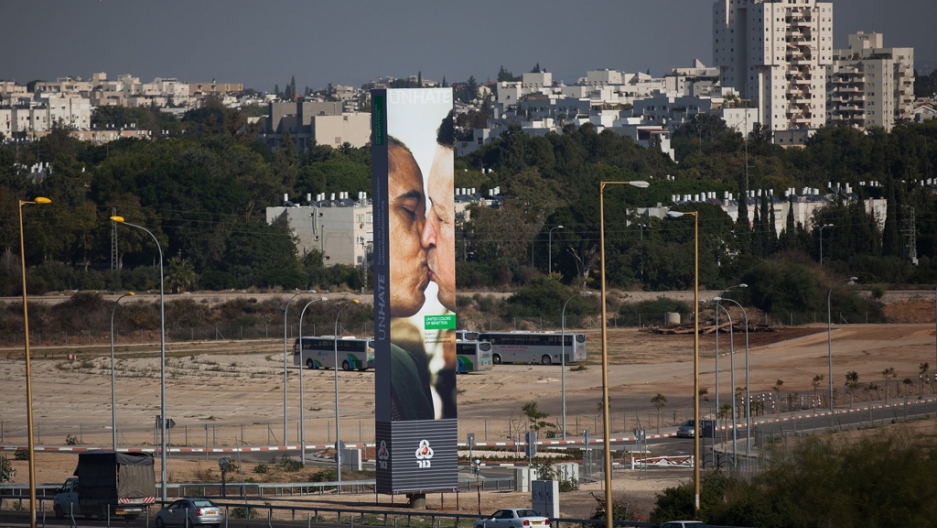 Kiss of death? A Benetton billboard with a composite image of US President Barack Obama and Venezuelan President Hugo Chavez kissing. Both are running for re-election this season, and Chavez has endorsed Obama.
Credit: Uriel Sinai
Share

CARACAS, Venezuela — “I hope this doesn’t hurt Obama,” Venezuelan President Hugo Chavez said on state television over the weekend, acknowledging that with elections coming up in the US, his words could be jumped upon by the Republicans. “But if I was from the US, I'd vote for him.”

Those words may haunt the US president in the coming days, though Chavez’s foreknowledge of this is more interesting than the throwaway rhetoric.

Chavez is a populist of rock-star proportions, floating with his ideology atop the world’s largest oil reserves, and it is ultimately that oil wealth that’s made him such an important global power.

Facing his toughest elections yet on Sunday, Oct. 7, Chavez may well be on his way out after 13 years at the helm of all that oil. But even if he does win, as opinion polls have predicted, is Chavez still as relevant as he believes in a Latin America that's moving on and to a US government that is far from the policies of former presidents Nixon, Reagan and Bush?

More from GlobalPost: Today's Latin strongmen cling to power at the ballot box

“The South American leaders pay lip service to Chavez as one of their own but behind closed doors they’re either laughing or crying,” said Riordan Roett, director of Latin American Studies Program at John Hopkins University in Washington, DC.

An example of this is President Ollanta Humala in Peru. He initially ran for election (and lost) in 2006, clad in a red shirt and spouting anti-capitalist rhetoric, happy to show off his friendship with Chavez.

When he ran again in April last year (and won), he did so dressed in a sharp shirt and tie, refusing to admit any kinship with Venezuela’s fiery socialist president or any of Latin America’s left-leaning leaders. Despite a rocky first year as president, Humala’s policies are more moderate and his language more encompassing.

Colombia’s President Manuel Santos has both laughed and cried, accusing Chavez of trying to have him killed just two years ago, before describing him as his “best friend” a year later.

Colombia’s left-wing FARC rebels have been a pawn in that game as accusations are rife that the Chavez government has supported the left-wing group, to the disdain of successive Colombian leaders. But Chavez has now come out in support of a peace process between the government and guerrillas.

“Now that the peace talks have begun, Chavez has one less card to play,” Roett added. “Public opinion has turned against the FARC. There is real chance for negotiated peace.”

More from GlobalPost: Why the US should support Colombia peace talks

Chavez’s opponent in Sunday’s vote is Henrique Capriles Radonski. It is a tight race, demonstrated by the hundreds of thousands who have marched alongside each candidate in rallies over the last few months.

Capriles describes himself as “100 percent Lula,” referring to Brazil’s former President Luis Inacio Lula da Silva. One of Latin America’s most popular leaders, Lula is credited with turning Brazil into the world’s de facto leading emerging market while also maintaining social programs that lifted many out of poverty.

It is the more moderate Latin America that many of Capriles’ supporters want to see here.

Chavez does have ideological allies across Latin America, from the Castros in Cuba to Presidents Rafael Correa in Ecuador, Evo Morales in Bolivia and Cristina Fernandez de Kirchner in Argentina, whose government is increasingly following Venezuela’s trail, both in domestic and foreign policy.

“If Capriles wins he will be eager to jettison the us versus them mentality that has marked Chavez's rule,” said Michael Shifter, president of the Inter-American Dialogue, a Washington think tank. “This may not mean matching the current coziness in Venezuela's relations with Argentina, Ecuador and Bolivia, but it will mean an effort to keep relations on a good track, enjoying trade and diplomatic ties.”

While those ties will no doubt continue, it is Cuba that is likely to suffer most from a Chavez loss. The Venezuelan president sees former President Fidel Castro as his mentor. Cuba’s Vice President Carlos Lage declared in 2005 that his country had “two presidents, Fidel and Chavez.”

Venezuela provides Cuba with between $5 billion and $15 billion annually — nearly a quarter of the communist island's $63 billion gross domestic product — in return for human capital such as doctors and sports coaches. The free oil shipped to the island would come to a halt should Capriles come to power.

“With severe problems in terms of poverty and infrastructure, oil gifts that represent about 3 percent of our GDP are not acceptable,” Capriles said. “These gifts disguise the buyout of geopolitical favors to an ideological agenda as international development support.”

A loss for Chavez has the potential to plunge Cuba back to the so-called Special Period following the collapse of the Soviet Union, when the island suffered a chronic economic crisis as Havana was no longer able to offset the US embargo. The economy contracted 35 percent between 1989 and 1993, and oil imports decreased nearly 90 percent in that same period. The Cuban people suffered food shortages, some losing up to a quarter of their body weight.

However, Havana is this time somewhat more prepared, especially as President Raul Castro has begun to open up the economy slightly. Oil investment from China and other projects show that the government there is willing to diversify, as are many across the region.

Washington’s relationship with Caracas has been a tough on ever since Chavez came to power in 1999, though it has peaked and troughed. The trough took place in 2006 when Chavez called then US President George W. Bush the “devil” as he stood at the United Nations lectern. Today, the relationship is at a slight peak given Chavez’s seeming olive branch to Obama over the weekend.

But olive branches and rhetoric do nothing to cloud the fundamental issue. “The US and Venezuela are in a deadlock,” said Roett. “He needs our money. We need his oil ... All the anti-imperialist rhetoric means nothing. Chavez has no other guaranteed source of income. Unfortunately the US needs his oil.”

The loss of the loudest voice in Latin America against Washington could improve relations in the entire region. “The tone of US-Latin America relations would be decidedly less strident and confrontational,” said Shifter. “This is not to say that relations would suddenly become harmonious, far from it. But for the last 14 years Chavez's voice has been the loudest and most disruptive, and he has aggressively sought adherents to his cause. Without him in power, the temperature would presumably drop.”