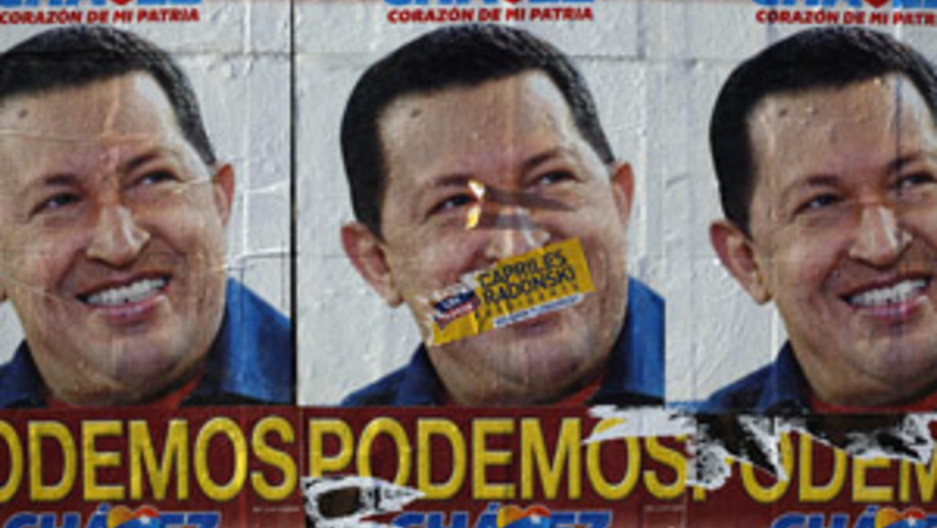 Share
Venezuelan President Hugo Chavez will attempt to win another six-year term when he faces off against opposition leader Henrique Capriles in Sunday's presidential election. Both candidates are making their final arguments in TV ads and in stump speeches. They are even taking their campaigns into neighboring Colombia, in search of every last vote. In the Colombian border city of Cucuta, there are about 10,000 Venezuelans who are eligible to vote in Sunday's election. Some were born in Venezuela, but many are Colombians who secured Venezuelan citizenship from the Chavez's socialist government. Chavez made it easier for foreigners to gain Venezuelan citizenship, making them eligible for government programs like free universities, cheap bank loans and even pensions. In return, Chavez expects these newly minted Venezuelans to vote for him. The bridge here that connects Colombia with Venezuela closes on election day, so the Chavez campaign plans to bus voters across the border the night before. They'll receive free lodging and meals plus a ride back to Colombia after they vote. That's a lot of effort to cast a ballot. But Humberto Rangel, who works for the Chavez campaign, says that proves that voters are highly motivated to keep the Venezuelan leader in power. "People seek help from this revolutionary and socialist government. That's why many people on the Colombian side of the border come to Venezuela. They want to re-elect Comandante Chavez," he said. A good example is Leticia Chaustre, who's come to a Chavez campaign office in Cucuta seeking a bus ride so she can vote. She's Colombian, but her two sons were born in Venezuela, which made her eligible for Venezuelan citizenship. She says dual citizenship makes it easier to travel to Venezuela to visit family members and bring cheap goods back into Colombia. Opposition candidate Henrique Capriles is also courting supporters in Colombia. Near the border bridge, I meet Jonathan Rangel, who works for the Capriles campaign. He claims many cross-border voters fled Venezuela because they couldn't stomach Chavez's authoritarian rule. "These voters truly love their country. They truly want a change," he said. "They live outside of Venezuela, but they want to come back." But Capriles' efforts pale in comparison to Chavez's massive get-out-the-vote machine. Venezuela holds some of the world's largest oil reserves, and the Chavez government has funneled much of the wealth into health, education, and housing programs. Besides reducing poverty, these programs have boosted the president's popularity. As Sunday's election approaches, the government is flaunting its largesse. Just across the bridge in the Venezuelan town of Urena, I met Mayor Nelson Becerra, who showed me a caravan of 50 new SUVs that the government is delivering to poor communities along the border. But the government is also using more ominous ways to maintain the upper hand. Nearly every government office, including the electoral council, is stacked with Chavez allies. His government has harassed critical journalists and forced scores of opposition radio stations off the air. It also controls most TV stations, and Chavez is now using them to savage Capriles In a speech broadcast Monday on state TV, Chavez accused Capriles of looking overseas for campaign donations from money launderers, mafia kingpins and drug traffickers. Yet Capriles is turning out to be the biggest challenge to Chavez since he was first elected in 1998. Most polls give Chavez the edge. But the opposition contends that many Capriles supporters are afraid to tell pollsters how they really intend to vote. Lucy Araque, who covers politics for the Cucuta newspaper La Opinion, says that after Miami, Cucuta is home to the second largest population of Venezuelan ex-patriots – and in a tight race their votes could be crucial.