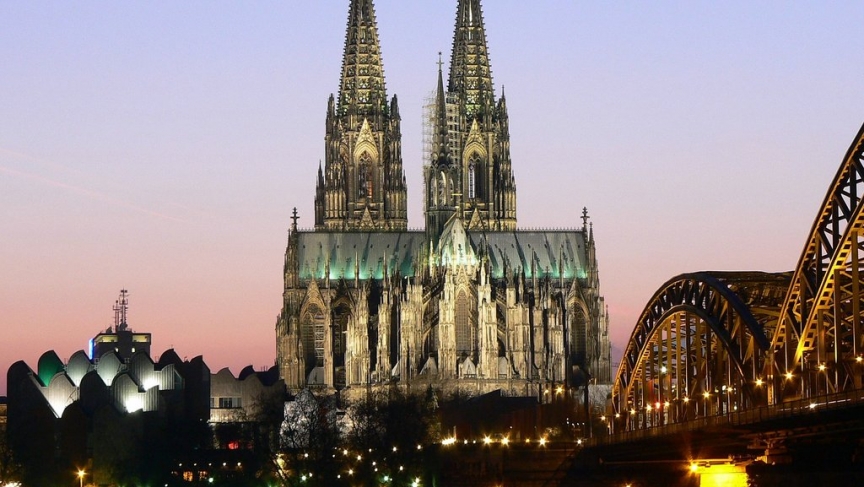 Share
The outcry in Germany continues over religious taxes. The tax is levied on anyone officially affiliated with a Christian church or the Jewish faith. It's about eight percent of what you pay in yearly income tax. In recent years more and more Catholics have been refusing to pay it. But last week Germany's Catholic Bishops said no more. You don't pay, you don't receive communion and other religious services. A German court has just found in favor of the church. In the town of Dachau, some 20 minutes outside Munich, there's an old, well-tended Catholic graveyard on a hill. If you want to be buried here, with a priest presiding and praying for your soul — and you haven't paid your church tax — forget it. Same goes for having your kids baptized, for receiving communion. In short, you gotta pay to pray, according to a decree issued last week by Germany's catholic bishops. You're not excommunicated, you stay a member of the Catholic community. But you lose certain rights, said Gilinde Koebl-Stecher. She's an official at the Catholic Diocese in downtown Munich, one of the country's largest. "The meaning of the church that solidarity is shown if you pay your church tax. And in the law it is written that the member of the church is obliged to pay a contribution," Koeble-Stecher said. Germany's church tax was set up to compensate religious institutions after most of their lands were confiscated in 1803. But a growing number of Church activists are taking issue with the tax. Among them, Christian Weisner, a resident of Dachau. He's with a group called We Are Church. He said church membership is based on faith, not on a financial contract. "I think in Germany we have a special situation in that you can only be a Catholic when you are paying church tax. But that is theologically wrong," Weisner said. "If a person is baptized once, he is catholic and he or she will be a Catholic all life long." Germany's Catholic church has been losing more than a hundred thousand members a year, every year, for a couple of decades now. This, as parishioners get turned off by sex abuse scandals and the church's conservative positions on issues like abortion and women priests. Weisner said Church leaders should focus their energy on soul-searching, not on sending threatening missives to people who refuse to pay the tax. "I think the bishops should ask why are you leaving, and what can we do for you? But now they are sending that letter, that said you can't be a godfather and godmother anymore, you can't have a church wedding. And I think this is a threatening message to people," he said. But threatening may just be what the church is after. Because among the multitudes abandoning the church, some are simply protesting the tax, yet still attending mass, going to confession and so on. It's a tax dodge, church officials say, and it ends up hurting society's poorest. On one of Munich's busiest squares, stands a small wood-sided mobile home called the Island. It's a rapid response center for people in crisis, paid for by the church-tax. Social worker Wolfgang Tutsch said counselors receive about eight thousand people a year, helping them through marriage and money problems, what have you. "We want to be very near to the people and their problems," he said. "So, to reduce the borders. They just should be on the way and say, I feel totally bad, and there's a door I can go in and there is a little island to find a little bit of help." But good works aside, some members of the church itself say the latest plan to withhold sacraments from tax objectors could backfire. Pater Korbinian, a Benedictine Monk whose parish is just down the road. The monks there run a soup kitchen for the homeless. The project doesn't use money from the church tax. The Benedictines have a brewery. Beer sales keep this place open. Korbinian said he thinks the new tax enforcement policy is going to drive even more people from the church. He said he likes Italy's system, and Spain's, where everyone pays a much smaller annual tax. But you get to choose where the money goes: to the church, or to some other social cause. "And I think it would be much fairer. You know, the church in Germany is really rich. Our archdiocese has more employees than the holy see. I think much more than a thousand work directly for the diocese," Korbinian said. Over at the Diocese, Koebl-Stecher confirmed that the church's finances are sound. "I think we are not struggling. We are doing well," she said. But she insisted the church is not lining its pockets with the religious tax, but using it to pay for its churches and programs. But activist Christian Weisner of We Are Church, said his group isn't giving up. They're taking their demands to Rome next week to mark the 50th anniversary of the last major Roman Catholic reform: Vatican 2.