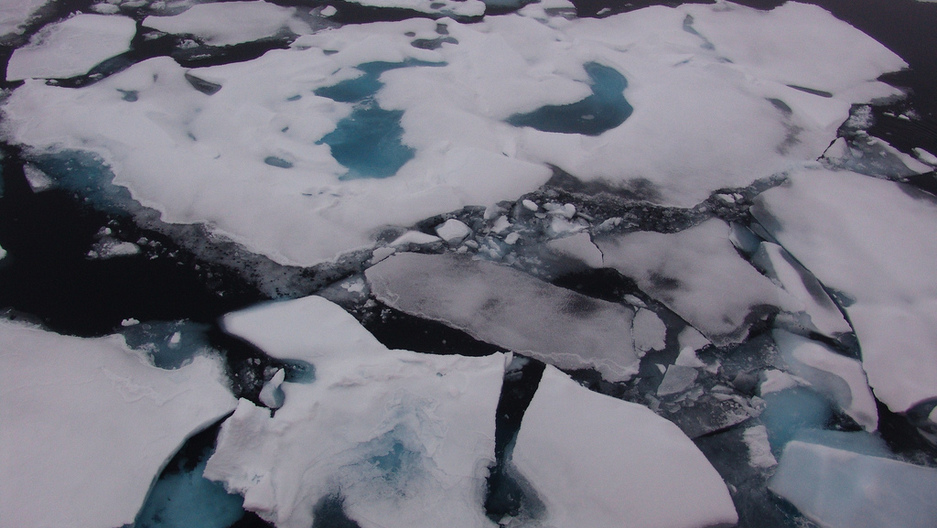 Ice in the Arctic region is melting swiftly, just one of many signs of climate change. (Photo courtesy of NOAA.)

The economy seems to be the central issue of this year’s presidential contest, but a new study from the Yale Project on Climate Change Communication suggests that global warming could be a hotter topic than anticipated.

In the study, The Yale Project on Climate Change Communication found a broad majority of undecided likely voters — as well as Obama-leaning voters — view climate change as real and want Washington to do more to address it. Geoffrey Feinberg, a co-author of the study, said the researchers decided to pursue these questions because they were interested in how climate change could shift the election.

The study is based on results from 700 likely voters, some seven percent of whom were undecided.

In general, Feinberg said the undecided voters they spoked to resembled supporters of Barack Obama, more than anything else.

And over half of the undecideds, Feinberg said, indicated that a presidential candidate's position on climate change would influence their decision on who to support.

"Not many say that global warming is the key issue for them, only about one in 20. However, over half, about six in ten, say that it is among the important issues that will help them decide their vote," he said.

And the majority of those voters believe that global warming was caused by human activity, the poll found. Just 20 percent believe it was naturally caused, Feinberg said.

"There is, in fact, a virtual consensus among climate scientists that global warming is happening and there have been a number of academic papers which document this," he said. "And two in three Obama voters understand that. Relatively few Romney voters, 22 percent, believe that there is a consensus and in fact the majority of Romney voters, over half, 57 percent, think there's a lot of confusion and debate among scientists as to whether or not global warming is happening."

A little less than half of the undecideds believe most scientists think global warming is happening and about the same amount, about 42 percent, think there's a lot of disagreement, the poll found.

With undecideds generally believing climate change will be a factor in choosing a president, and the lion's share believing global warming is happening, Feinberg urged both leading candidates to consider carefully how they address the topic.

"I think Mr. Obama might do well to reiterate that he believes global warming is happening, that it's not a hoax, he believes it's human-caused and that we need to find solutions to solve the problem," he said. "Mr. Romney is in a tougher spot because a number of his base either doesn't believe it's happening or doesn't think it's human-caused so I suppose if I were Mr. Romney what I would say is that: look, this is something that needs to be taken very seriously, it's something that Democrats and Republicans need to work on carefully together to ensure that the science is good, to ensure that solutions are good, and that if in fact it is happening, that we need a free market approach to solve the problem."

So far, though, neither candidate is rushing to wrap his candidacy in the flag of fighting global warming.