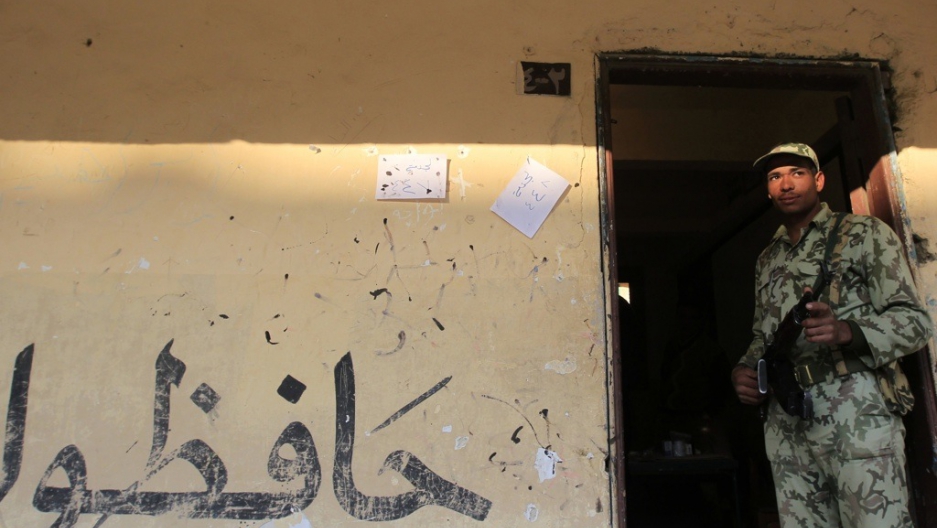 The Egyptian military is finding itself outgunned and outmanned against militants in Sinai, near the border with Israel. Here, an Egyptian soldier in Cairo.
Credit: Mahmud Hams
Share

AL MUQATTA, Egypt — It was just before dawn on Sept. 16 when Mahmoud heard the unmistakable roar of a helicopter gunship.

From his roof, he watched as the Egyptian army launched a full-scale assault on a cluster of reed homes nearby. He then watched with surprise as the extremists fought back with exceptional firepower.

The fighters, reportedly from the Sinai-based Al Salafiya Al Jihadiya Movement (Salafi Jihadi Movement), chased the army’s armored convoy out of the area using anti-aircraft guns mounted on Toyota 4x4s, according to Mahmoud and other locals.

The army has yet to return.

Egyptian troops are outmanned and outgunned by a formidable consortium of extremists, armed with heavy weapons and artillery from Libya and Sudan, in the restive and mountainous Sinai Peninsula.

The army’s operation to stunt the militants’ growth in the peninsula’s volatile north — following an attack that killed 16 Egyptian soldiers in August — has made few tangible gains. Instead, the extremist groups appear emboldened.

“The army cannot fight us for two reasons,” Abdel Rahman, a member of the Salafi Jihadi Movement in North Sinai, told GlobalPost. His group, like at least six others in Sinai, wants to impose Sharia law and fight Israel.

“One, our [Islamic] ideology is spreading and you cannot seek out and destroy ideology,” he said. “Two, the spread of arms means you cannot distinguish a jihadi from a normal citizen. There are weapons everywhere.”

North Sinai has long been a conduit for weapons headed to the Gaza Strip and many native Bedouin residents, of which there are about 170,000, have armed themselves against an Egyptian state they see as oppressive and discriminatory.

After security forces were routed from the rebellious Sinai during Egypt’s uprising last year, extremists from across the country, as well as the Gaza Strip, exploited the security vacuum to accumulate weapons and strength.

Both arms smugglers and an Egyptian intelligence official, speaking to GlobalPost on condition of anonymity, said at least 1,000 Sinai-based fighters possess everything from automatic weapons to armor-piercing anti-tank missiles and shoulder-fired anti-aircraft guns — culled from the looted arsenals of Muammar Gaddafi’s Libya.

Many of these weapons have been used in attacks against Israel or Egyptian security forces.

“They [the militants] are not better equipped than the army, but they are equipped well enough to provide effective resistance,” the Egyptian intelligence official told GlobalPost.

During the raid Mahmoud witnessed on Sept. 16, he said fighters used a Soviet-made 14.5 mm-caliber machine gun to strike an army Apache helicopter, forcing it to retreat. The army later confirmed the hit.

“The terrain is also difficult,” the official said. North Sinai’s geography is a combination of high desert mountains and settled coastal plains. “And the army is unable to use its full capabilities.”

Under the terms of a 1979 peace treaty between Egypt and Israel, the Egyptian army must limit its armaments and troop movements in the Sinai Peninsula, which borders Israel. Egypt was forced to withdraw a number of tanks from Sinai’s demilitarized zone along the border earlier this month, after Israel reportedly protested the move.

Egypt now has about 2,200 troops stationed in the demilitarized buffer zone to combat the rising militant tide, according to the Associated Press. But only a handful of arrests have been made and just six militants have been killed in sporadic and disjointed raids, locals say.

“They need to stop carrying out raids and arresting the wrong people,” said Sheikh Abdul Qader, who lives less than a mile from where the Sept. 16 attack took place. “The army is using old information from the interior ministry.”

More from GlobalPost: Tahrir Square gets a makeover

Egypt’s vast and repressive security apparatus has collected intelligence on criminal networks of Bedouin smugglers and traffickers in Sinai.

But while some Bedouin have cooperated with the extremists and joined their ranks, most of the militants are coming from the Nile Delta and the Hamas-run Gaza Strip. And they have brought with them new networks and tactics that sometimes operate outside the traditional criminal infrastructure in Sinai.

Several of the six militants killed in a separate raid on the Al Jora area of North Sinai on Aug. 12 were from Cairo and other cities in the Nile Delta.

Those targeted in the Sept. 16 raid “were strange, we didn’t know who they were,” said Abdul Qader, himself a Bedouin native of the area. “They would keep their compound closed, and told anyone who drove by to take another route.”

The army is getting little help from the Bedouin locals, a community whose members had been treated like second-class citizens for years.

Abdel Qader said the army would only win when they gain the hearts and minds of the local population.

“We want an army that understands its role. He is a citizen, I am a citizen and between us is the law,” he said. “Then we will help them.”