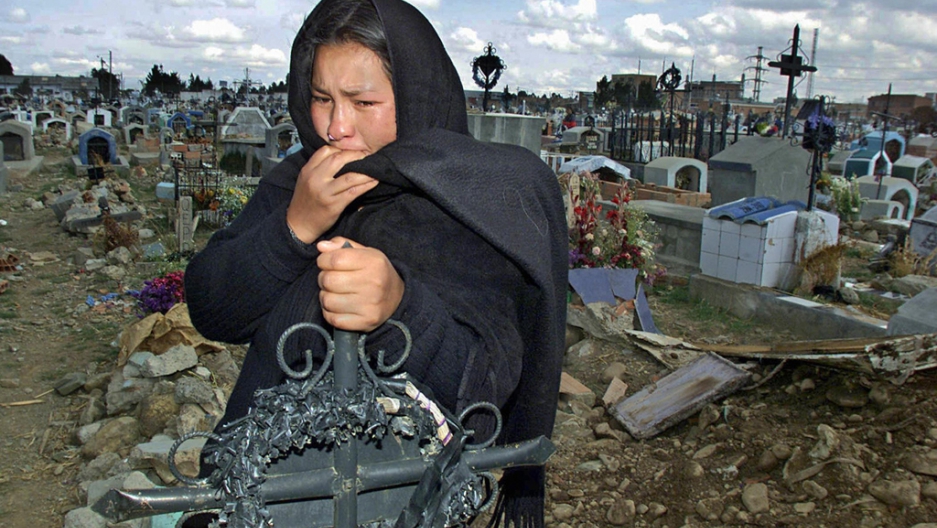 This Bolivian woman lost her husband and son when protesters clashed with anti-riot forces in October 2003, when the so-called "gas war" left almost 80 dead people and about 500 injured. Bolivian President Evo Morales demands that the US extradite the man he believes is responsible, former President Gonzalo Sanchez de Lozada.
Credit: Aizar Raldes
Share

Sanchez de Lozada is wanted in his homeland over the slaying in October 2003 — 15 months into his second presidential term — of dozens of protesters against his plans to export Bolivia’s oil and gas reserves.

The Bolivian police and army’s handling of the unrest was widely criticized at the time by human rights groups, including Amnesty International, which issued a statement warning of the authorities’ “excessive use of force.”

But now Evo Morales, Bolivia’s current president, is claiming that Washington has told him that it is rejecting his government’s request to have Sanchez de Lozada extradited to be put on trial in La Paz for human rights abuses.

Morales, an ally of Venezuelan President Hugo Chavez, said he had received a letter from the US government justifying the decision on the grounds that “civil society cannot be held responsible for the actions of the military.”

In typically pointed comments, Morales, who has repeatedly clashed with the US on a range of issues including trade policy and the widespread cultivation in Bolivia of coca, the key ingredient in cocaine, added that the US had become “a refuge for criminals and a paradise of impunity.”

In a written statement sent to GlobalPost, the US State Department said its policy is not to comment on specific extradition requests.

However, it went on to insist that the US is open to “dialogue” with La Paz about “legal assistance, including extradition cases.” It also expressed its “condolences” to the victims of the 2003 violence.

Beyond Morales’ stated reasons for the US’ rejection of the extradition request, there are also concerns about the impartiality of Bolivia’s courts.

Since taking office in 2006, Morales, who was one of the principal leaders of the 2003 protests, has overseen sweeping reforms of the country’s justice system and critics claim he now controls much of the judiciary.

More from GlobalPost: Evo Morales goes back to his roots

As a result — and despite inaccurate reporting by English-language media that there’s “political consensus” in Bolivia behind Sanchez de Lozada’s extradition — even some critics of the police and army brutality have been warning that the former president would not receive a fair trial.

Senate minority leader Centa Rek Lopez, of the conservative Plan Progress for Bolivia-National Convergence alliance, told GlobalPost: “We believe there needs to be a thorough investigation of the events of October 2003, of the actions of all the parties, including the protest leaders, including Evo Morales.

“There was a social commotion, led by Morales, and violence and the overthrow of an elected government. During that process, yes, the government responded excessively. But in the current circumstances, with a politically driven legal process, we believe it is a humanitarian gesture on the part of the US authorities to allow the ex-president asylum.

“The courts now obey the executive in a way never before seen in Bolivia, even during the days of dictatorship.”

Carlos Marin, a Bolivia specialist at Amnesty International, declined to comment directly on the US’s apparent decision not to extradite Sanchez de Lozada.

However, he added: “There are legitimate concerns about whether a trial would have been fair. If there were a trial, Amnesty would want to have observers there.”

During the October 2003 protests, police and army units used live rounds to kill between 67 and 80 people and injure another 400, according to a report by the Inter-American Commission on Human Rights based in Washington, DC.

The deaths followed months of growing unrest over the economic “shock treatment” which Sanchez de Lozada, a millionaire mining executive, was overseeing.

The package of measures, recommended by US economist Jeffrey Sachs, is credited with having controlled Bolivia’s hyper-inflation. But it was highly controversial, plunging millions into even deeper poverty. One law even attempted to privatize the country’s entire water sources, including all rivers, streams and lakes.

And that February, there had been violent clashes with the police when an international consortium, Aguas de Tunari, attempted to hike water rates for its impoverished customers by 300 percent. A 17-year-old boy was killed and the government was forced to expel the consortium from Bolivia.

Coming from a president who was widely seen as more American than Bolivian, Sanchez de Lozada was quickly running out of time.

Trained in the US, he spoke Spanish with a US accent and his 2002 campaign had been planned by Democratic strategists Greenberg Carville Shrum, whose partners include James Carville, Bill Clinton’s former campaign chief.

By October, most Bolivians were fed up. As word spread of supposed government plans to export Bolivia’s huge oil and gas reserves — when many citizens themselves had no electricity — Morales, a firebrand coca growers union leader, led a fresh wave of nationwide protests, including a blockade of roads into La Paz.

After several days, the capital was running dangerously low on food, fuel and other necessities, and Sanchez de Lozada sent the army to clear the way for gas and diesel trucks.

Yet as the convoy passed through it was attacked by rioters, some allegedly armed with guns, and clashes with security forces caused dozens of deaths.

As Morales then upped the pressure, launching more protests across the country, Sanchez de Lozada resigned to avoid more bloodshed and fled to the United States.