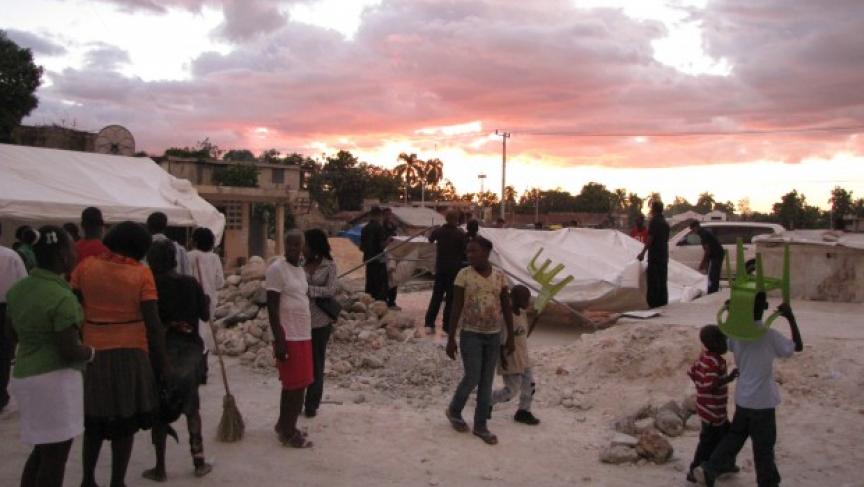 Léogane was one of the first towns I saw in Haiti when I moved here in 2003. It was my second day, and I carpooled with members of the Haitian Journalists Association to the dusty little town an hour from Port-au-Prince to attend a protest outside a church.

The priest had expelled a reporter during a Mass because he had criticized the president, and the HJA’s mission was to show they stood together and they wouldn’t be cowed.

We stood atop the front steps and outside the massive closed doors of the church waiting for the priest to appear. Being so new to Haiti, everything was confusing, and while somewhat frightened by the counter-demonstration forming on the street below, even more intimidating to me was this solid, grand, church that loomed over us and the town’s main square, even when a relatively small priest emerged in an ‘I (heart) Jesus’ baseball cap, said a few words, and disappeared.

For the next nine years, I never returned to Léogane. I often passed it on the road heading southwest of the capital but never took the turnoff – even after the town was devastated by the January 2010 earthquake. But during my last trip a few weeks ago, I drove there with some friends to check out the celebration of the day of the town’s patron saint, Rose de Lima – also the name of the church.

We arrived as the sun was setting and asked where the ‘fete champetre’ (country festival) was, imagining dancing through the streets.

It was explained to us that the party was another day, but the day was solely a dawn-to-dusk service at the church.

One of the friends with me was Makenson Remy, a radio journalist whom I had met at that HJA event nine years ago. The service was to be held at the same church, the only Catholic church in town, right on the main square.

Yet somehow, in spite of repeatedly getting directions, we could not find the place. We rolled up and down the uneven streets, following finger points and wrist waves toward what seemed like nothing, until we finally realized that what we were looking for didn’t really exist any more.

What everyone referred to simply as ‘the church’ was nothing but a tile floor – now functioning as a parking lot, an altar, and, on the ground behind it, a large church bell. The town square before it was lined with a tall, corrugated metal fence, and around it stood once stately buildings in various states of destruction.

The service was being held in tents, some marked ‘UN’, and when it came to an end, scores of beautifully dressed men, women and children picked up their chairs and cleared out, breezing past the repaired church bell, which sat awkwardly on the ground, and the altar, looking unjustly neglected with its gilded mosaic designs, as Sri Lankan peacekeepers leapt into action, disassembling and folding up the tents.

Clearly what I was reading used ‘église’ (church) to mean ‘paroisse’ (parish). Still, a parish in Haiti that existed in the 1500s, long before independence and the abolition of slavery?

Haiti’s founding father, Jean-Jacques Dessalines, was married at this altar in 1801, but going back even further, what is now Leogane, it turns out, was once the capital of a Taino chiefdom that covered most of what is now Haiti. At the time this church was built, Spanish missionaries were wreaking havoc on what was then Hispaniola, spreading smallpox while trying to convert Tainos to Catholicism. A few years after the parish was created, the Spanish began bringing enslaved Africans to the island.

It seemed a sad story of the triumph of the wicked, that the people who killed off the native population and enslaved the ancestors of modern-day Haitians created a parish that serves as a hub for the community even when its infrastructure is gone.

But maybe it’s about something modern and positive emerging from an inevitably painful past. Several years ago, a priest decided that the church saint’s day should be separated from the accompanying street parties, so those were moved to a later date.   I hear they’re a lot of fun and very Haitian – that is, so independent of infrastructure as to survive disease, conversion, slavery, and a massive earthquake.