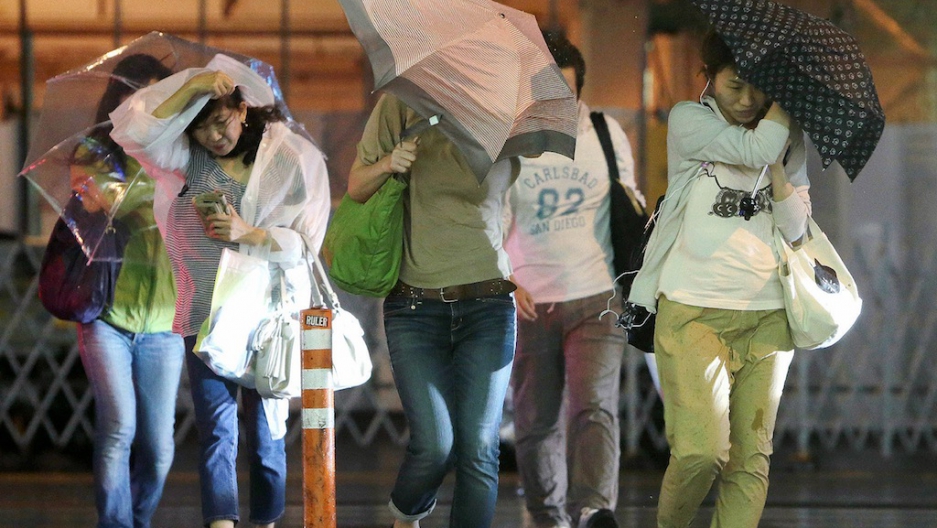 People cross a road a they try to hold on to their umbrellas under heavy winds and rain brought on by Typhoon Jelawat in front of a railway station in Tokyo on September 30, 2012.
Credit: JIJI PRESS
Share

One of many typhoons to hit the region in recent weeks, Jelawat is a "very strong" storm with maximum sustained winds near the center of just over 100 mph (165 km/h), the Agency said, according to CNN. A NASA advisory said it was comparable to a category 3 hurricane.

"The winds are screaming through the streets," storm chaser James Reynolds told CNN from Okinawa before the typhoon strike. "I've seen at least one window blow out."

Nagoya city, in central Japan, issued an evacuation advisory to more than 50,000 residents because of fear of flooding from a swollen river, said the Associated Press. More than 10,000 people were also evacuated in the northern coastal city of Ishinomaki, which was also hit by last year's tsunami.

According to the AP, dozens of trains were stopped in coastal areas around Tokyo and stores inside the capital closed early Sunday as the storm got closer. Jelawat was expected to hit northern Japan and move into the Pacific Ocean early Monday.