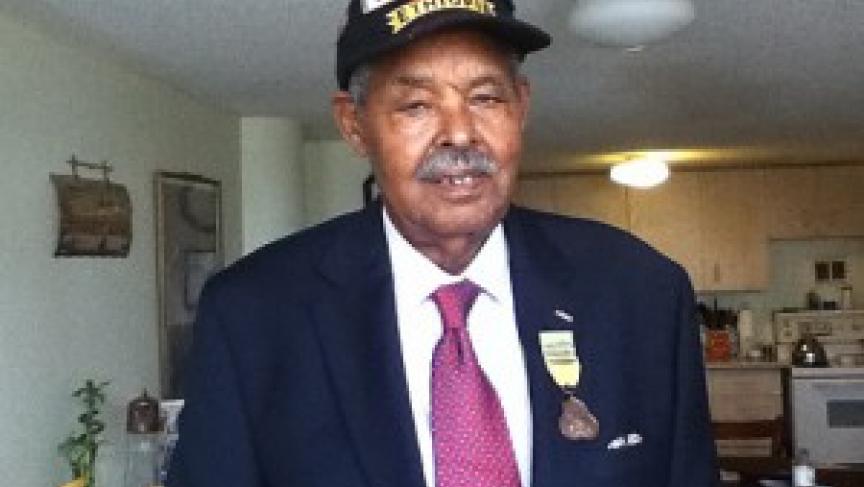 Mamo Habtewold served with distinction for Ethiopia during the Korean War. (Photo courtesy of the BBC.)

Now 81, 60 years ago Mamo was a young officer in the Imperial Guard of Ethiopia. That was when Emperor Haile Selassie answered a call from the United Nations to send troops to Korea to fight the Communists.

Mamo vividly remembers seeing the Emperor as they were sent off.

“He was giving each battalion a flag, and he ordered us to bring that flag back. And all the Battalions did. Very successfully," he recalled.

Mamo’s unit was attached to the U.S. Army’s Seventh Division. At the time, the American army had just been desegregated. But Mamo says racism was not an issue for the Ethiopian soldiers.

“We Ethiopians are proud and boasting that we were Ethiopians. We don’t care any color. The Americans didn’t call us ‘Negro,’” he said.

The Ethiopian solders soon won a reputation as tough fighters, earning the respect of their American allies.

“We are the best fighters. The three Ethiopian battalions fought 253 battles, and no prisoner was captured from Ethiopia in the Korean War," Habtewold said. "That’s an Ethiopian motto — never be captured in the war field.”

That motto led to a severe personal test for Mamo. By 1953, the Korean War had degenerated into a bitter trench war. Mamo was stationed at a place named Pork Chop Hill.

One night in May he led a patrol into no-man’s land.

He had no idea that coming the other way was a full-scale Chinese assault.

“We were 14 Ethiopians and one American, 15 in all,” Mamo said. “Four are killed, including the American corporal, and all of us are wounded.”

Wounded and trapped in no-man’s land, Mamo fought on — desperately searching for a working radio to call in artillery support.

He gave his pistol to another Ethiopian to cover him while he searched.

He was worried he would pass out.

“That time I was afraid I might be captured, I wanted to kill myself," Mamo said. "But when I ordered the soldier to give me my pistol back, he refused me.”

Dreading the thought of being captured and dishonoring the flag of the emperor, Mamo hunted for another weapon among the dead.

Then the Chinese attacked again, and Mamo continued fighting. Eventually he found a radio, and called in the American artillery.

That stopped the Chinese offensive in its tracks. And it won the young Ethiopian the American Silver Star, for gallantry.

He was the only man left standing.

"I was depressed very much," he admitted.

Mamo said it was like a man who loses his whole family and returns to an empty house. Ethiopia lost 121 men in the Korean War; more than 500 were wounded.

After the war, the Ethiopians — living and dead — returned home to a hero’s welcome. The practice of bringing the dead home from a foreign war was unusual at the time.

It was a custom that impressed Ethiopia’s American allies. And the US began doing the same thing ... in 1953.