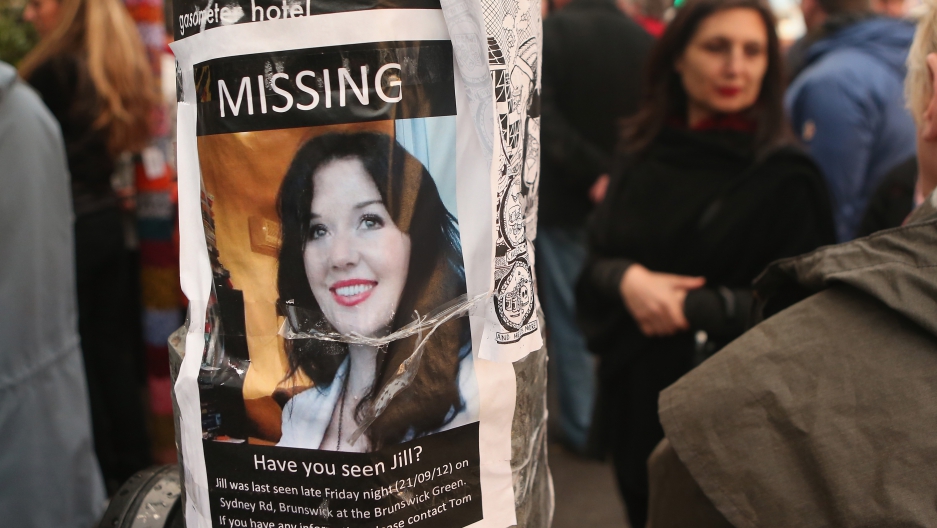 A missing poster for Jill Meagher, whose body was found by police buried in a shallow grave north-west of Melbourne, is taped to a lamppost on Sydney Rd on September 28, 2012 in Melbourne, Australia.
Credit: Scott Barbour
Share

Australians have turned out in their thousands in memory of Irish woman Jill Meagher, raped and killed last week near Melbourne.

The crowd walked through the Melbourne neighborhood of Brunswick, where Meagher, 29, was taken, carrying placards calling for peace, the Fairfax media reported.

Australia's ABC News put the crowd at 30,000, reflective of the public outpouring of emotion that followed Meagher's disappearance Sept. 22.

The body of Meagher, 29, who moved to Australia with her husband from Ireland three years ago, was found in a shallow grave in a country area 30 miles from the city last Friday.

Adrian Ernest Bayley, 41, a father of four with a troubled past, according to a profile in The Australian, has been charged with Meagher's rape and murder.

Meagher's mother has since visited the site where Meagher was last seen.

On Sunday, those marching in Jill Meagher's memory carried single white roses, photographs and placards calling for peace and an end to violence toward women.

The organizer of the march, Philip Werner, told the ABC that the large number of marchers indicated how strongly the community felt about Meagher's death.

"Once we got to Brunswick Road and looking back up the hill there's just this sea of people," he said.

"Something that I feel really strongly is that everyone is here of their own accord, and everyone is here for this message and to show solidarity. Everyone's here because they feel the same way."

On marcher, a father himself, told Sky News:

"I'm worried about my kids. They're young; they're growing up in this society. I send a message also to the authorities: 'Get tough on this. We've had enough of it'. She's lost her life over this and it shouldn't have happened."