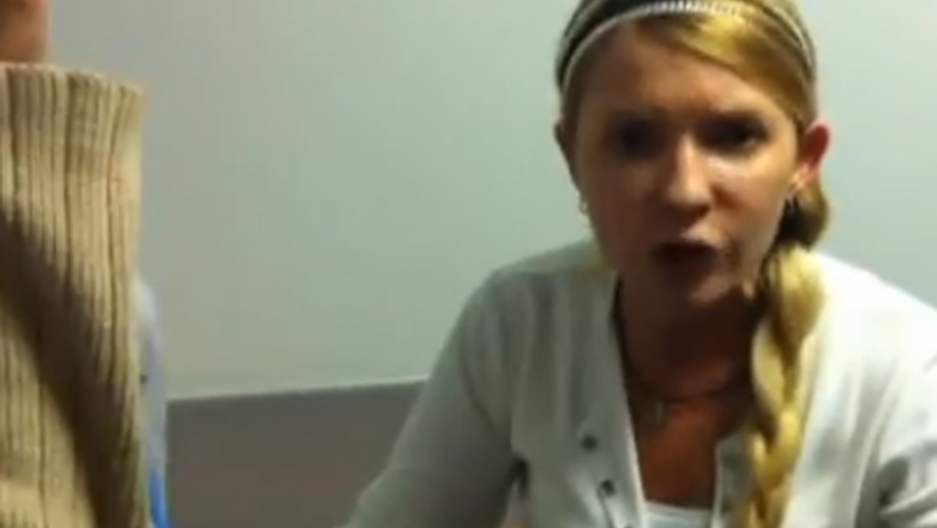 Jailed Ukrainian political leader Yulia Tymoshenko issued a video statement today that calls on voters to band together against that country’s “criminal gang” during the next election.
Share

Jailed Ukrainian political leader Yulia Tymoshenko issued a video statement today that calls on voters to band together against that country’s “criminal gang” during next month's elections.

Tymoshenko’s Batkivshchyna – or Fatherland – Party released the video on its website.

In the shaky, 2-minute 12-second video, a male prison guard or hospital official tries blocking the camera despite the audio running clearly.

A female official stands nearby and only shields her face from the camera.

Anyone who watches to video can hear Tymoshenko railing against President Viktor Yanukovich’s “mafia that rules Ukraine and ignores the rights of the people.”

“Today the whole country, sadly, is living under criminal authority,” Tymoshenko said, according to the Reuters translation. “The more they allow this and the further it goes, the more every person will feel this criminal rule weighing on his life … rise up at these elections and throw out this criminal gang.”

Tymoshenko, 51, filmed the video from a hospital where doctors are treating her debilitating back pain, Radio Free Europe reported.

She led the “Orange Revolution” against election fraud in 2004-05 and served as prime minister.

A court sentenced her last October to seven years in prison for corruption.

Many world leaders condemn the charge as politically motivated.

Yanukovich spoke at the United Nations General Assembly in New York this week, and said this year’s election would be open and fair.

He also cast doubt against a US Senate resolution calling for visa sanctions against Ukrainian officials, RFA said.

“Naturally, we should take such resolutions seriously,” Yanukovich said, according to RFA.

“But we are also aware of the opinions of the Department of State and the White House. They are slightly different.”