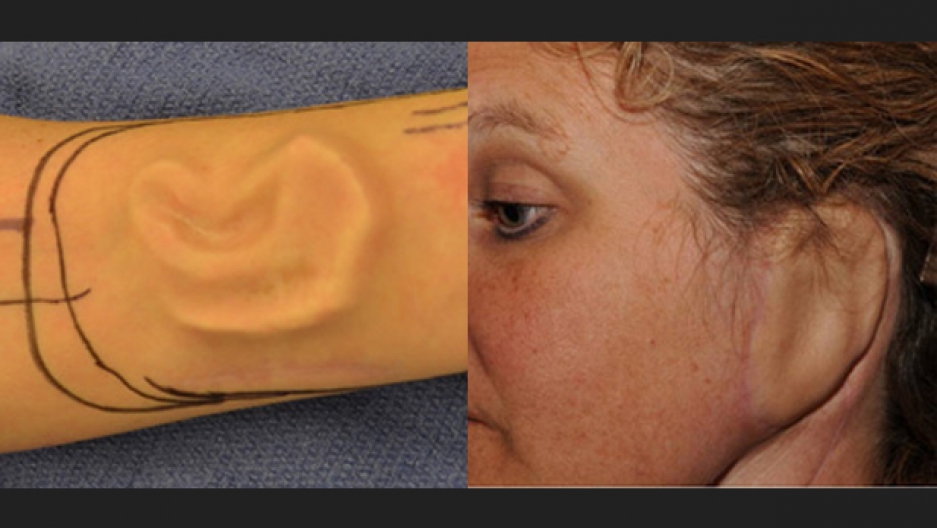 Doctors at Johns Hopkins have successfully grown an ear on a woman's arm.

Sherrie Walters', 42, ear was grown on her arm to replace one removed after developing bassal cell carcinoma in 2008.

The illness meant that she had her ear, a piece of her skull and her ear canal removed.

She is now the first person ever to have their ear regrown using cartilage taken from her rib, said Medical Daily.

The team of surgeons, led by Dr. Patrick Byrne, an associate professor in otolaryngology-head and neck surgery at the Johns Hopkins University School of Medicine, took rib cartilage to shape a new ear, according to Red Orbit.

In an experimental procedure, it was placed under the skin and let grow for four months before being transplanted into her head approximately six months ago.

"Sherrie's skull bone had been removed, so the only way of attaching a prosthetic would be through tape and glue. We both agreed that wasn't an option," said Byrne, according to ABC News.

The decision to place the ear under the skin on the forearm was an unprecedented procedure.

"We implanted the ear near the wrist and just let it live there so all the skin could grow."

Walters was diagnosed with cancer in 2010 and had her ear removed in 2012 when the cancer spread to her ear canal, said CBS News.