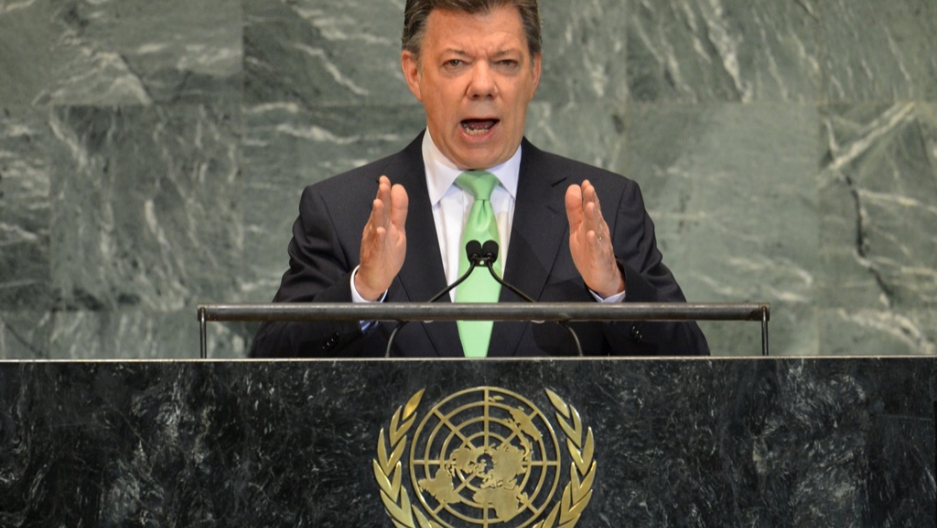 But the talks in Norway planned for October 8 with the Revolutionary Armed Forces of Colombia (FARC) insurgency, a group with deep ties to narco-trafficking, kidnapping and on the US terrorist watch list, are not without a high degree of political risk.

The United States, which has spent more than a decade supporting the Colombian Armed Forces in its mission to defeat the FARC may be understandably ambivalent about negotiating a peace agreement with the guerrilla group, and the ensuing legitimacy and eventual immunities an accord would provide.

Yet the most effective way to support its closest ally in the region is for the United States to define demonstrable support for President Santos’ efforts for peace.

Colombia’s current president has taken important steps to re-balance the state more firmly in the center than his predecessor, Alvaro Uribe. Failure at the negotiating table is likely to trigger an electoral reaction not unlike the one that swept Uribe to power as President Andres Pastrana’s efforts to negotiate at Caguan floundered.

This led to a decade of violence in the countryside as the Colombian armed forces redoubled their efforts, with significant US assistance, to reduce the FARC to half its former fighting strength, an effort that was accompanied by substantive human rights and humanitarian law violations, including thousands of extrajudicial killings by Colombian security forces and forced displacement of millions of Colombians.

Over the last decade, detractors in the region have sustained a critique of the United States as an imperialist hegemon reminiscent of the Cold War, facilitated by the US focus on providing support for fighting insurgencies and drug traffickers despite the human costs, and the policy priority given the free trade agreement.

More on Colombia: Washington is missing out on FARC peace talks

Two of those critics, Cuba and Venezuela, are brokering the peace talks.

So, from a US government perspective, why not wait and see if US critics can help the Colombian government reach an agreement with a deeply contradictory and arguably unreliable narco-insurgency?

First, because the United States needs to broaden its policy efforts in Colombia to reflect its democratic values of participation and concern for the millions of Afro-Colombians, displaced persons, indigenous people, rural peasants, trade unionists and women victims of sexual violence caught in the crossfire.

Second, the fact that the US is not directly involved in the current talks is an opportunity to articulate support based on its own vision and standards for a lasting peace. This means that the US will be able to define support for broad social inclusion aspects mentioned by President Obama without having to respond to demands, for example, for immunity from prosecution, by the FARC.

Third, failure to support Santos in his efforts to end the war may lead to further erosion of the capacity and legitimacy of the Colombian state.

Providing backing for a negotiated solution is an opportunity for the US to re-balance its foreign policy towards Colombia. President Obama’s only statement on the Colombian peace process to date identifies twin policy pillars of security and social inclusion.

US policy has been predominantly focused on drug interdiction, fighting insurgencies and free trade even though faced with the glaring negative social consequences that have accompanied its support through Plan Colombia.

Clear policy benefits, in fact, are available from visible support for an inclusive and sustainable peace process even in the event the talks do not succeed. These include:

1) Potential for even a preliminary agreement to reduce the suffering of millions of civilians ensnared by the conflict, as occurred with the Comprehensive Agreement on Human Rights at the beginning of the Guatemalan peace process in March 1994;

2) Clearer channels for combating the illicit drug trade by separating and potentially demobilizing a nationally organized, well-armed political insurgency from the traffickers within its ranks;

3) Increased capacity to focus on rule of law challenges like murders of trade unionists, which was a critical blocking point in the Colombia Free Trade Agreement;

4) Deflating the anti-American bluster of detractors in the region that equate Plan Colombia with Cold War military hegemony, including from two of the host nation partners in the negotiations; and

5) Visible leadership for peace is in line with the historic, democratic values of the United States and will offer a more beneficial legacy in the region than current policies.

Though a minor partner when compared to military assistance, US civilian agencies like the US Institute of Peace, US Agency for International Development and Inter-American Foundation have important experience in promoting peace building, rights and social inclusion in Colombia, as well as supporting the most vulnerable populations.

The US could also work to engage the Colombian business community for peace based on relationships developed through free trade advocacy. Colombia loses an estimated 4.3 percent of GDP each year due to internal displacement alone.

The time has come for the United States to define a strategy and support for peace in Colombia. President Obama has identified balancing “security” and “social inclusion” as critical for ensuring the peace process is sustainable beyond combat and demobilization issues, which are the focus of the negotiations phase. US agencies, civilian and military, have relevant experience in both security and social inclusion, and should be engaged in an overarching US policy to ensure a lasting peace in Colombia.

Milburn Line is executive director of the Joan B. Kroc Institute for Peace & Justice at the University of San Diego. From 2007 to 2009, he managed a project in Colombia that worked with civil society and state institutions working to protect human rights.