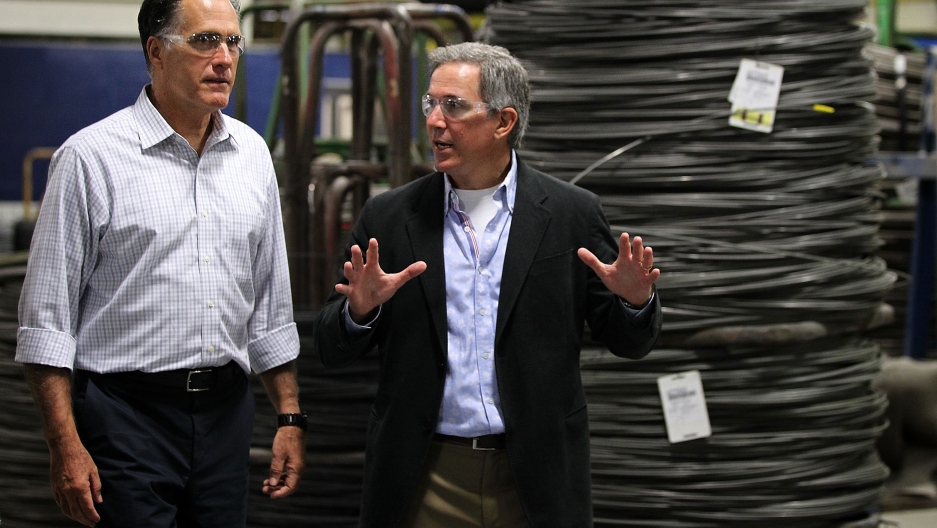 CLEVELAND, Ohio — Who are you calling a tossup? With just days to go before early voting starts in Ohio, the Buckeye State is looking less like the battleground it has long been, and more like a comfortable win for President Barack Obama.

Over the past week, this Midwestern electoral prize has hosted both major candidates, seen unprecedented amounts of cash flow in for a nasty Senate race, and, just incidentally, moved over to the “leaning Obama” column in the polls of respected political organizations.

The website Real Clear Politics now shows Ohio as a blue state, while another site, 270towin, has moved its arrow from its uncompromising middle position ever so slightly toward the president.

Recent polls show Obama up by as much as 10 points here and, in general, the voters of Ohio seem to be stating their preference in no uncertain terms.

The reason, according to Karen Beckwith, political science professor at Case Western Reserve University in Cleveland, is simple: Republican challenger Mitt Romney has been unable to connect with voters.

“The mistakes that Romney has made are consistent with the image the Democrats have tried to paint of him,” said Beckwith. “He is seen as a man of extraordinary wealth who cares little about those not like himself, who does not at all understand their circumstances."

More Highway 2012: Is the Romney camp a caricature of itself?

Romney would always have had an uphill battle in Ohio, says Beckwith. Ohio depends heavily on the auto industry, and Romney’s widely publicized calls to “Let Detroit Go Bankrupt” did him few favors here. After Obama green-lighted the $85 billion bailout in 2009, GM and Chrysler bounced back, and unemployment in Ohio is now actually below the national average. Ohio’s workers will not forget who stood where when their survival was at stake, says Beckwith.

“The president is seen as a man who took action to save the state, while Romney did not even understand why it was necessary,” she added.

The now infamous video from a fundraiser in Florida last May, in which Romney dismissed 47 percent of Americans as irresponsible takers who expected government handouts, was a key moment in the consolidation of this perception, said Beckwith.

“There are differences between gaffes and mistakes,” said Beckwith. “[In Romney’s case] it was seen as a damning mistake in which the candidate revealed himself. To the voters it seems clear that he just doesn’t get it, and that the claims about him are, in fact, true.”

Romney’s recent campaign sweep in Ohio, where he hit four towns in two days, did not help much, according to Beckwith.

Time and again, Romney tried to deliver the message that he cared about the problems of working Americans and the poor; he also released a new ad with this theme.

“If you watch the video clips of his campaign appearances, you hear him say, over and over, ‘President Obama and I both care about average Americans,’” said Beckwith. “If at this point in the campaign you have to try and convince voters that you actually care about them, it is a very bad sign.”

Barring any dramatic developments, Obama is on track to win Ohio in November, which will severely damage any chance that Romney has to gain the White House. Without Ohio’s 18 electoral votes, he has few realistic paths to victory.

“It is unlikely that either candidate will be able to do anything to recast his image with the voting public this late in the race,” said Beckwith. “It is not looking good for Governor Romney.”

Prospects are also dimming for a young Republican senatorial candidate in Ohio. Josh Mendel, a 35-year-old Iraq War veteran, has been locked in a very nasty race with Sen. Sherrod Brown. The state has been flooded with outside cash in an attempt to wrest the seat away from the Democratic incumbent.

The result has been a negative campaign that has bombarded the airwaves with vicious ads. Mendel has been criticized for factual errors on a regular basis, earning him several “pants on fire” citations from fact-checkers, allowing the Brown campaign to designate Mendel as “the candidate of the big lie.”

The race had been close, but Brown is now pulling ahead.

“For a while in August, you could not turn on the television without being subjected to these ads,” said Beckwith. “It has diminished a bit now.”

If pressed, Beckwith is ready to predict that Brown will retain his seat come November.

In all, Ohio is looking like a good bet for Democrats.

“It should have been a good year for the Republicans,” said Beckwith. “You have an incumbent president who is not doing well. The economy is bad. But Romney’s own mistakes have undermined his claim that he understands the voters … he does not seem to have a good sense of where he is. It is early days yet, but it is a fair assessment that Obama will win in November.”