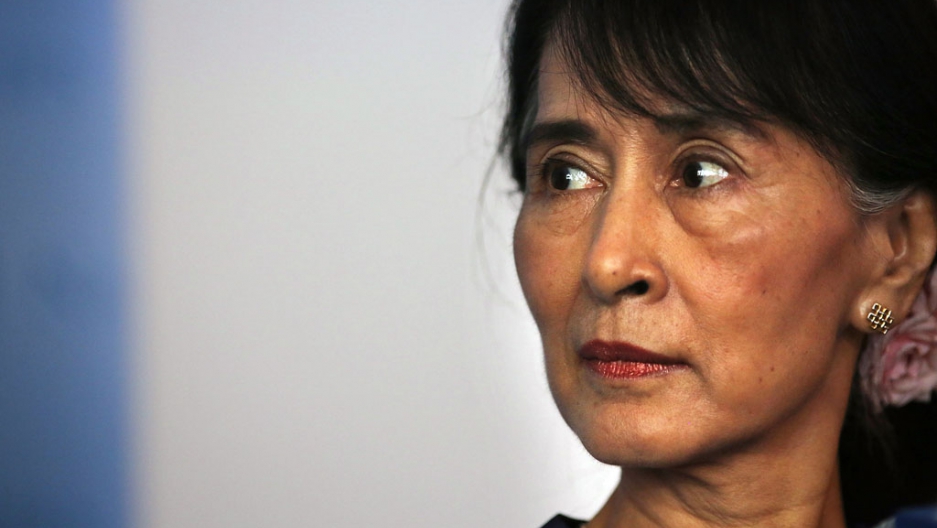 SAN FRANCISCO — In the front rows at the San Francisco Freedom Forum were heroes of human rights from around the world, all looking up at Aung San Suu Kyi and all that she has come to stand for.

The Burmese opposition leader and Nobel Peace Prize laureate was taking the stage Friday to give a speech titled “The Long Road to Freedom,” and for these other activists still traveling on that long and often treacherous road this was a moment to pause on the journey and perhaps summon the strength and inspiration they’ll need for the many miles they have left to travel.

There sitting together were Iranian author and former prisoner of conscience, Marina Nemat, and Manal Al Sharif, who has garnered global attention in her fight for women’s rights in Saudi Arabia. And next to them was the Kazakh theater director and human rights defender, Bolat Atabayev, who has bravely spoken out against the dictatorship in his country and been jailed for it.

And just down the row of seats was Kasha Jacqueline, who risks her life every day as an openly homosexual person who is fighting for LGBT rights in her native Uganda. And staring straight ahead in a reverent silence was Yang Jianli, the Chinese scholar and pro-democracy activist who has been imprisoned in China for his work on behalf of labor rights.

Garry Kasparov, the Russian advocate for democracy and human rights and considered the world’s greatest chess master, was supposed to speak at the event but his work heading up a social movement against Russian President Vladimir Putin prevented him from attending in person. Instead, he appeared on a video conference, praising the work of Aung San Suu Kyi and the effect her steadfastness after 15 years of house arrest and persistent opposition to the military junta has had on freedom fighters in every corner of the world.

“She inspires us all,” Kasparov said.

With her signature poise, Aung San Suu Kyi looked regal as she stepped to the podium to receive the Vaclav Havel Prize for Creative Dissent which was inaugurated this year by the Freedom Forum at an event produced this year by the Human Rights Foundation. She was dressed in a pink shawl with a royal blue border and a dress which has the same matching colors in symmetrical patterns. She wore a string of pearls with matching earrings. And the speech she gave was as carefully considered and as starched and symmetrical as the outfit she was wearing.

Her words were eloquent and meaningful and uplifting, but they were also very safe. It did not take long to realize that the freedom fighter, who was elected to parliament last year and heads the National League for Democracy party, is steering in the direction of a political leader. And perhaps understandably in this turn in the ‘long road,” she has learned to navigate her way forward very carefully.

She avoided careening into the many questions about human rights issues for minority communities that still linger in Myanmar, formerly known as Burma. Forced labor and forced displacement are still widespread, particularly in the Karen State, where the Karen minority live in a remote mountainous area where conflict with the military has gone on for decades.

Just as GlobalPost’s Hanna Ingber wrote about, in her speech at Harvard University, Aung San Suu Kyi failed to offer any detailed address on the violence that continues in the Rakhine State near the border with Bangladesh where Muslim ethnic Bengalis known as the Rohingya are denied most basic rights. She stepped around any direct mention of the ethnic Kachin, who are predominantly Christian, and the tens of thousands who have been displaced in a struggle that pits the military against Kachin rebels fighting for autonomy.

And as she turned toward the end of her remarks, she reflected, “I have not talked much about what we went through in the past.”