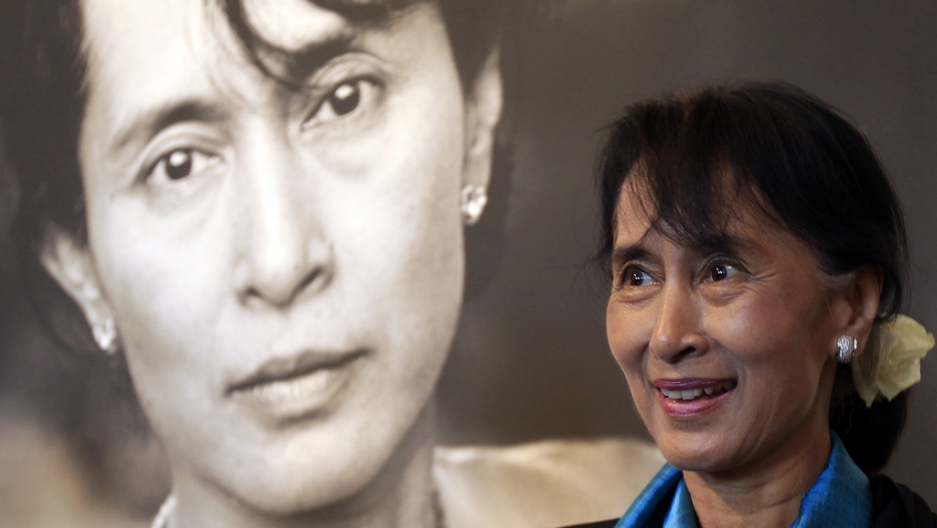 Myanmar democracy icon Aung San Suu Kyi tours the Nobel Peace center in Oslo on June 16, 2012. Suu Kyi on June 16 pledged to keep up her struggle for democracy as she finally delivered her Nobel Peace Prize speech, 21 years after winning the award while under house arrest.
Credit: AFP
Share

One by one, the members of a large group of students approached a microphone to tell Nobel laureate Aung San Suu Kyi that she had been an inspiration to them. “I’m very proud to say you have been our hope,” said a Pakistani student. “It is a great honor for me to hear my personal hero speak,” said another.

The forum at Harvard’s Kennedy School Thursday evening was little shy of a lovefest for the elegant and charismatic opposition leader from Myanmar (also known as Burma) who has charmed her way across the United States during a 17-day tour. Until someone mentioned the “R” word.

Thanking Suu Kyi for “being our inspiration,” a student from Thailand said: “You have been quite reluctant to speak up against the human rights violations in Rakhine State against the Rohingya … Can you explain why you have been so reluctant?”

The mood in the room suddenly shifted. Suu Kyi’s tone and expression changed. With an edge in her voice, she answered: “You must not forget that there have been human rights violations on both sides of the communal divide. It’s not a matter of condemning one community or the other. I condemn all human rights violations.”

The Rohingya are a group of about 800,000 Muslim ethnic Bengalis who live in western Myanmar’s Rakhine State, which borders Bangladesh. The government has denied them the most basic rights, including citizenship, for decades. They need permission to marry, travel and work. Last June, violence in Rakhine State left hundreds of Rohingyas dead, thousands of properties destroyed and about 100,000 people displaced, according to activists.

The United Nations calls the Rohingya one of the world’s most persecuted groups.

Given Suu Kyi’s reputation as an international symbol of courage, determination and respect for human rights, one would be forgiven for assuming that she would leap at the chance to defend a group of people so badly persecuted in her own homeland. But she didn't.

Her stance on the Rohingyas oscillates between silence and a cautious, neutral statement that “both sides,” meaning both Muslims and Buddhists in Rakhine, have faced persecution.

The plight of the Rohingyas has been so bad for so long that most political analysts and longtime Myanmar watchers assume that Suu Kyi, the champion of human rights, recognizes their struggle and just can’t be vocal about it. Now she's a politician, the thinking goes, her hands are tied.

Myanmar will hold general elections in 2015, and Suu Kyi and her National League for Democracy party hope to win enough seats in parliament to amend the country’s constitution. The NLD will need the support of the Myanmar people, who largely hold great antipathy toward the dark-skinned, poor Rohingyas they often call terrorists and infiltrators.

“Politically Aung San Suu Kyi has absolutely nothing to gain from opening her mouth on [the Rohingyas],” Burmese commentator Maung Zarni told Daily Beast columnist Peter Popham. “She is no longer a political dissident. She’s a politician, and her eyes are fixed on the prize, which is the 2015 majority Buddhist vote.”

The executive director of Amnesty International USA, which has documented abuses against the Rohingya and also hosted Suu Kyi during her US visit, said there is an “expectation of leadership” from Suu Kyi on the issue but gave a slightly more forgiving response to the Nobel laureate’s current stance.

“I don’t know that she has landed on a fully considered, long-term approach to the issue,” Suzanne Nossel said in an interview. “I think her comments reflect a measure of tentativeness. A sense that she is analyzing and trying to be very careful.”

“Clearly the issue is hotly politicized in Burma, and she is newly launched on the political scene and is trying to navigate carefully,” Nossel said.

Becoming a larger voice in Myanmar’s parliament is a laudable goal, and changing the constitution, which was passed during the junta-era by a sham vote, is crucial if the country wants true, lasting reform.

But Suu Kyi’s stance on the Rohingyas raises many questions.

Is her reluctance — or perhaps more accurately, refusal — to come out in support of the ethnic group worth the goal of taking a majority in Parliament?

Or is her sacrifice of principles a slap in the face to those who worked for her release from house arrest and election?

Can Suu Kyi continue to stand as a symbol of courage and humanity’s highest ideals, on par with Mahatma Gandhi and Nelson Mandela, if she remains silent on such an important issue?

And finally, what is the point of Suu Kyi being released from house arrest, elected to parliament, adorned with accolades and awards and viewed as a global inspiration, if not to stand up for those who need her most?

Back at the Kennedy School, the student who mentioned the “R” word quickly retreated from the microphone and the Lady moved on to the next question.

But something in the air was lost.