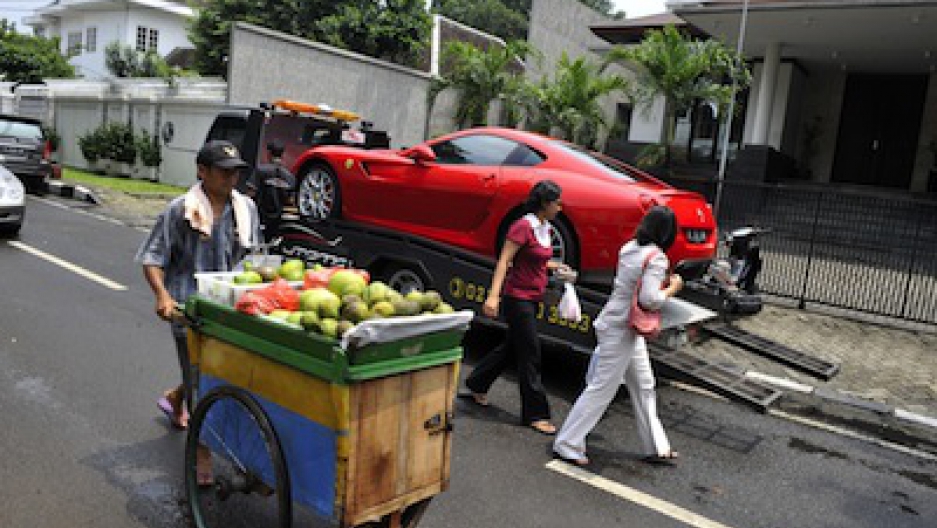 A street vendor pushes his cart past a luxury Ferrari sports car being delivered to the residence of a wealthy Indonesian resident at the affluent Menteng district in Jakarta on February 16, 2010.
Credit: ROMEO GACAD
Share

Perhaps Indonesia deserves a closer look. According a new report from the Switzerland-based Julius Baer Group, Indonesia has the world's fastest-growing number of millionaires, known in financial market lingo as "high net worth individuals."

Is Indonesia on track to becoming a wealthy country in the near future? Heavens no. Half the population, according to the World Bank, is scraping by on $2 per day.

In other words, in Indonesia, you are more likely to encounter someone like this guy pushing a fruit cart than the person receiving that new Ferrari. That said, Indonesia could very well grow its stock of millionaires from 33,000 to a whopping 104,000 in just two years, according to the report.

That would exceed America's total GDP -- now at $15 trillion, according to the World Bank.

And now you know how that flashy Singaporean nightclub can get away with selling a $26,000 cocktail.