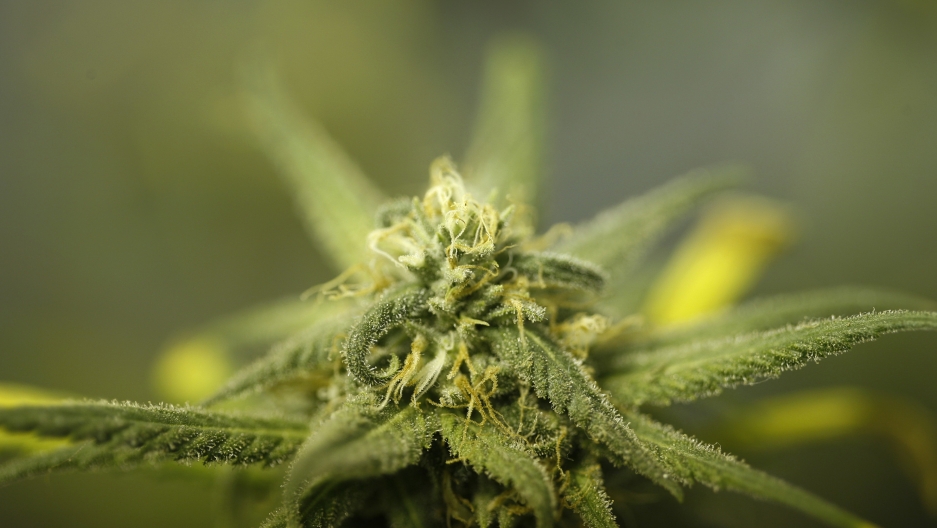 MONTEVIDEO, Uruguay — In November 2010, 68-year-old Argentine writer Alicia Castilla moved across the River Plate to Uruguay in search of a tranquil life.

But just months later, her new home — set back from a pristine white beach an hour from the capital Montevideo — became the target of a police drug raid.

“Fourteen officers stormed in,” she told GlobalPost. “They thought I was the female version of Pablo Escobar.”

Castilla, a longtime activist for the legalization of marijuana and a user since her twenties, was growing 29 cannabis plants, for personal use.

She endured a 95-day stint in jail following her arrest, and today is facing a two-year prison sentence for producing an illegal substance.

Castilla’s case opened a fiery debate about the drug.

In this peaceful South American country, personal use of marijuana is not a crime but there’s a legal gray area around growing the plant.

Following her release in May last year, lawmakers of the Broad Front, the ruling center-left coalition, sent a bill to Congress that proposed legalizing pot production, with a limit of eight plants per household.

That was similar to a bill put forth by opposition politician in 2010.

Now, a parliamentary commission is expected to begin debating a third, far more radical idea — a state monopoly over the cultivation, commercialization and sale of cannabis.

The bill, introduced by the administration of 77-year-old President Jose Mujica, a former left-wing guerrilla, has caused a stir across Latin America.

Coca-producing Bolivia said it would be open to implementing similar measures. Chilean senators followed by presenting a cannabis legalization bill of their own.

They are the latest to support the softening of anti-drug policies, which has gained momentum from Argentina to Mexico and California.

Mujica believes his plans put Uruguay, a country of just 3.4 million people, “at the vanguard.”

Lately, the "vanguard" does not look too far off for Argentina's smaller neighbor, at least in a liberal sense. Uruguay is set to legalize abortion, which would make it the only Latin American country other than Cuba to do so, reports The Associated Press.

The United Nations, however, labeled the marijuana bill “disappointing” and argued it contravenes the organization’s 1961 convention on narcotics.

Seated in an armchair emblazoned with images of marijuana leaves, Castilla — popularly known as “Señora Cannabis” — says she is pleased the government supports a move away from interdiction.

“But this is a step backwards,” she argues.

Castilla is opposed to a database and monthly limit for users proposed by government ministers.

She also branded a proposal to obligate users to go to rehab as “fascist.” The measure, put forward in a complimentary bill, would see those found high in public forced into “assistance centers.”

Julio Calzada, secretary general of Uruguay’s National Committee on Drugs, told
GlobalPost that maximum consumption — for smoking or eating — would be 40 grams per person per month.

“Individual rights have to be respected,” Castilla says. “It’s not the role of the state to determine how much we consume.”

“The bill is headed in the wrong direction,” agrees Sebastian Maurell, 19, a marijuana smoker.

He is lobbying lawmakers to ensure they don’t discard the idea of legalizing domestic production.

Vaz, 45, heads about 1,000 organized activists who want Uruguay to institutionalize the model of “cannabis clubs” used in the semi-autonomous Basque region in northern Spain.

There, some 300 nonprofit associations grow cannabis and share it among members. The clubs occupy a gray area in Spanish law since marijuana consumption, as in Uruguay, is decriminalized.

“It’s far more practical to let users regulate themselves rather than impose a top-down state model,” Vaz says as he rolls a cigarette.

The father-of-three spent a year in prison in 2007, but continues to cultivate marijuana at his home in Montevideo, and even helped organize a competition earlier this month for cannabis growers.

He says domestic production now stands at 6 percent of an estimated 50,000 pounds consumed annually in Uruguay. The rest is trafficked from Paraguay by small cartels.

“The government should play an overseeing role,” Vaz tells a meeting of the National Committee for Cannabis Legalization before slurping on a mate, Uruguay’s ubiquitous hot herbal drink.

He wants licenses for growers and regular inspections by authorities to ensure clubs don’t sell to non-members or under-18s.

“It’s far better for those who want to start smoking to be guided by an association rather than by a drug dealer,” he says.

Sebastian Sabini is president of the parliamentary commission that is debating the bill and a young lawmaker who admits to having smoked marijuana.

He says home cultivation could be incorporated into the new law.

“We think the two bills are complementary,” says Sabini, who believes it “absurd” that people like Castilla who grow marijuana for personal use should face criminal charges.

“The idea, though, is for the state to be able to supply 100 percent of users who today have to resort to the black market.”

Mujica has said that 150 hectares of plantations — an area roughly the size of 280 American football fields — would be required to meet demand. The government has hinted it will use military land to ensure security.

Sabini also launched a fierce defense of the bill, which, according to the president, would need 60 percent approval in Congress to pass.

He said the plans do not flout the UN narcotics convention since they are designed to improve the health of Uruguay’s 18,000 marijuana users by regulating quality.

And he insists a consumption limit is not Orwellian, but a necessary measure to prevent Uruguay from becoming an exporter of cannabis.

“We need to ensure we meet internal demand,” says Sabini, a member of the left-wing Tupamaros political movement. “But there needs to be a limit so people don’t sell to neighboring countries.”

The president has also said a private company would be contracted to sell the cannabis.

Castilla, though, is far from convinced by the strategy. “This is in no way a progressive bill,” she says.

She has been a staunch advocate of marijuana law reform since she lived in Brazil in the 1970s, writing two books on the drug and surviving an 11-day hunger strike last year in protest of her arrest.

But Calzada, the secretary general at Uruguay’s drugs committee, claims that by separating the marijuana and hard drug markets, consumption of the latter and violent crime will drop.

Uruguay has an estimated 5,000 regular users of “paco,” a highly addictive cocaine-based paste, according to the drugs commission.

“We seize about 10 percent of all marijuana,” Calzada says in his office overlooking a murky River Plate estuary. “And while it’s impossible to stop contraband, this law would mean the state — not dealers — controls the 90 percent.”

Despite accusations of being totalitarian, the bill represents a kick in the teeth for Washington’s “war on drugs” in Latin America, first given impetus by President Nixon in the 1970s.

There have been more than 50,000 drug war-related deaths in Mexico since the government began waging a military assault against the cartels in late 2006.

“Uruguay has been at the fore of social reforms since the beginning of the 20th century,” says Martin Collazo of ProDerechos, a group that lobbies for the legalization of marijuana.

The country’s 1918 constitution made it one of the first Latin American countries to officially separate the state and Catholic Church.

It has also supported Bolivian President Evo Morales’ call to legalize the coca leaf — the key ingredient in cocaine but harmless in its raw state.

Hillary Clinton, the US secretary of state, last month praised Uruguay as “an example to the world for its promotion of peace and human rights.”

“People and politicians are putting up with a useless and unjust war,” says Calzada. “How much longer do we need to wait for an alternative?”