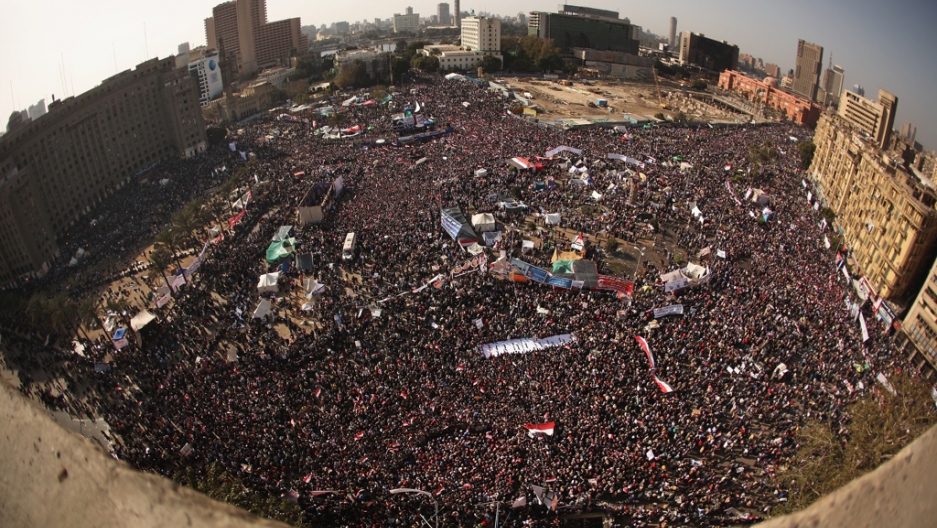 Egyptians gather in Tahrir Square to mark the one year anniversary of the revolution on Jan. 25, 2012 in Cairo Egypt.
Credit: Jeff J. Mitchell
Share

CAIRO, Egypt — Depending on who you ask, Tahrir Square is either getting a makeover or it's being airbrushed.

In less than a week, the Cairo municipality transformed the square, made famous as the center of the protests that toppled former President Hosni Mubarak.

Fresh grass and flowering shrubs now blanket the dirt-laden center divider, which had been trampled by protesters, security forces and squatters over the past year. Workers rewired lampposts and installed traffic lights.

In the most controversial move, government workers, under the auspices of riot police, whitewashed a nearby wall that had been cloaked in colorful revolutionary graffiti. The images depicted the story of those slain during the uprising and the subsequent clashes with security forces.

Young activists and artists immediately repainted the wall, on Mohamed Mahmoud street, throwing up new, angry pieces chiding the government of President Mohamed Morsi for attempting to “erase” the revolution.

“Wipe it off and we will draw it again, you cowardly regime!” reads one fresh tag.

“It signifies, I think, a sort of inclination to erase people’s memory of what exactly happened [over the past year and a half],” said Ganzeer, a prominent Egyptian graffiti artist who goes by his street name. “And maybe rewrite it the way [the government] sees fit.”

The continued battle for Tahrir — and for public space more generally in post-uprising Egypt — highlights the larger, ongoing debates about the country’s progress.

For some, the election of Morsi, Egypt’s first democratic and civilian leader, means the revolution is over. Scattered protests and other remnants of the uprising, they say, should be halted or removed. For them, it’s time to move on.

“I don't see how cleaning and painting over obscene signs will erase history,” said Gamal Rashad, the head of the Cairo Cleanliness Authority, which is assisting in the renovations.

The CEO of Perfect Quality for Construction, the company hired by the government to re-pave Tahrir Square and some of the surrounding streets, said he was given orders to finish the job “as quickly as possible.”

Those who believe the revolution is not yet over, who continue to fight for police reform and social justice, say that erasing the graffiti is a disservice to those who died in the uprising.

For activists, their ability to take control of the square was a victory for a population long denied access to public space by a regime intent on quashing dissent.

In the 18 days of the 2011 uprising, Tahrir Square became a utopian mini-state where Egyptians from all walks of life united and were protected. And while it has since descended into a dangerous epicenter of clashes, sexual harassment and general street-level crime, its decline is seen as a reflection of Egypt’s ongoing political and socio-economic problems.

“The image [of a clean square] is deceptive, it won’t end anything politically,” said 26-year-old Mona Ibrahim, who works at a travel agency on the same street where the murals were painted.

“How am I supposed to feel happy about a few shrubs and some grass?” she said. “They aren’t solutions to our root problems.”

Harnessing the oft-defiant art form as a way to fight back against still-standing provisions limiting free speech, activists and artists have given birth to a layered and uncensored commentary on Cairo’s walls.

The graffiti portrayed everything from police violence to sectarian unity and life under military rule, after Egypt’s army seized power in the wake of Mubarak’s ouster.

More from GlobalPost: A clash of civilizations? Not so much.

“I’m the one that burned the police van,” reads one new tag on Mohamed Mahmoud.

“We are going to try the military,” says another.

Cairo residents would come by every day to observe the graffiti — sometimes portraits of friends or relatives killed in the violence, Ibrahim said.

“Everyday people came to take photos. It was real. It was sincere,” she said.

Ganzeer, who has produced some of Cairo’s most famous street illustrations, says the “organic” nature of the art form is what makes it more sincere — a raw and unregulated form of expression that defies governments in times of turmoil.