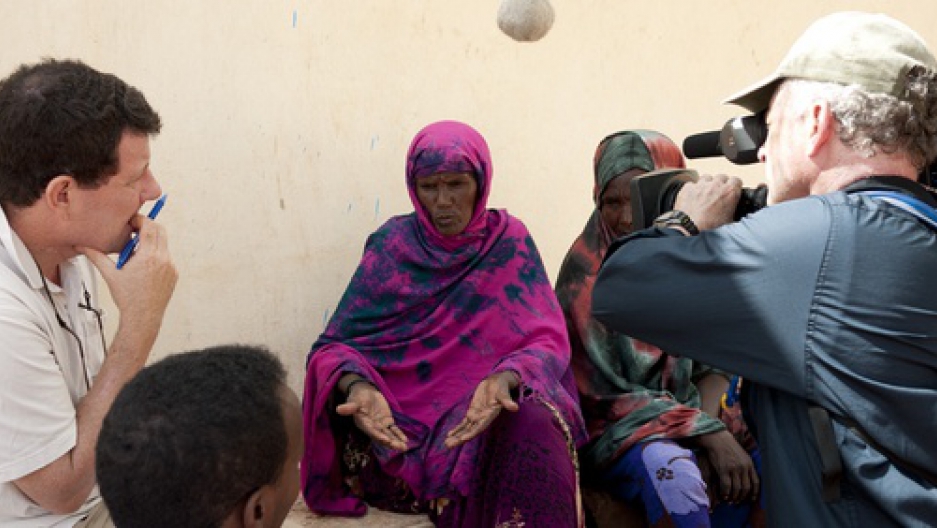 Nicholas Kristof interviews women in Africa during the filming of his new documentary, Half the Sky, airing on PBS next week. (Photo courtesy of Independent Lens/PBS.)

The journalism and ideas of Pulitzer Prize winners Nicholas Kristof and Sheryl WuDunn are the foundation of a new PBS documentary series called "Half the Sky."

The series is based on their best-selling book "Half the Sky: Turning Oppression into Opportunity for Women Worldwide." The film tracks women who create economic opportunities in their communities by standing up to oppression.

In turning the book into a movie, Kristof and WuDunn get some help from women leaders like Hillary Clinton and Gloria Steinem, and celebrities like George Clooney, Diane Lane, Eva Mendes and Olivia Wilde.

Wilde, one of the reporter-storytellers in the film, found the experience of reporting from Africa very emotional and familiar. Wilde grew up with her mother, Leslie Cockburn, filing reports from conflict zones.

"For me, this was kind of like a roots tour of sorts," said Wilde, who felt that, in making the documentary, she understood for the first time what her mother's life had been like as a journalist on the front lines.

It also showed her the power that comes with celebrity, and how that power can be used to change the world.

"It absolutely made me understand the responsibility that comes from having a voice," she said. "That this documentary was only made because of the participation of actresses, is kind of extraordinary."

"What I really respected about this documentary is that it wasn't suggesting that micro-finance is a silver bullet, that these issues have been solved," Wilde said. "Micro-financing has not worked in a lot of the world, and yet, it seems to be working in this one community in Kenya."

Wilde, who is best known for her roles on "The O.C.," "House" and "Tron: Legacy", says that making this documentary married her two passions: film-making and journalism. She hopes to continue to participate in projects like this one, and to devote her career to documentary film-making.

"Celebrities have a strange ability to make the world seem smaller," Wilde said.

She hopes to use her celebrity to bring these issues to the forefront, and to show people that Africa is not as far away as they might think.