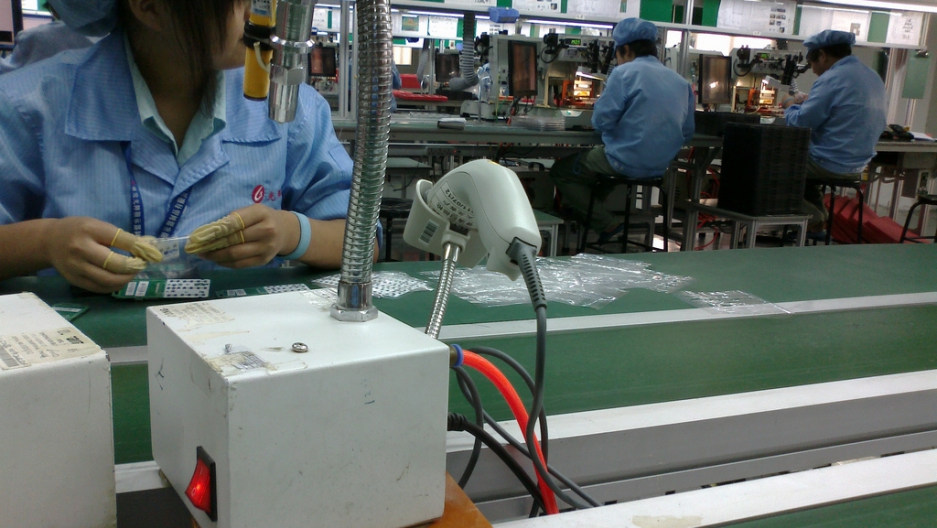 Student interns at the Global-Tech factory sit on backless stools and hunch over their assembly line. They must complete the same operation every 13 seconds, non-stop, cleaning 3,920 circuit boards in 14 hours, in a factory that Mitt Romney's companies invested in.
Credit: Institute for Global Labour and Human Rights on Flickr
Share

A report released Thursday from the Institute for Global Labour and Human Rights investigated the dismal conditions at the Global-Tech factory in Dongguan, China, now known as the sweatshop that operated through investments from Mitt Romney's Bain Capital and its affiliate companies, Brookside and Sankaty from the 1990s to the present day.

The report accuses Romney and his companies of being complicit, if not responsible, for perpetuating slave labor at the factory.

The news media has been flooded with reports that Romney's companies were complicit in outsourcing jobs to factories in China with lax labor rules this month, but this is the first report to go inside the factory itself and speak to the workers inside about the misery they face every day.

Romney and his campaign staff maintain that he cannot be held responsible for the actions taken by the companies he was CEO of (Bain) or sole shareholder, chairman and president of (Brookside), but the documents and videos obtained by the Washington Post, Mother Jones, and now the Institute for Global Labour and Human Rights (IGLHR) tell a different story – one in which Mitt Romney witnessed the horrific conditions of the factories, and then knowingly invested in them while doing nothing to attempt to report the terrible working conditions.

According to filings with the Securities and Exchange Commission obtained by Mother Jones, in 1998, Brookside Capital Partners Fund, a Bain Capital affiliate, noted "it had acquired 6.13 percent of Hong Kong-based Global-Tech Appliances...That August, according to another SEC filing, Brookside upped its interest in Global-Tech to 10.3 percent."

For the next two and a half years, until just after Romney left Bain, his companies invested a total of $23 million in the Global-Tech sweatshop near Hong Kong in Dongguan, China.

"If Mr. Romney had spoken up, conditions at Global-Tech might be far better today. Sadly, in 2012, Global-Tech remains a brutal sweatshop, where workers are paid starvation wages of $1.00 an hour and have no rights," says the report.

Global-Tech manufactures everything from small to mid-sized household appliances to cell phones, and employs over 4,000 workers, some of them un-paid teenage "interns." Those who aren't students are forced into working 11-hour days regularly, for wages less than 6 percent of American minimum wage. Overtime is forced on weekends, and those who don't show are fined more than they can afford, making it impossible to walk away, although the company states that any overtime is "voluntary."

The work is mind-numbing and painful. Employees are forced to complete repetitive tasks at breakneck speeds (such as clean and assemble a new circuit board every 13 seconds), and they are not allowed breaks.

The IGLHR report contains statements from the workers, as well as pictures of graffiti drawn on bathroom stalls.

The report details how workers live in dormitories without proper ventilation, or even mattresses. There are generally 12 people assigned to a single room full of bunk beds that has only one squat toilet and an area to take sponge baths out of a bucket. Hot water is sparse, and the rooms have only two, dim 40-watt bulbs.

The rooms are charitably described in the report as "primitive."

Mitt Romney, in a video leaked earlier this month, spoke to his campaign donors as having seen these dormitories, and managed to be convinced that the workers counted themselves lucky, a sign taken from the fact that the Global-Tech factory has had no strikes or work stoppages.

More from GlobalPost: What Romney's tax returns say about his investments in Chinese companies

However, as happy as Mitt Romney seems to believe the workers are, silent protests happen inside, although management "doesn't bat an eye."

In the cafeteria, where rotten food is served in individual portions (no second helpings are allowed) and dead insects can regularly be found mixed in with noodles, the workers dump their food on the tables.

"No matter how hungry they are, the workers cannot stomach it," says the report.

Photos show that this form of protest happens regularly, as nearly every table in the room is piled with discarded food.

The IGLHR report claims that had Romney spoken up about the conditions he witnessed and played a part in investing in, the Global-Tech factory could have cleaned up its act and complied with not only Chinese labor laws, but international ones, which it's a far cry from at present.

To read the entire report and see the pictures smuggled from within the factory, click here.

For more of GlobalPost's coverage of worker's rights, check out our Special Report "Worked Over: The global decline in labor rights."