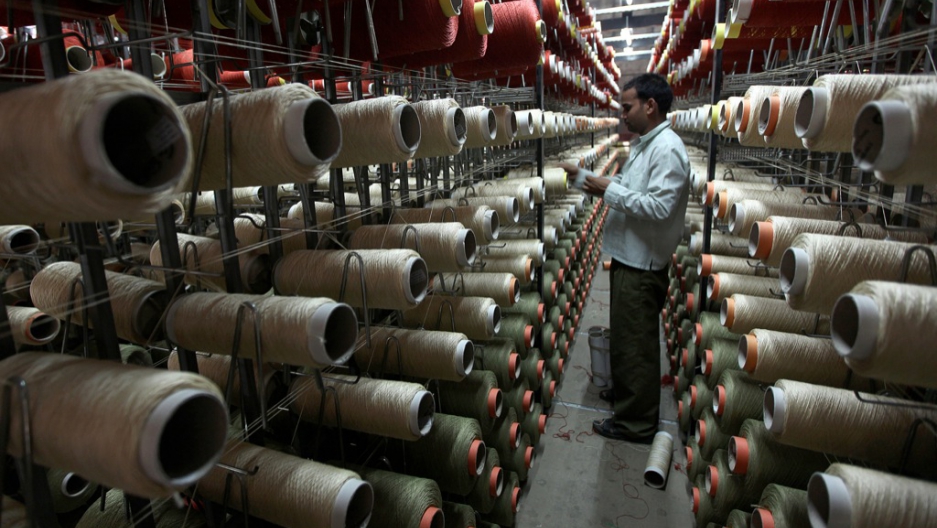 Taken on July 3, 2012, an Indian employee checks reels of thread on a carpet weaving machine at a factory in the Bari Brahmana industrial area of Jammu.
Credit: STRDEL
Share

Here's another effect of the growth of the middle class in developing countries like China: When wages and other production costs go up, companies start sourcing products from abroad -- just like those pesky US garment brands.

As the Times of India reports, India's leather industry is beginning to reap the benefits, as rising production costs and labor trouble in China have forced companies there to start buying from Indian factories.

"The first indication of this (trend) came during the Shanghai Leather Fair when Indian manufacturers managed to sell goods, especially leather garments, to China," the paper quoted Rafeeque Ahmed, chairman, Council for Leather Exports, as saying. Indian leather companies have been participating in the fair for the last two years and have seen a clear increase in sales to their Chinese counterparts, the paper said.

In 2011-2012, the Indian industry exported leather products worth $4.9 billion, the highest ever.

But it's a funny trade for India. Working with leather is deemed "polluting" by the Hindu caste system, and for centuries the actual work was deemed fit only for Muslims and untouchables. Moreover, cow slaughter is banned in all but one or two states, so the industry survives on the (possibly fictional) practice of using only animals that die of natural causes.

As Andrew Buncombe writes for the Independent, that hasn't stopped the killing. But it's created a lucrative cattle-smuggling trade from India to Bangladesh (which Maher Sattar revealed leads to frequent killings by India's border guards, in a great piece for GlobalPost).

"The story of the annual smuggling of an estimated 1.5 million cattle says much about modern India – about the sometimes hypocritical treatment of supposedly sacred cows, the political power of right-wing Hinduism and the corruption that allows the £320m illegal trade to flourish," Buncombe writes. "But ultimately this story is about supply and demand. Hindu-majority India has an estimated 280 million cows but killing and eating them is legal in only a handful of states. Meanwhile, Muslim-majority Bangladesh, where beef is eaten with relish, suffers from a shortage of cattle. Half of the beef consumed in Bangladesh comes from its large, western neighbour."

True enough. But it's not just beef. It's also leather, a trade that Daniel Pearl wrote perceptively about for the Wall Street Journal before his murder.

"India is actually a major producer and consumer of leather, and only some of it comes from goat, sheep and buffalo," Pearl wrote back in 2001. "With a population that is an estimated 80% Hindu, India slaughters 14 million cattle a year, making it the world's fifth most active cattle killer, according to the United Nations Food and Agriculture Organization. Government tax breaks have helped make leather of all kinds one of India's biggest exports."