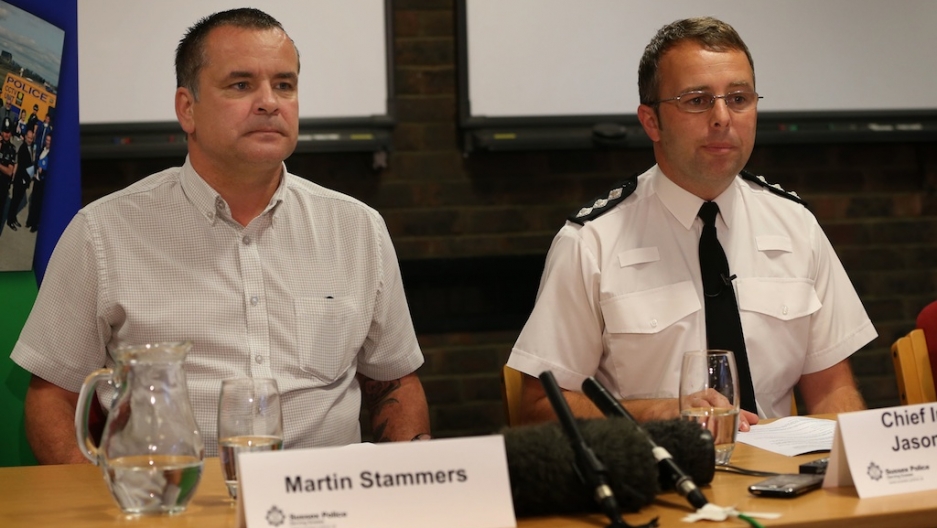 Martin Stammers, the father of Megan Stammers, talks to reporters at Sussex Police headquarters on September 28, 2012 in Lewes, England. Missing 15 year old schoolgirl Megan Stammers has been taken into protective custody after being found by French police in Bordeaux. Her school maths teacher 30 year old Jeremy Forrest, with whom she went missing 8 days ago, has arrested on suspicion of child abduction.
Credit: Peter MacDlarmid
Share

Megan Stammers, the 15-year-old British girl who went missing September 20, has been found in Bordeaux and taken into police custody.

Stammers was located with her high school math teacher, 30-year-old Jeremy Forrest, who has been arrested on suspicion of child abduction.

The pair were allegedly romantically involved, and their disappearance caused a scandal for the school at which they met and launched an international investigation involving Sussex police and Interpol, BBC News reported.

According to friends of Megan's, it was "obvious" that she was involved with Forrest.

“I don't know how it all started with Mr Forrest but to begin with she was really excited about it," one of Stammer's school friends who declined to be identified told the Telegraph. “She would tweet about being in love and show us his texts. But after it was reported she stopped and then deleted her Twitter account. She never spoke about it after that and she didn't tell any of us that she was leaving. She probably knew we would stop her.”

Megan's family expressed their relief that their daughter, who is being brought home by police escorts, was found.

"The past week has been absolutely terrible," the adolescent's birth father Barry Wratten told reporters, according to the Guardian. "You don't want to say it, but sometimes you think the worst. So this is wonderful news. It's brilliant. I can't say how relieved I am.

"I just want her back in the UK now with her family. My message to Megan would be that I love her very much, and that I am so glad she is safe. I'd also like to say that I am not angry with her at all – we all do silly things when we are young without thinking about the consequences."

The couple was found after being sighted several times. Forrest's father Jim also made a televised appeal on Thursday for his son and Megan to "please, please get in contact," according to the Guardian.