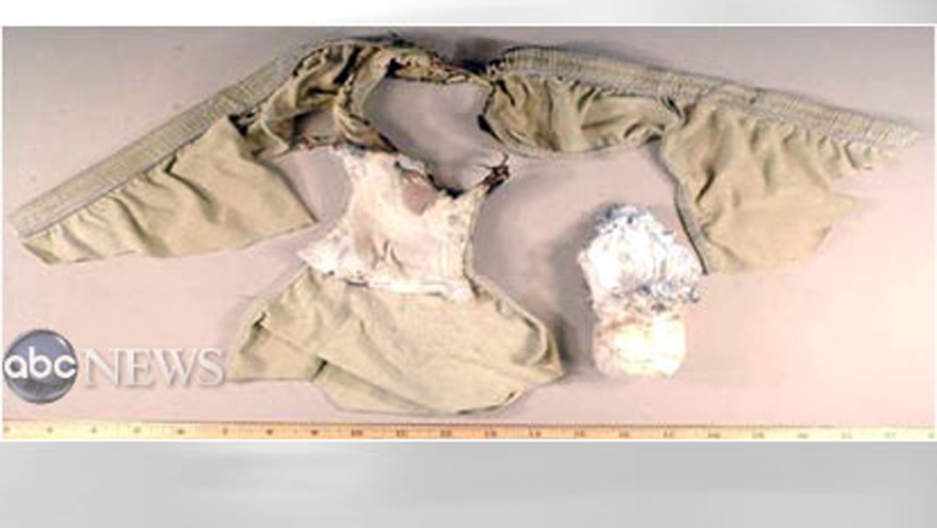 In this handout government image provided by ABC news, the underwear with the explosive worn by alleged bomber Umar Farouk Abdulmutallab, is all that remains of a failed attempt to down a flight over Detroit on December 28, 2009. The CIA reportedly thwarted another plot involving a bomb concealed in underwear on a plane that was to coincide with Osama bin Laden's death anniversary around May 2, 2012.
Credit: Handout
Share

Umar Farouk Abdulmutallab may have failed to blow up an airliner on Christmas Day 2009 because he didn't change his underwear.

The Nigerian man allegedly wore the explosive underwear for three weeks to make sure he was comfortable enough to get through security, only taking it off when he showered.

“We think ultimately, that probably is what caused a little bit of separation in the sequence of events in the explosion,” FBI agent Ted Peissig, who interrogated Abdulmutallab, told ABC News’ Detroit affiliate WXYZ.

Abdulmutallab pleaded guilty to attempting to blow up Northwest Flight 253 over metro Detroit, which was carrying 300 people. The device failed to detonate but the would-be bomber was given multiple life sentences.

The details were unearthed in an interview with two FBI agents who interrogated and secured a confession from Abdulmutallab after his arrest, reports the Daily Mail.

Peissig told ABC how Abdulmutallab attempted to detonate the bomb. After returning to his seat from the restroom, Abdulmutallab reportedly told the passenger seated next to him that he wasn't feeling well.

"And pulled a blanket almost completely concealing himself up to the chin," Agent Peissig tells ABC.

sing a plastic syringe, he then injected a mixture of liquids and solids into the explosive chemicals already packed into his underwear. Even though the bomb did not detonate, it caught fire and badly burned the terrorist in the groin.

Even though it's fortunate Abdulmutallab's dirty underwear caused the bomb to fail, Peissig told ABC that the fire was extremely dangerous.

"In speaking with the pilots collectively, there's no greater emergency on a plane than fire," says Peissig.

"To them, that is the worst thing that can happen. The planes themselves are no longer cable controlled, they're wire controlled. They could lose complete control of the plane if the flame impinged on the wiring," he explains.