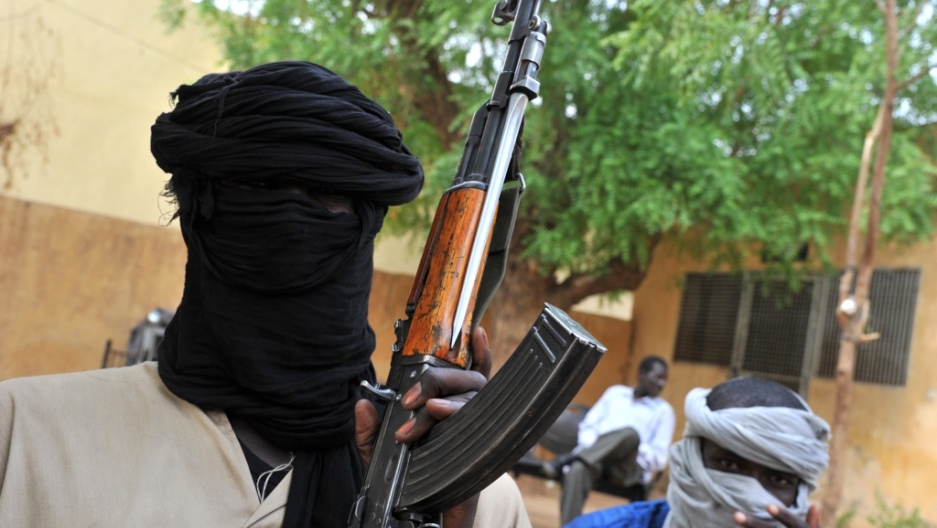 Fighters of the Islamist group Movement for Unity and Jihad in West Africa in the courtyard of the Islamist police station in Gao, in July 2012.
Credit: Issouf Sanogo
Share

NAIROBI — Plans to deploy a West African regional force to battle Islamist militants who seized control of northern Mali were held up after envoys at a high level meeting on the sidelines of the United Nations General Assembly failed to reach agreement.

Secretary-General Ban Ki-moon called the meeting, attended by Secretary of State Hillary Clinton and French President Francoise Hollande on Wednesday, to address West African plans for a 3,000-strong force to wrest control of the north from Islamist militants. Ban urged the world “not to abandon” Mali.

Security Council backing is the final diplomatic hurdle after Mali’s interim government agreed to host the force earlier this month. But while France and a number of West African countries favor a speedy deployment, the US is insisting that elections to establish a democratic government should come first.

“In the end, only a democratically elected government will have the legitimacy to achieve a negotiated political settlement in northern Mali, end the rebellion and restore the rule of law," Clinton said on Wednesday.

A military coup in the capital Bamako in March threw Mali into disarray just weeks before elections were due to be held. Although the military junta that took over has since been replaced, there is confusion as to who is really in charge.

Before the Security Council, Mali’s interim Prime Minister Cheick Modibo Diarra requested a mandate for “an international military force, one which would be composed of all those willing and able to help us reconquer occupied territories in the north of our country.”

Mali’s former colonial ruler, France, has strongly backed the regional military plan offering both logistical and intelligence support. Hollande used his first ever speech to the UN General Assembly to call for a resolution “to help Mali win back its territorial integrity”.

On Wednesday he reiterated his call for military intervention “as quickly as possible”.

Despite her insistence that political resolution in Bamako must come First, Clinton shared Hollande’s concerns. “We all know too well what is happening in Mali, and the incredible danger posed by violent extremists imposing their brutal ideology, committing human rights abuses, destroying irreplaceable cultural heritage,” she said.

“We have to train the security forces in Mali, help them dislodge the extremists, protect human rights, and defend borders,” Clinton said.

The proposed force would be provided by the 15 member states of regional bloc ECOWAS (Economic Community of West African States) and would be stationed outside the capital Bamako. Their target would be a coalition of hard-line Islamist militants, some linked to Al Qaeda, which seized control of the north of the country soon after the March coup.

Al Qaeda in the Islamic Maghreb (AQIM), Ansar Dine and the Movement for Unity and Jihad in West Africa (MUJWA) have set about imposing a harsh and brutal form of Sharia law, according to Human Rights Watch, a New York-based advocacy organisation.

Human Rights Watch accused the Islamists of recruiting hundreds of child soldiers, and said it had documented evidence of public floggings and executions and at least eight amputations conducted as punishment for alleged theft. The militants have also destroyed ancient religious shrines which they deem un-Islamic.

“The Islamist armed groups have become increasingly repressive as they have tightened their grip over northern Mali,” said Corinne Dufka, senior Africa researcher.

“Stonings, amputations, and floggings have become the order of the day in an apparent attempt to force the local population to accept their world view. In imposing their brand of Sharia law, they have also meted out a tragically cruel parody of justice and recruited and armed children as young as 12,” she said.

International reaction to the takeover of northern Mali has been slow but is now gathering steam.

In a statement earlier this month, the UN Security Council expressed its “grave concern about the continuing deterioration of the security and humanitarian situation in the north of Mali and the increasing entrenchment of terrorist elements including AQIM and affiliated groups.”

West African officials have said that an ECOWAS deployment will require funding and support from the UN. Previous ECOWAS military deployments in Liberia and Sierra Leone in the 1990s had patchy success and were marred by corruption and abuses.

During Liberia’s civil war the Nigeria-led force, known as ECOMOG, was nicknamed ‘Every Car Or Moving Object Gone’ for some officers’ indulgence in corrupt business dealings, including providing weapons to the armed factions it was there to stop.

In Sierra Leone ECOMOG had to be rescued from defeat by a UN and British force.

Observers say that Mali is looking increasingly like a failed state, with political disarray in the capital, a weak and divided military and an unchallenged Islamist occupation of nearly two-thirds of its territory.

“All scenarios are still possible, including another military coup and social unrest in the capital, which risk undermining the transitional institutions and creating an even more explosive situation”, said Gilles Yabi, West Africa Project Director at the Brussels-based International Crisis Group think tank.

Issuing a report on the chaos in Mali this week, Crisis Group’s Africa Program Director, Comfort Ero, warned: “The following six months will be crucial for the stability of Mali, the Sahel and the entire West African region.”