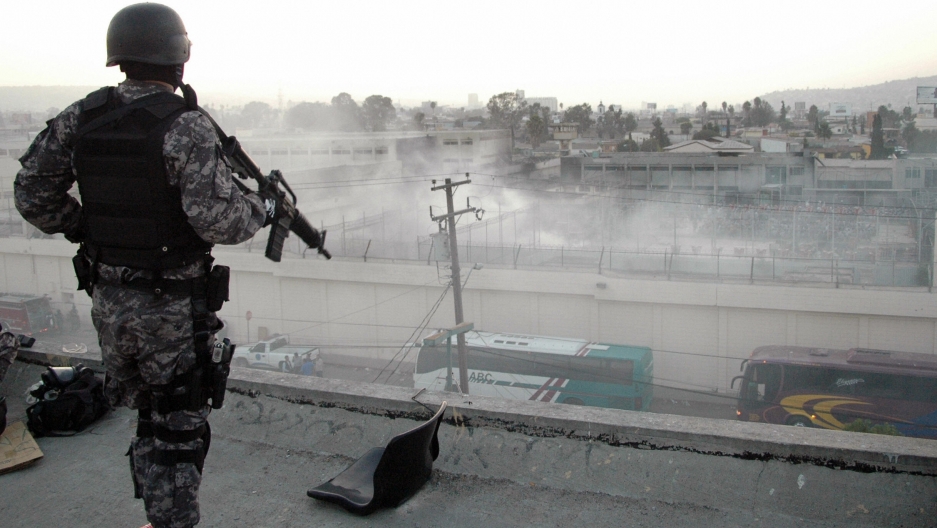 MEXICO CITY — The news was disturbing: 132 inmates burrowed through a tunnel and out of the prison in Piedras Negras, near the Texas border, in what would be the second-biggest jailbreak in Mexican history.

What followed was a familiar narrative. Sensational story lines surfaced — such as the overweight fellow who supposedly inched his way to freedom despite weighing nearly 250 pounds.

Politicians played the blame game over who was responsible. Local officials pointed the finger at the usual suspects: Los Zetas, the violent cartel of ex-elite soldiers-turned-mob.

Along the way, the awful truth emerged. The Sept. 17 great escape was no act of inmate ingenuity. Rather, it was cold corruption.

The inmates all walked out the prison door.

That cast new scrutiny on a correctional system in which inmates often run the prisons, escapes are common, and politics and power struggles get in the way of improvements.

It marked the 23rd mass jailbreak since President Felipe Calderon took office in December 2006 and launched a military crackdown on drug cartels and organized crime that has claimed more than 50,000 lives and swelled prison populations.

“The state disburses enormous resources for combating crime and detaining criminals, but has practically abandoned the inmates the moment they arrive in prison," said Raul Plascencia, National Human Rights Commission ombudsman, while presenting his 2011 prison report this week.

The report outlined an equally appalling situation behind bars and ranked Piedras Negras the worst prison in the country, although the commission noted that its investigators were denied access to the facility.

It said 521 inmates have escaped Mexican jails since 2010, while 352 died in riots. Some prisons had just one guard for every 70 inmates. Investigators also found prisoners having access to guns, drugs, alcohol and prostitutes and even owning fighting cocks and messenger pigeons.

"The country's prisons ... pass through a day-to-day crisis as a consequence of the lack of public policies in the field," Plascencia said, in comments published by the newspaper Reforma.

Calderon will leave office Dec. 1, handing off pressing prison problems to his successor, Enrique Pena Nieto, of a rival party that has long battled with corruption allegations of its own.

Pena Nieto hasn't said how he would fix Mexico's prison problems. Equally uncertain are his exact plans for pacifying Mexico, although he has promised to put more of an emphasis on fighting crimes such as kidnap, extortion and homicide instead of taking down cartel kingpins.

He brings the once long-ruling Institutional Revolutionary Party (PRI) back to the presidency, but the party already controls many of the country’s local governments. Today the PRI governs 20 of Mexico’s 31 states.

Calderon and politicians in his National Action Party (PAN) say prisons and security services especially in the states with PRI governments have been poorly run and experienced frequent escapes.

"Unfortunately, in our country local authorities are being tolerant of criminal phenomena and, above all, are allowing prisoners to escape and return to illicit activities," said Sen. Roberto Gil, Calderon's former chief of staff.

He singled out states like Coahuila, home of the Piedras Negras prison. The state has been beset by security problems involving drug cartels. On Monday in the Coahila town of Torreon, at least nine people, including a 6-year-old girl, were killed and 22 injured after gunmen opened fire at a graveside funeral. Local security officials blamed the shooting on drug gangs, according to Univision.

It's also the state where the former Gov. Humberto Moreira — ex-president of Pena Nieto’s party and once his key ally — left an enormous debt that media exposés showed were obtained with dubious documents. His brother Ruben succeeded him in office.

The PRI rejected any attempts at punting the problem to the local level.

"The only thing this outbreak does is leave evidence of a failed penitentiary system, like many other tasks of the outgoing government," said PRI heavyweight Manlio Fabio Beltrones, party leader in the lower house of Congress.

"All of the authorities are responsible and above all, we see that the majority of the inmates that escaped are federal inmates."

The federal government operates 12 of the country's 429 prisons, but those only house half of the approximately 40,000 federal inmates — whose alleged crimes pertain to drugs, guns or organized crime.

The rest of the federal inmates are sent to state-run prisons, where they mix with many inmates considered less dangerous. They include many who are imprisoned for minor offenses that often amount to thefts of less than $400, according to one survey. An estimated 40 percent of them have not been convicted of any crimes and are waiting for their cases to wind their way through the country's courts.

Critics say the country's correctional facilities function more as crime colleges, instead of the "Social Re-Adaptation Centers" that Mexican prisons are officially known as.

"No one re-adapts here," the newspaper Milenio reported former lawmaker Humberto Benitez Trevino saying about Mexico's prisons. "The inmates go to prison for having stolen a bicycle or a television and leave as leaders of organized crime groups."

The lawmaker had introduced a motion in Congress to have dangerous inmates sent to the Islas Marias, an island prison colony west of Puerto Vallarta that the government had planned to close down, but put back into service.

"In the past six years more than 1,000 inmates have escaped from state prisons. From federal prisons, none," Calderon tweeted.

"The vulnerability of state justice institutions must be corrected."

Mexican media made light of those vulnerabilities after the jailbreak.

Overcrowding is common, as prisons now hold 28 percent more inmates than there are bunks. But analysts say that isn’t the root of mass jailbreaks.

Also troubling is the rise of self-rule by inmates. Prisoners hold some power in 60 percent of the country’s correctional facilities, including those in Coahuila, according to the National Human Rights Commission.

"What we know about prisons is that organized crime has taken over, at least in our area," said Bishop Raul Vera of Saltillo, whose dioceseused to serve Piedras Negras and whose championing of human rights causes have put him at odds with Coahuila state officials.

Coahuila Public Security Secretary Jorge Luis Moran Delgado claims the Piedras Negras escapees were busted out by Los Zetas to reinforce the cartel's ranks in the state of Tamaulipas as it fends off rivals and military.

Officials in other states have told similar stories of Los Zetas seeking manpower behind bars to explain previous mass prison escapes, says Alejandro Hope, security analyst at the Mexican Center for Competitiveness. But, he adds, "There's no real intelligence behind this allegation."