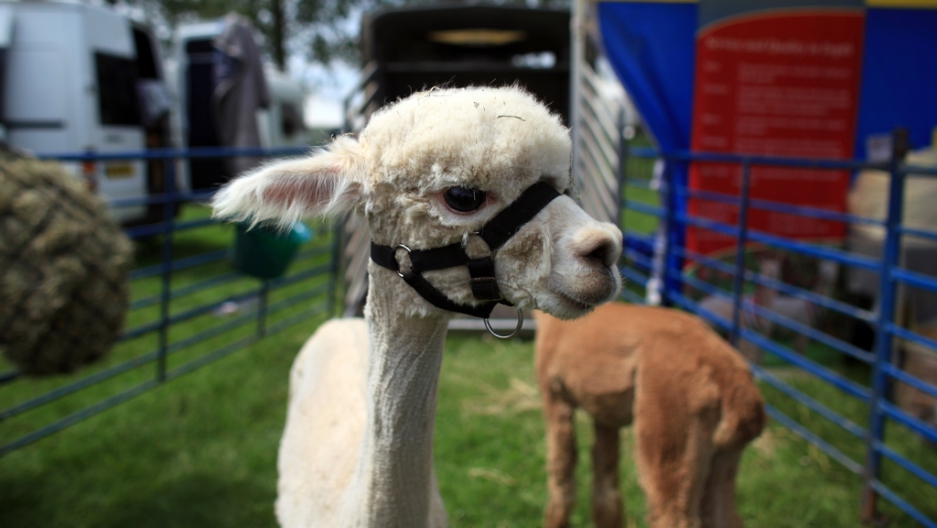 A llama looks out of its pen at the Royal Bath And West Show on May 30, 2012 in Shepton Mallet, England. The four-day show, which opens today, is one of the largest agricultural shows in the UK.
Credit: Matt Cardy
Share

Llama ownership: it's more dangerous than you might think!

A Delaware, Ohio woman was killed this week when her pet llama, rushing to greet her, accidentally slipped on wet pavement, knocking the woman over.

A former coroner, Florence Lanahan hit her head on the pavement and managed to call an ambulance. She had a heart attack and succumbed on the way to the hospital.

The llama, named Baby Doll, is now in need of a new home, as well as Lanahan's other pets. The family is working with the local humane society to rehome them. In case you're in the market for a llama with a sordid past, and really, who isn't?

AP reports that "there's no evidence the llama was acting maliciously." Well, that's good to know.

Although Baby Doll's motives appear to have been pure and she's likely wracked with guilt in her little llama brain, llamas really can be dangerous, especially large males.

In February 2011, a male llama named "Henry" reportedly escaped from his North Carolina pen and threatened two people before being cornered by police. Henry apparently knocked one man down and "tried to stomp" on him. What a desperado.

Meanwhile, in 2009, an unhinged llama attacked a Texas man and savagely bit his leg, an injury which required 700 stiches. Here's video.

Southeast Llama Rescue reports that aggressive llamas may spit, attempt to bite people, and chase them up and down fence-lines, alongside other aberrant behaviors. The rescue also reports only one documented case of indirect Death by Llama, a figure that may have to be revised upward.

Llamas are also useful as guard animals for flocks of sheep. No word on whether they're equally useful for protecting your house—though it's a hell of a lot harder to make a sweater out of your Rottweiler's fur.